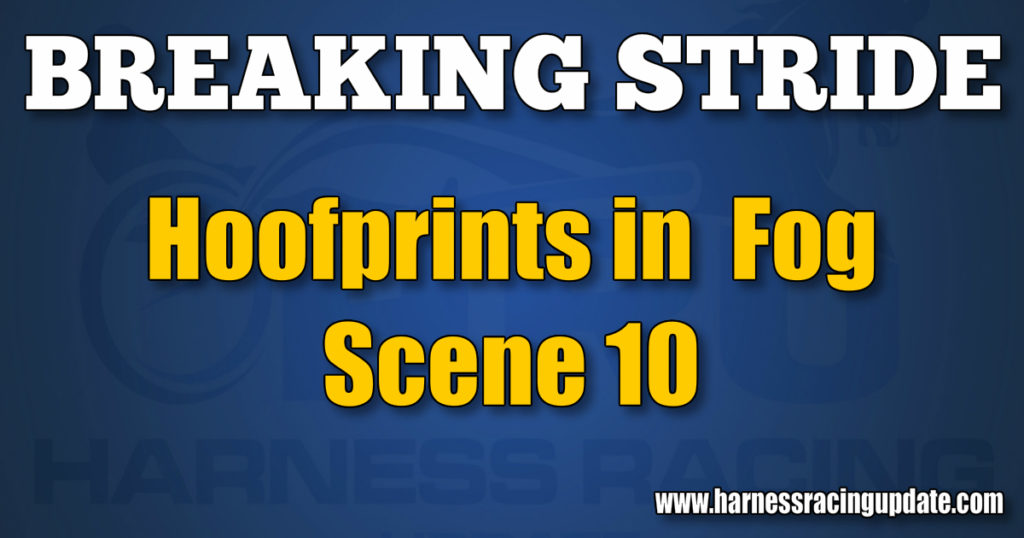 RYAN: I was talking to Brenda, the aide from West Virginia, she’s on tonight, working a double shift. They have him doped up on morphine. She doesn’t think he will make it through the night.

MANDY: (pause, sigh) Has he said anything?

RYAN: Not for two days.

MANDY: (sighs) No more Martin stories. There goes our book.

RYAN: We sit here and know the end is coming, but we sort of fool ourselves, we always think the end is a few days away. Now, it’s maybe just minutes away.

MANDY: I suppose you will have to make all the arrangements.

MANDY: (Pause) Do you think his headstone needs to be that elaborate? That’s gonna cost you a fortune. And, really, Ryan, another headstone for dead horses.

RYAN: The one for the horses is small. I don’t see any point in a funeral home viewing. I can’t think of anybody who would come. He is going to be cremated and buried at the Wilson plot in Easton County, where his wife is. I need to remember to call for a military salute or something because he was an army veteran.

RYAN: (pause, then quietly) Sitting here, in this room, in this place, I’ve had a lot of time to think.

MANDY: Yeah, me too. Thank God for cell phones or I’d have gone nuttier than Martin.

RYAN: I’ve been thinking a lot about, you know, about us. I think we need to move in other directions.

MANDY: (voice raised) Are you serious? After playing Florence Nightengale for an old coot that I don’t even know, then when the finish line is in sight, you’re dumping me?

RYAN: You know we’re not a good fit. We’ve both known it for a while.

MANDY: Does this have to do with Martin?

RYAN: Actually, it does. At least a little bit. Over the past month, you visited him, you were here. You listened to his stories and you acted fine, but you weren’t all in.

MANDY: Oh please, Martin was no mystical being. He was a pitiful wreck, a racetrack drunk with a bad temper. He never made any money, he never did anything that great.He was probably a pain in the ass. If YOU think he was something special, it’s because you want to make him more than he was. Trust me, you’re not some sort of hero in this little freakshow, in this lunatic asylum. (louder) I’m glad he is out of the picture! Okay, there I said it. I’m glad we don’t have to waste our time sitting next to a mumbling, shouting corpse, reminiscing about dead horses and shit that nobody cares about.

RYAN: (pause) I take that as a firm no for his burial.

MANDY: (steely) You can take it any way you want. You want a bulletin…you are not breaking my heart. These weeks, watching you blow smoke about the great Martin and his amazing horses, and his fantastic life, were pathetic. It was like watching a ghoul and his faithful companion. You’re an oddball, you need a life.

RYAN: And you need to put down your God damned phone for five minutes.

MANDY: (four quick footsteps, sounds of door opening) I didn’t want it to end like this. I’ll box up your stuff and leave it in your garage. (sound of door shutting)
(After five seconds, three knocks on door)

RYAN: It’s okay Brenda, the coast is clear. Just a little shower in a relationship.

RYAN: Same, he’s breathing faster. (pause) Do you ever get used to this, the people out of their minds, the sickness, the confusion, the dying?

BRENDA: Everybody’s a tad different. Some get a thick shell. They just get hardened. For them, it’s a job. Some of us, and I think you are one of us, we sort of squint and try to see these folks as they were. Take Martin, I always see him standing next to them damn horses he was always talking about. He’s tall and strong, holding the lines of a horse pawing at the dirt, everything is ahead of them and bright as the sun.

RYAN: (pause) Brenda, I did something crazy.

BRENDA: Sort of like the kerfuffle about the Markle girl and her prince fellow going back to like Henry the Eighth in England.

RYAN: Exactly. Do you remember Martin talking about his horse?

BRENDA: Of course, every day it was Heaven’s Rein this, Heaven’s Rein that. You showed me the gravestone you bought for him and the little stone for his horses. That’s was a nice thing you did.

RYAN: Last week, I began texting back and forth.

RYAN: With people in the harness racing world. I contacted the national organization, called them out of the blue. They were very nice, very helpful. They shuffled me from one person to the next until I got where I wanted to go.

BRENDA: Let me guess, you are gonna ask one of the racetracks to have a race honoring Martin Kilbane. You call and let me know. If I ain’t working, I’ll be there.

BRENDA: You’re going to ask them to do a race honoring his racehorse?

RYAN: Nope, crazier than that. I can’t believe it did it.

RYAN: The organization put me in touch with a pedigree expert. His name is Artie Murphy. He’s an older fellow (chuckles lightly) and he has more racetrack stories than Martin. I asked Artie to give me a list of horses who have bloodlines that connect directly to Heavens Rein, young horses that will be for sale at an auction soon. He sent me a list of four, four baby trotting horses that have a lineage that goes back to Heaven’s Rein.

BRENDA: Oh my God, don’t tell me you are going to buy a racehorse.

RYAN: I am. Swear to God, I am. I will buy one of these four yearlings. I don’t know much about the harness racing game, or the sport or whatever the hell it is, but I’ll find my way. I will buy a horse and hire people to help take care of it and race it. It’ll be an adventure. I’m looking forward to trying this.

BRENDA: (pause, gives a low whistle) Well, that should be interesting. I think it will be good for you. I know Mister Martin would be happy…racing was in his blood, maybe it’s in yours.

RYAN: Maybe it is, maybe it is.

…Thank you for listening to Hoofprints in the Fog.

This story was performed by: