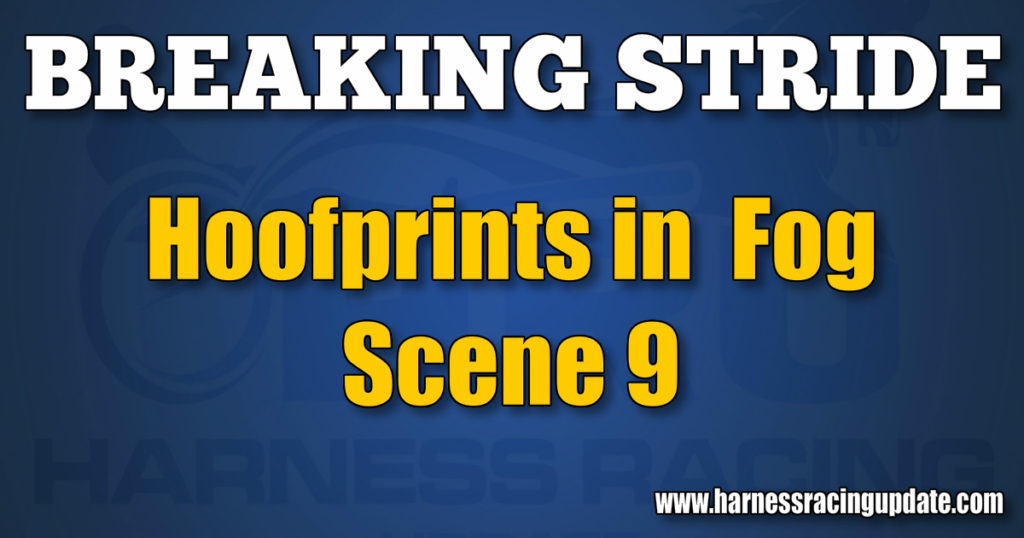 (Hospital ambient background, slurping sound at the bottom of a cup)

MANDY: If you want some more, they left you juice boxes. I can grab a cup and some ice.

RYAN: What happened in the third race between Heaven’s Rein, and what was the other horse…

MARTIN: (weakly) Back to drinking.

MARTIN: With me, there wasn’t any good drinking.

MARTIN: Not much of a struggle, when things went bad, I gave up the fight. And that third race was all the excuse I needed to feel sorry for myself.

RYAN: What happened, we don’t know the story.

MARTIN: Not much of a story. If it is, it’s a tragedy. On the day of that third race, the gamblers had Emily the favorite. Heaven was the second choice. My hopes were high that we would finally get the best of Emily because we drew best this time and Emily would need to come from behind. Sure enough, Heaven leaves out behind the starting gate with three other horses, all four are neck to neck in the first turn, when out of the sky, a goose, a big grey goose with a white chest swoops down and looks like he is going to land on the racetrack right in front of the racing horses. That damned bird spooked all four horses, two of them ran, but didn’t have no place to go so they tangled up, stumbling and crashing into each other, it was lucky nobody went down. Everything happened so fast.

RYAN: The accident took Heaven’s Rein out of the race.

MARTIN: (slowly) That crash of speeding horses took us out of racing. In that commotion, Heaven hurt a tendon in her ankle, hurt it bad. She never raced again.

MARTIN: The meetings went on. The horse folks kept on racing horses. I ran away.

MANDY: Ran to where?

MARTIN: To Peggy’s. She’s my sister. Peggy, and her husband, Cecil, took me in. They always took me at the low times.

RYAN: (tentatively) Do you know they were my aunt and uncle, well technically my great aunt and great uncle?

MARTIN: (pause as he struggles to remember) I didn’t know, maybe I knew once. So we are kin? You and me? Is the girl kin to us?

RYAN: Do you know where you are?

RYAN: You are just outside of Detroit, you’re less than five miles from where Cecil and Peggy lived.

MARTIN: Lived? Are they gone?

MANDY: (fills a momentary void, chirps) How long did you stay with your sister after Heaven got hurt?

MARTIN: Not long, a few weeks. I never meant to bother them, and I was a bother. It was four blocks from Cecil’s front door to Sullivan’s Bar. Poor Cecil, he would get a call, throw on his jacket, and show up with a big wheelbarrow to haul me back to his house and lay me on a cot in his garage. Didn’t Cecil tell you this?

RYAN: No, he never told me much about you, just that you were a racetrack worker and, I remember this, he always said that, “Martin Kilbanes life was more checkered than a flannel shirt.”

MANDY: Then what? After two weeks back here?

MARTIN: Then I got a postcard from Euley K. Dobbs. Later on, Euley told me he got Cecil’s address from the hospital’s next of kin list, from the time my head was split.

MANDY: What did it say?

MARTIN: Heaven needs you at the farm.

MARTIN: He was a fine man; he would not give up on me. I don’t know why. I’d already let him down three times.

MANDY: So you went back to the racetrack?

MARTIN: No, not the racetrack, the note said to go to his farm, the farm where he grew baby horses. That’s where he took Heaven after she hurt her leg. He had it all planned out. Heaven was going to be a mother. Euley knew how good she was, he wanted to race her babies. He also knew that I wasn’t ready for the racetrack. There were three of us who worked full time on his farm. We slept in a room attached to the big barn. The other two fellas, Luke and Spud, did not drink, so he must have felt my chances were better.

MANDY: Everyone with addictions should have a Euley Dobbs.

MARTIN: Amen. Just like the other times, when I showed up at his farm, feeling lower than a snake’s belly, Euley did not say much, he just told me to stick my hand out. I thought he was gonna shake my hand, but instead, he plopped a roll of quarters from the bank, the kind that was inside a tube of blue paper. Then handed me a bus schedule and said that if I left the farm at 5, it was a half-hour walk to the corner of Elm and Grant. At 5:45, the bus would take me right to the meeting. I would be in plenty of time for the meeting at 7, but I would need to leave the meeting early, at 8:10, because the last bus back left at 8:15.

MANDY: You never made the entire meeting?

MARTIN: No, but it’s the going to the meetings that’s more important than being at the meeting. The farm was thirty-one miles from the racetrack and thirty-two miles from the meetings in the Church basement. Distance ain’t much of a problem for a fellow desperate for a drink, but being out there in the country was a help. I made that trip almost every day for three years.

MANDY: And Heaven’s first baby, that must have been a great day.

MARTIN: I was a terrible day, she lost her first baby. I found it in the snow one morning, with Heaven standing above the little colt. I buried the baby myself.

RYAN: Jesus, Martin…can’t you ever finish a story on a high note?

MARTIN: Sure, I’ll finish this one with a couple. Heaven got in foal again. The second time she had another colt, a fine colt that I named, Heavenly Days. That colt grew up and won over $100,000 on the racetrack.

MARTIN: I never had another drink.