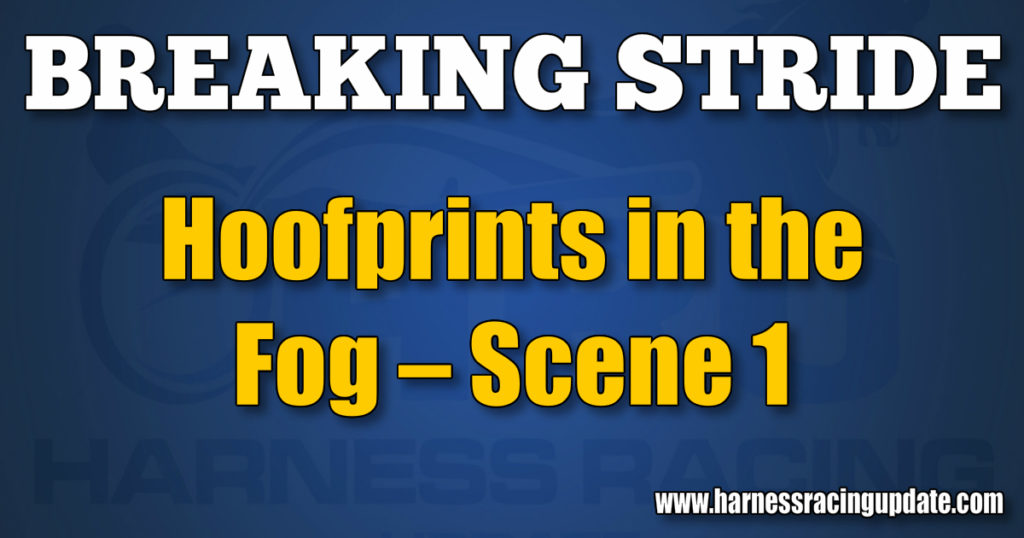 Note #1 (*originally written (not purchased) as a theatrical play.DJ Mortenson of MCA suggests the Alzheimer’s segments beginning with scene 2 filmed dramatically as a segue to historic events.)

Mandy and Ryan, an unmarried couple in their twenties, reside in the suburbs of Detroit. Ryan is a pharmacist, pleasant looking, and reflective. Despite growing up in a dysfunctional family, he has made good choices in his young life. Mandy, attractive, is constantly checking her cell phone. She is immature, moody, and currently working as a beautician assistant. She is pushing Ryan to allow her to move into his apartment. Ryan is resisting.

It is late afternoon in a small room in the Alzheimer’s wing of an assisted living facility. Ryan sits in one of two matching green plastic chairs, a small table between them. Their chairs pinch inwards and face a hospital bed. In the bed is a sleeping patient. The frail patient, a former horse trainer, is levered to an angle halfway between laying and sitting.

(very light ambient hospital background for the remainder of the scene, open with three softknocks on the door, then sound of door opening)

MANDY: (sigh) I had trouble finding the place. I didn’t expect it to be so small, with just one floor. It’s like an old elementary school.

RYAN: The flatter the floors, the fewer the falls. Taking care of people with dementia is no picnic. Buckle up girl, some crazy stuff happens in here.

RYAN: Like the fire exits; they have sirens, loud ones. When a patient tries to escape, all hell breaks loose.

MANDY: (slight pause) So… this is your great-grandfather. How old IS he?

MANDY: Does he know who you are?

MANDY: Does he talk?

RYAN: Depends on the day. He’s like a car radio searching for a signal, sometimes nothing, sometimes static, other times he gets fairly strong and his mind is off to the races,reallyoff to the races, horse races. It’s interesting.

MANDY: It’s creepy. This whole place is creepy. How often do you come?

RYAN: Most days, on my way home from work.

MANDY: Are you close?

RYAN: No, not really, I never met him until he was like 80. One day, when I was a kid, he showed up at my uncle Cecil’s house. Cecil said he was my great-grandpa and told me to shake his hand. Then he said Martin was a racetrack roamer who came home to roost.

MANDY: What brought him home?

RYAN: A funeral, a sad one. Cecil’s wife, my aunt Peggy, died. After they buried Aunt Peggy, uncle Cecil invited Martin to move into a spare room in the old house. (chuckles) Man, those two old coots could rag on each other. Not in a mean way, it was just their way.”

MANDY: Was Cecil’s house where you stayed…you know… when things got rough at your house?

RYAN: Yeah, Cecil helped me plenty. He died last year. When they sold his house,Martin got dumped here.

MANDY: (pouty) Well, why is he your problem?

RYAN: (sharply) He’s not a problem, he’s a person. He doesn’t have anyone else, you’ve met my family. They wouldn’t come unless they saw money stapled to his pillow and an open bar in the lobby.

MANDY: Doesn’t he have ANYONE else?

RYAN: Nope, and that’s probably a good thing. Alzheimer’s is a frigging nightmare. His first week, he was awful, yelling and swearing. They needed to tie him down. They have him on some medication and the past month or so he’s been more manageable. But he’s unpredictable, two weeks ago he threw his box across the room.

RYAN: This cigar box has everything he owns: an old wedding photo, a picture of his wife, dog tags, newspaper clippings, gold star, strange medallions, racing programs, and this pocket watch.

MANDY: How sad… a whole life… in a little box… in a place like this.

RYAN: After he threw it, he got upset, he was crying and yelling for his watch. He never let it go. Lots of times, he falls asleep with the box on his chest.

MANDY: What do you talk about with him?

RYAN: (sighs) He tells stories, most are good. (pause). It’s weird. They almost always have something to do with horses.

RYAN: (nods) Yep, even his army years were about horses. He was in the war, World War II. You know… the one with the Nazis and Pearl Harbor.

MANDY: So he gets that PTSD flashback thing?

RYAN: Maybe, I don’t know. His army memories can agitate him.

(They do not say anything for a few seconds)

RYAN: He always begins talking about the army by saying… (use a voice change for this quote) When the Army found out I was a farm boy who knew how to shoe horses, they stuck me in the cavalry. (return to normal voice) Then he talks about getting sick on a ship to Luzon, about Lieutenant Eddie, about tending to horses, about the boys of the 26th, and his horse PEP. I’ve heard this at least three times.

MANDY: Is it true?

RYAN: I googled the 26th Cavalry.

MANDY: Wow, that sounds like a movie on NETFLIX.

RYAN: There are a few photos.

MANDY: Let me see (pause). He could have been like Brad Pitt in, what was that movie… Ignorant Bastards.

RYAN: In GLORIOUS Bastards…The strange thing is sometimes when he begins to talk he kind of goes into a trance. The details are incredible. How does he remember all this stuff? I mean, I can’t remember the last name of my college roommate. Yet now, when he has this terrible disease, when he may not remember his name, HE IS THERE, everything is in his brain, crystal clear — like old movies he replays.

MANDY: (pause) It must have been awful, you know, war, real war, close up.

RYAN: Hand me my phone, (pause) listen to this, (reads)…Resistance against the 26th Calvary was not without costs. Due to a shortage of food, they found it necessary to butcher their mounts.

MANDY: Oh my God! He had to eat his horse, Pep.

RYAN: I’m figuring that for a long time, the war was like when you and I were in kindergarten. We know we went to kindergarten, we know things happened in kindergarten, but it’s gone. Somehow, with this terrible disease it all comes back. It’s crazy Mandy, all those memories are in his head, they are in everyone’s head, like computer files that can be plugged back in.

MANDY: Tell me about one of his good memories.

RYAN: Well, let’s see, one is about his wife and their courtship, others are about racehorses, and racetrack adventures, some of his problems, including jail. Which memories do you want?

MANDY: Their COURTSHIP, I need to know how she got her man. Maybe I can get a few pointers.

(sound of a phone ringing.)

RYAN: (exasperated) Come on, Mandy, put it away. Let ME give you a pointer… don’t interrupt a conversation with your phone.

RYAN: For you, they’re all important.

MANDY: Okay, okay, where were we?

RYAN: I was about to tell you about a courtship, a horse, and a buggy ride that took place in 1939.

(we hear Martin rustling in his bed, hear him moan, clear his throat and begin to mumble)

MANDY: (excited) Oh my God, He’s waking up, what should we do?

RYAN: Nothing, give him a minute or two. If you’re lucky, Martin will tell you about that buggy ride. He tells it better than I could. And it’s a story you will never forget. (pause) Martin, Martin…