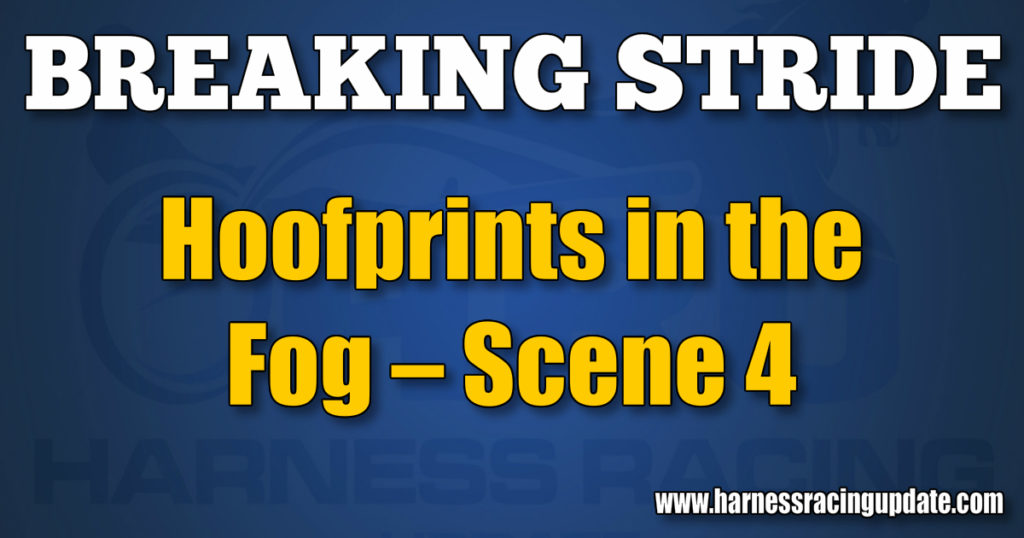 The setting is a room in an Alzheimer’s ward. A young couple continues to visit an old horse trainer, Martin Kilbane. In his lucid periods, Martin describes events in his life with remarkable clarity.

In earlier sessions, he has talked about serving in the U.S. cavalry, the death of his young wife, and his struggle with alcohol.

MANDY: (calls down the hall – indicate with an echo of voice) Ryan, Ryan, wait up! (footsteps in the hallway)

RYAN: Don’t know, I was just about to go in. Hey, before we go inside, what was that idea you teased me about before we left last night?

MANDY: Why don’t we record his stories? A push of a button on our phone to start, another push to stop. He’s not going to be around much longer. When he dies, his stories die. That’s a shame. It’s amazing the way he remembers details. It’s like listening to a book

RYAN: And do what with them?

MANDY: I don’t know, store them, so they don’t just vanish. Maybe we could make them into a book.

MANDY: (coyly) Damn right, I’m a very impressive woman, not to mention attractive and available for a certain male who should wake up and smell the roses.

RYAN: Would you do the recording? Nobody handles a phone the way you do.

MANDY: I’ll take that as a compliment.

RYAN: Don’t. Until I glue a phone to my forehead, you’ll always have a roving eye.

MANDY: With a phone stuck to your forehead, you would be a fascinating boyfriend. (pause) Did you know he was a blackout drunk?

RYAN: Nope, he was old when I met him. He seemed to live on coffee and Cheerios.

MANDY: Did he sober up to get a horse? That sounds too simple.

RYAN: I don’t think it was simple, but he did get the horse, I looked it up. Let’s go in and ask him. If he’s talking today, if he starts to tell a story, hit record.

(Sounds of door knocking, footsteps, then of Mandy fluffing his pillow)

MANDY: Hello Martin, are you having a good day?

RYAN: You were about to tell us how you got your racehorse.

MARTIN: Who? Who are you?

MANDY: That’s Ryan, he’s your great-grandson. I’m Mandy, a friend. We enjoy visiting with you. Last time you were telling us about a rich man giving you a racehorse after you got clobbered with a bottle. Remember…the man who helped you?

MANDY: He gave you the trotting horse.

(Pause as Martin struggles to remember)

MARTIN: (stronger) Euley K. Dobbs gave a lot of us a lot of things. He gave some of us our lives back.

MANDY: It sounds to me like he sent you to an AA meeting.

MARTIN: In 1954, we just called it the Fellowship group, or just the fellowship. We were copying a group that started in Akron. Up till then, most drunks just stumbled along. I stumbled more than most. When I was on the sauce, which was all of the time, I was a sorry excuse for a man.

MARTIN: I was jittery as a June bug. Luckily for me, standing next to the coffee pot, I saw another tall guy in a floppy suit, another groom from around the racetrack circuit. He recognized me, strolled over to talk, and reminded me that his name was Ted. I can still see his face clear as yours. It helped to talk about racetrack gossip. Horses, racing, Lordy be, the backstretch of a racetrack is a fountain that never runs dry. Some racetrack folks keep their heads down and listen. (he chuckles). But Ted was a talker. As we talked, somebody strolled in holding an apple pie with a little candle stuck in the middle to celebrate Ted’s one-month anniversary of sobriety. One month may not sound like a big deal to you, but it is.

MANDY: Then, what happened?

MARTIN: The leader said to have a seat, said a few words, and then everybody read the pledge from little cards. Then the leader asked if anyone wanted to talk. After a few minutes, a fellow said his first name, we don’t say our last names, and then he said he was an alcoholic. He said something about his wife and kids but didn’t get far when he started to cry. That first night, I was the fourth person to talk. I didn’t cry but rambled like a fool.

MANDY: What did you say?

MARTIN: I told them that I was a member of the 26thCavalry, that I fought from a horse, I’d seen men die, and that my wife died. I told them that I began to drink after her death and had not stopped, couldn’t stop. The group, I think there were about a dozen, were not impressed. They had seen others fall farther, faster. To them, I was just Martin, who like everyone else in the room was a drunk scared of tomorrow.

MARTIN: Sure. Mostly I was afraid of losing my job with the horses even though Euley K. Dobbs said he would stick with me. I remember Ted stood up and gave his talk. He thanked them for the pie and told them how he worked at the racetrack. How we started early in the morning around six, worked with the horses, harness racehorses, and then sometimes, if they were racing, we worked some more. Then some other fellows talked.

MANDY: Were there any women?

MARTIN: I don’t recall any at first. Years later ladies began drifting in. After the first meeting, I walked out the door with Ted. He said that if I ever needed help that I should look him up, that if he was not in barn C and if they didn’t know where he was, to leave a note in his box in the tack room.

MANDY: Was he your sponsor?

MARTIN: No, Ted was too green. But it gave me some courage to know Ted was there and that we were traveling the same road.

RYAN: The road to recovery?

MARTIN: It was a short road for me. I got loaded two days after my first Fellowship meeting, woke up on the straw in a stall with a mare looking down at me. It’s a wonder she did not stomp the stupid out of me that night.

MARTIN: I had my best chance to do right, and I did not last TWO days. NOT TWO DAYS. It shamed me so much that I couldn’t show my face at the racetrack. When the sun came out, I just pulled my cap down over my head, threw my duffle over my shoulder, and headed down the road to the trainyard to hop a train, any train, to wherever it took me.

MARTIN: About a mile down the road, a big black Lincoln Continental passed me from behind and rolled to a stop on the berm. The car just idled with the exhaust coming out in little clouds. Then the driver’s door opened, and Euley K. Dobbs got out. He walked back to me, threw his meaty arm around my shoulder, and walked me to his car.

MANDY: What did he say?

MARTIN: He didn’t say one single word. Neither did I. He didn’t smile. He didn’t frown. The car was as quiet as a tomb while he drove me back to the racetrack. I got out of the car, shut the door, and he just drove away.

MANDY: So you showed up at the next meeting?

MARTIN: No. On the way to the next meeting, I got drunk again.

MARTIN: Being an alcoholic is ridiculous.

MANDY: How long did this go on?

MARTIN: I would go to a meeting and then slip back. But one day Freddy J showed up, and he told the story of another horse, another racetrack, another time. Freddy changed everything.

(Martin drifts off to sleep, soft snoring and hospital sounds)

RYAN: (chuckles) Maybe he does it to make sure you keep coming for visits, like a cliffhanger or clickbait. He did the same thing to me before you started visiting, same stories, same cliffhangers.

MANDY: Does it all check out? What he says?

RYAN: That was his life (chuckles). I had that same chat that you just had a week ago, pretty much word for word. Did you record it?

MANDY: Of course (taps phone). What should I name the file?

RYAN: His story is a long way from done.