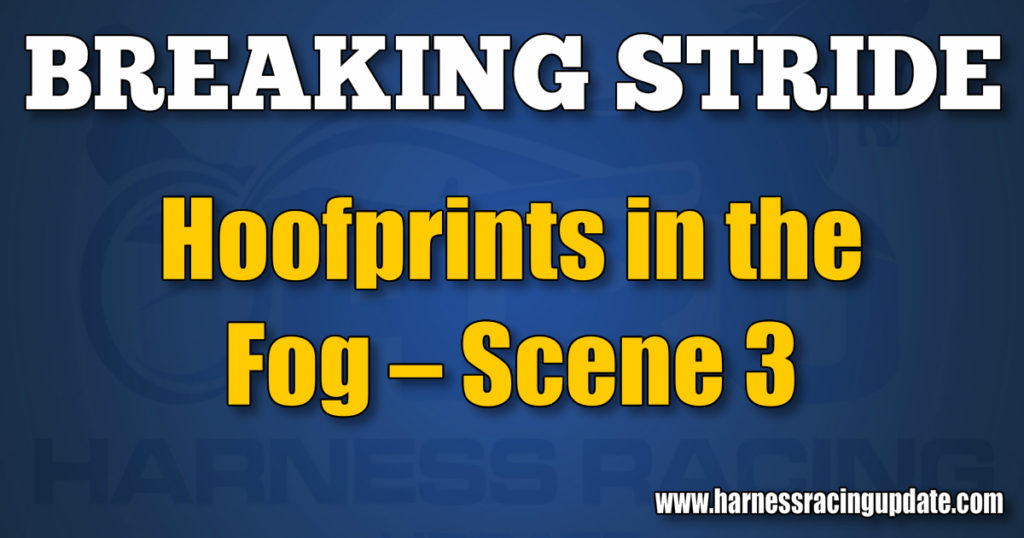 The setting is a room in an Alzheimer’s ward. A young couple continues to visit an old horse trainer, Martin Kilbane. In his lucid periods, Martin tells of adventures in his life. In scene one (full story here), he spoke about his time in the U.S. cavalry, in the second scene (full story here), he described meeting his late wife. Today, a decade after these memories, the couple learns Martin has traveled a rough road down the racetrack backstretch.

(Light ambient hospital background, quick knock on the door, then footsteps on a tile floor)

RYAN: You decided to come back for a sequel. Have a seat, he’s been napping.

MANDY: Yesterday was unreal, it was like somebody plugged him in. For a while, Martin WAS driving that buggy, and he WAS sitting behind that horse with his sweetheart next to him. That WAS his reality, as real as you and me sitting in this room.

RYAN: You never know where his mind will be. Some days he doesn’t talk. Sometimes we can nudge him along with specific phrases.

MANDY: (whispers) What’s with all the horse stuff?

RYAN: He was around them every day of his life. A lot of people believe there is a magical connection between some people and horses.

MANDY: (sighs) Watching him yesterday, holding his hand and listening to him talk about his wife at first upset me. Then it was almost magical. Tell me about the racehorse, what was the name?

MARTIN: Yawns, begins to stir, coughs, and clears his throat.

RYAN: (two steps) Martin, do you know who I am?

MARTIN: (pause) You’re the one who comes here.

RYAN: Yeah, that’s me. And this is Mandy. Mandy wants to know about Heaven’s Rein.

MARTIN: (loudly) Heaven was the best damned trotting filly there ever was.

MANDY: Was she your horse?

MARTIN: Yes, she was. I got Heaven because I was a drunk. That mare saved my life. I got her in ‘55 but she didn’t have her first race until ‘57.

MANDY: In the Kentucky Derby?

MARTIN: NO, NO, she was a TROTTING horse.

RYAN: The kind where the horse pulls a cart.

MARTIN: Gimme your hand young lady. Feel here, right here, behind my ear, feel that scar, you feel that?

MARTIN: In the summer of ‘54, a drunk smashed a beer bottle against my head in a roadhouse in Jefferson Parrish, Louisiana. I don’t remember who swung it, or why it got swung, but in those days, I didn’t remember much after the sun went down.

MANDY: What were you doing in Louisiana?

MARTIN: Getting horses ready to race for Euley K Dobbs. Mister Dobbs sent me with one of his trainers, Lester Davis, who we called Big Flea, and two other grooms, all the way from Chicago. We all rode down in special train cars. We were going to race in the opening season of a new racetrack named Magnolia Park.

RYAN: In Louisiana? There were trotting races in Louisiana.

MARTIN: Not for long, they only raced for one year. In ‘56 they changed the name to Jefferson Downs and raced thoroughbreds. The place was jinxed. It got hit by a hurricane, they dried the place out and then it burnt down. None of that mattered to me. I never even made it to the racetrack.

MARTIN: My head. The track vet sewed up the split on my thick skull, but that crack left me feeling bad. I kept getting sick, throwing up to beat the band. I did my usual doctoring with Jim Beam and beer. Things got so bad that Flea Davis hauled me to the train station, stuck a five-dollar bill, and a one-way ticket back to Chicago into my pocket.

MARTIN: To get rid of my drunken ass.

MARTIN:I got off the train in Chicago and did not walk three blocks before I found a hooch house. A hooch house and a five-dollar bill in my pocket was a nail to a magnet. Next thing I know, I opened my eyes in a hospital bed. You would never guess who was standing in front of me.

MARTIN: Euley K Dobbs.He was sitting in a chair, just like you two are sitting right now. But instead of two young people looking at an old man, he was a fat, half-bald man of about sixty wearing a fancy suit with a vest and gold watch chain looking at a 35-year-old drunk.

MANDY: Your boss from the racetrack?

MARTIN: He was the boss of my boss. Euley K Dobbs owned about fifty racehorses. Seeing Mr. Dobbs walk over and stand by that hospital bed was strange. I thought I was dreaming. I never spoke a single word to him in my life. I’d SEEN him from time to time at the racetrack, but there was not a single reason for him to be in that hospital room.

MANDY: What did he say?

MARTIN: Plenty. He did all the talking, I remember damn near every word. I just laid there and stared up at him.

MARTIN: (speaks slowly). He said, “Martin, I know four things about you – you are an army veteran, your wife died before you came home from the war, you are a fine horseman, and you are an alcoholic. I’m going to talk to you about the last thing. I’m going to talk from experience and tell you something that only my close friends and fellow travelers know. I’m an alcoholic, just like you. I’ve been sober for over twelve years, but I will always be an alcoholic. That’s enough talk about me, now let’s talk about you.”

MANDY: Oh, my god. I feel like I’m listening to one of those books on tape, and Euley Dobbs was your guardian angel.

MARTIN: Mister Dobbs slid a piece of paper into the pocket of my hospital robe and said, “Your job at the racetrack will be waiting when you are released from the hospital. I want you to make a promise, not a promise to me, but a promise to yourself. Martin, there is an address on that paper. Every night at 7:30 there is a meeting in the basement of that building, a meeting for folks like you and me. If you go to a meeting, and I hope you do, you will see me. I’m not going to say much more about the meeting. I know that right now your life seems hopeless. Maybe it is, maybe it isn’t, but I will make you a promise – if you can make it through six-months of meetings, you will receive a coin, like this coin. When you receive that coin, you will receive a young trotting horse.”

(Martin give a big yawn , closes his eyes, yawns again, and drifts off to sleep).

(quiet, sound of tapping on her phone).

RYAN: Your phone again? What are you looking for now?

RYAN: Nah, be patient, let Martin tell his story. He’s told it to me more than once.

MANDY: I’m not a patient person. He may never wake up.

RYAN: He will. If he doesn’t, I’ll tell you his story.

MANDY: I can guess, it’s obvious to anyone who ever watched a movie. Martin gets sober, he gets the horse, the horse is a champion, he makes a lot of money, finds a new wife, and lives happily ever after.

RYAN: No, not even one of those things came completely true. It’s complicated. When the story comes in small doses, it’s easier to follow. Plus, the story means more when the person who has lived the life says the words. And it was a helluva life.”

MANDY: (excited) I have a great idea. An idea for Martin, for all of us.