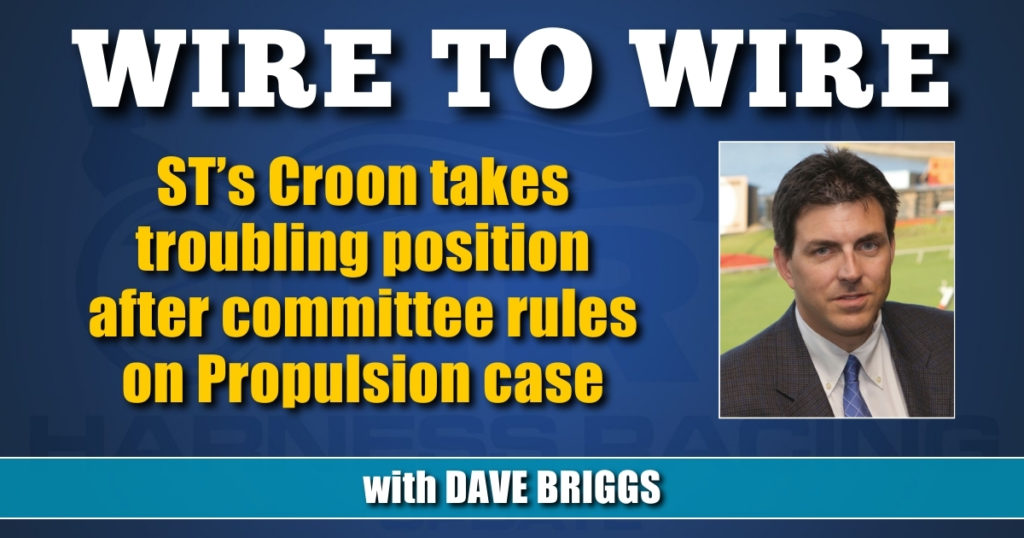 Propulsion’s owners will have to pay back some $3 million (U.S.) the trotter earned while racing in Europe, but trainer Daniel Redén will not be punished despite being found guilty of competing with a horse not eligible to start. But there’s concern about the stance Svensk Travsport CEO Mario Croon has taken on the case for all those racing horses in Sweden.

Maria Croon, the CEO of Swedish racing authority Svensk Travsport (ST), appears to be taking a troubling new position on trainer responsibility in Sweden in the wake of a decision on the Propulsion case.

Swedish trotting publication Travronden reported Friday (Sept. 24) (full story here) that the Swedish Trotting Sports Responsibility and Disciplinary Committee (STAD) has ruled Stall Zet, the owner of trotting star Propulsion, will have to repay some SEK 26.3 million (just over $3 million U.S.) in money earned while racing in Sweden. Trainer Daniel Redén, while convicted of competing with a horse not eligible to start, will not face punishment.

Stall Zet’s lawyer said he will appeal the decision to return the purse money to the courts.

STAD’s ruling to not punish Redén seems fair considering there is no evidence the trainer knew Propulsion underwent a nerve procedure in the United States before the horse was purchased by Stall Zet and exported to race in Sweden. The procedure was not disclosed before the horse was purchased, but it was clearly indicated on the horse’s export certificate (view certificate here) sent to ST. Redén has said he did not receive a copy of the export certificate — and there’s no evidence he did. However, we do know ST received it.

It appears ST failed to examine the document properly and allowed the horse to race in Sweden for five years despite the fact horses that have been nerved have long been banned from racing in the country.

I understand the trainer responsibility rule is a crucial one to protect animal welfare. Someone has to be responsible for each horse’s care and that’s the agreement those that put themselves down as trainer must accept. But, clearly, ST’s failure to properly examine important documents and uphold its own rules played a part in the disciplinary committee’s decision to find Redén guilty, but impose no punishment.

It’s also, likely, fair that purse money be returned — though the Swedish courts may decide differently. Propulsion earned money while being ineligible to do so based on Swedish rule. The connections of horses that finished behind him, likely, deserve that money. That money has already been paid out by ST and now ST is trying to collect from Stall Zet to cover it.

The good news in all this, if we believe Croon, is that ST has improved its procedures for examining documents. There’s little doubt ST was at least culpable in the debacle.

“It is clear that this could have been noticed,” she told Travronden in an article translated into English by Google. “We have reported this and we have taken responsibility for changing precisely those processes.”

The more troubling part is Croon’s position on ST’s role in future cases.

So, ST has rules and does not enforce them? Funny, they seem to be all about enforcing rules when it comes to its strict doping and whipping rules.

Obviously, ST enforces numerous other rules that determine whether horses are eligible for competition. Now it is hands off on this one?

I might buy Croon’s position that it’s okay to bring nerved animals into Sweden IF she represented an overall agricultural body responsible for overseeing the importing of general livestock. As long as applicable importation rules (quarantine, testing for diseases, etc.) are followed, people can certainly bring horses into the country for pleasure or work purposes that aren’t competing for prize money.

However, ST is strictly a racing-based regulator that determines what is allowed as it pertains to horses in competition. It has a duty to protect the betting public, the horses themselves and the participants.

All along Croon has taken a position that it was all Redén’s fault, not that of her association, despite the evidence suggesting otherwise.

Now, while grudgingly admitting mistakes were made at ST, Croon appears to pre-emptively covering ST’s behind and attempting to shift all responsibility away from ST enforcing its own rules in future cases.

That — and many other blunders in this case — should make everyone that races horses in Sweden nervous.