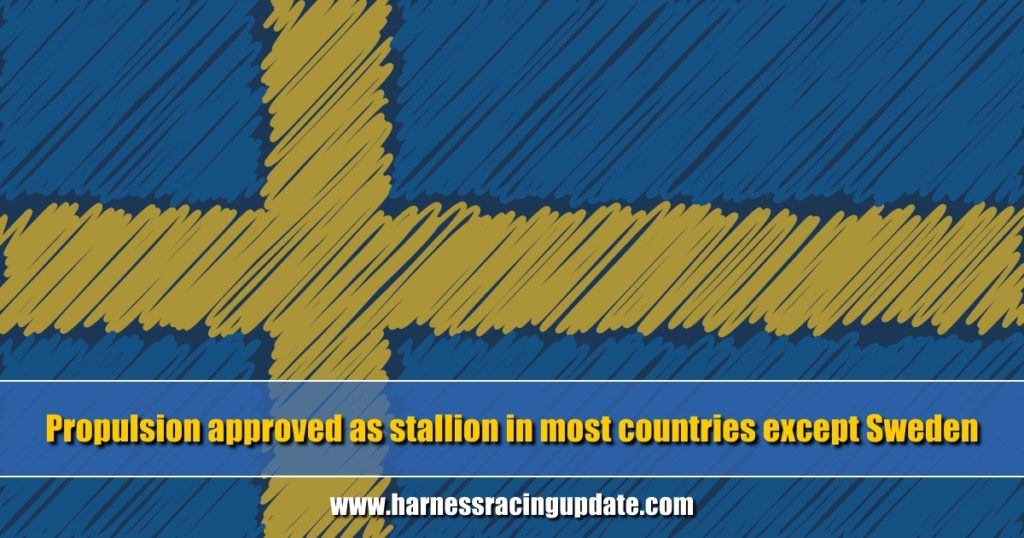 Propulsion approved as stallion in most countries except Sweden

Propulsion starred in Sweden under the direction of trainer Daniel Redén, but that is one of the few European trotting countries where the horse is now banned as a stallion.

This week, Finland and Germany ruled Propulsion — who is now standing his first season at Deo Volente Farm in New Jersey — is allowed to breed mares in those countries via frozen semen. Previously, he had been approved to breed via frozen semen in Norway, Belgium, Denmark, the Netherlands and Italy. France’s stud book is closed to those standing outside the country.

Propulsion is also allowed to breed in the U.S. and Canada.

The trotter began his stallion career in Sweden while continuing to race. He has produced three crops in Sweden, including the ones to be born this year. All three of those crops are allowed to race in Sweden.

However, in October of 2020, Propulsion was banned from standing in Sweden or breeding mares in that country in the future via frozen semen after Sweden’s racing authority Svenskt Travsport (ST) also ruled he had been disqualified in all 45 Swedish starts — including his 2020 “victory” in the Elitloppet — and his connections were ordered to return some $2.9 million (U.S.) (SEK 26 million) (full story here). Many years after he began racing in Sweden, ST discovered the American-born trotter had undergone a nerve procedure in the United States before being sold to his current Swedish owner, Brixton Medical AB — even though the procedure was clearly disclosed to ST by the U.S. Trotting Association (USTA) in the horse’s export certificate (full story here).

Propulsion’s Swedish connections have said they were unaware Propulsion had been nerved before they purchased the horse at auction because it had not been disclosed before the sale by the USTA (full story here).

ST has, reportedly, invoiced Brixton Medical AB to return the purse money and the association has paid the owners of horses that finished behind Propulsion in his races in Sweden.

Meanwhile, Propulsion’s stud career continues unabated in all countries except the one in which he became a superstar.