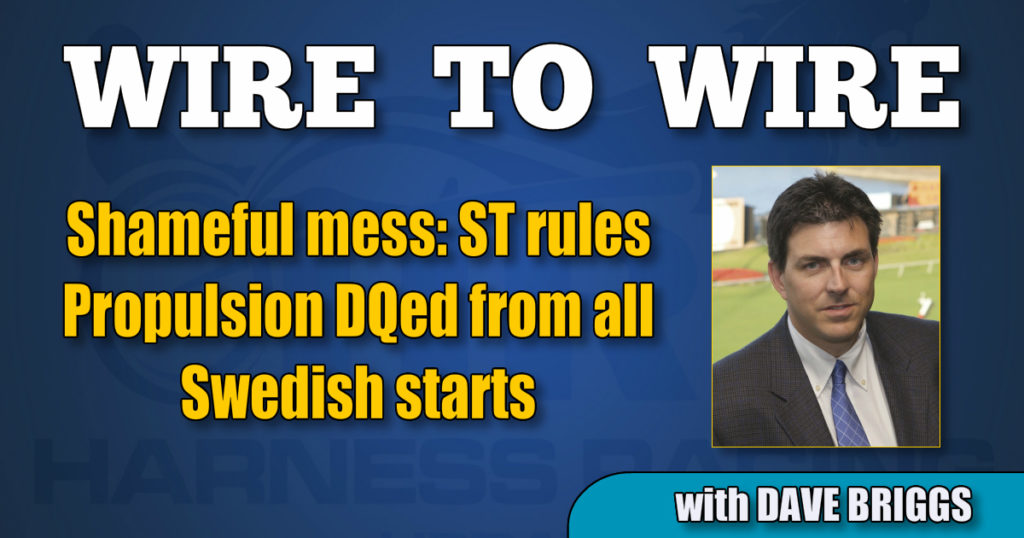 Owner Stall Zet (Brixton Medical AB) must return some $2.9 million (U.S.) earned in 45 starts in Sweden over five years due to a nerve procedure the trotter had in the United States before being acquired by his current connections. Yet, Svensk Travsport fails to hold itself accountable for its many shortcomings in the case.

Despite the complications and extenuating circumstances in the case of Elitloppet winner Propulsion, I figured it would end up this way, with the horse disqualified in all 45 Swedish starts and an order to return some $2.9 million (U.S.) (SEK 26 million) — and the likelihood of Finland and France following suit for money Propulsion earned in those countries.

The trainer responsibility rule, despite its flaws, is a universal, accepted truth of horse racing because animals must be protected. Since they can’t speak, someone must be responsible for their well-being. It’s the contract all trainers accept when they put their names down on a horse. Since horses are the lifeblood of the industry, it’s a critical rule.

So, despite the fact this was clearly an inadvertent breaking of Sweden’s rule, the fact the rule was broken was indisputable and I expected some kind of punishment and some redistribution of the purse money to those that did not break the rule. That’s only right.

The science about whether a long-ago nerve procedure helped Propulsion become a European superstar — I believe expert equine surgeon Dr. Patty Hogan when she says it did not — is a side issue here. The rule is clear and it was clearly broken. If you don’t like the rule, change it. Until then, you’re stuck with it.

But that doesn’t make Thursday’s decision handed down by Sweden racing authority Svensk Travsport (ST) any easier to accept and it certainly shouldn’t absolve ST and its leadership — looking at you CEO Maria Croon; you’re in charge — from taking a serious examination of its many, many failings in the case.

ST’s biggest shortcoming was the fact it failed to properly review the USTA’s export certificate it received five years ago, before Propulsion ever raced in Sweden. That certificate clearly stated Propulsion had undergone a nerve procedure in the United States that, by Swedish rules, made him ineligible to race in that country. Had ST done its job five years ago, none of this would have happened. Propulsion’s trainer, Daniel Redén, would have been informed that Propulsion was ineligible due to the procedure — something, clearly, Redén did not know about before purchasing the trotter from a mixed sale at the Meadowlands (see background articles). That would have at least allowed him to sell the horse back to the United States or send him there to race for another trainer.

That ST has displayed shocking hypocrisy and arrogance in the case shouldn’t surprise anyone that has ever dealt with a horse racing association or regulator, but that still doesn’t make ST’s decision to point the finger at anyone and anything but itself any easier to swallow.

Though, I will give ST credit on one part of its ruling to date. For the time being, it has chosen not to punish Redén directly by fining or suspending him. That doesn’t mean Redén is in the clear just yet. Another ST committee is expected to spend months reviewing the case to decide if the trainer deserves punishment. But, based on what was said by ST’s lawyer, Göran Wahlman, in a press conference Thursday, it appears ST at least realizes there was no malice on Redén’s part in the case and it will not press for him to be punished based on intent.

In a Google Translate version of a terrific article by Josefin Johansson published Thursday in major Swedish sports publication: SportExpressen (full story here), Wahlman was quoted as saying, “We will not demand intent. There are… different degrees in the penalty scale… (and) where it lands I cannot say. The only thing I can say is that we will not demand intent.”

That’s the good news in this shameful mess, which is not to suggest forcing Stall Zet owner Brixton Medical ABto return close to $3 million is going to be an easy transaction.

Redén is one of the sport’s rising star, not just a Swedish rising star. By all accounts, he is a clean and hands on operator that cares deeply for the horses in his care. We need more like him.

He doesn’t deserve to have his career ruined over this, especially when the judge, jury and executioner appears to have gotten off scot free from its crimes.

Still, it’s a safe bet the case will end up in the courts before it’s finally decided, and veteran Swedish harness racing journalist Claes Freidenvall wrote Thursday that ST’s ruling is hugely flawed by legal precedent in that country. We’ll see.

In the meantime, I hope everyone learns from this case and acts accordingly to avoid it happening in the future.

Horse buyers must be better versed in the rules of the jurisdiction where they plan to race and be exhaustive in the vetting process before making a purchase.

Associations/regulators need to put more stringent procedures in place to ensure all horses racing in their jurisdiction are abiding by its rules before any horse starts racing there. Punishment for failing to follow its own rules should be commensurate with the punishment it metes out to horsepeople that fail to follow the rules.

Record-keeping bodies such as the USTA need to improve rules on how quickly they update information in their databases.

Once records are updated more quickly, sales companies should be sure to disclose as much as they can about the horses they are selling.

Meanwhile, there’s no word on whether ST has undergone as exhaustive an internal investigation into how it botched its own procedures in this case as it devoted to pinning sole blame on Propulsion’s connections — with appropriate punishment meted out for those responsible — but I would be surprised if Svensk Travsport held itself accountable in any way.

Which is sad, really, because anything ST may have gained from its strict adherence to rules designed to protect the integrity of the game it has lost from failing to show the same level of integrity when it comes to its own behavior.