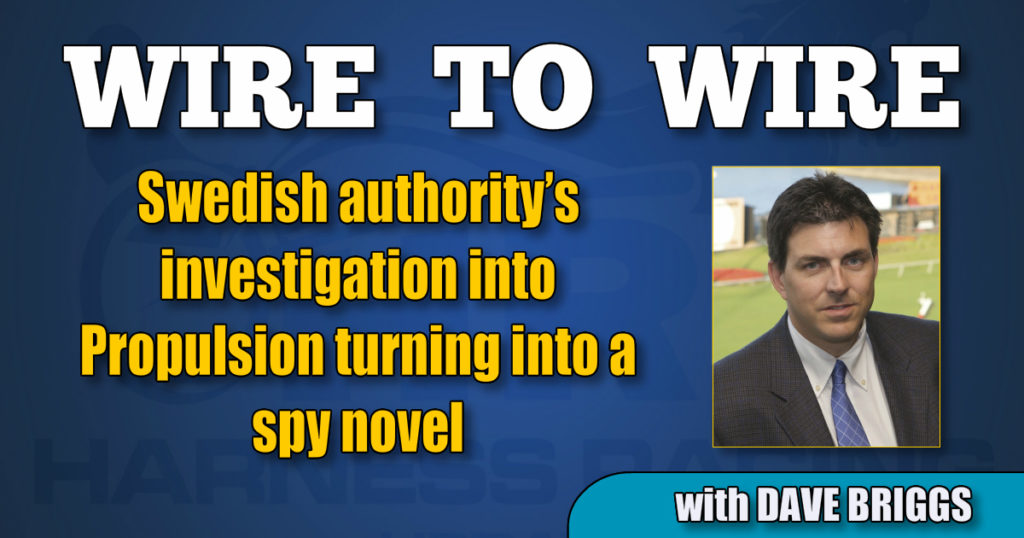 Swedish authority’s investigation into Propulsion turning into a spy novel

Top Swedish racing journalist Claes Freidenvall writes about being grilled by an investigator for Svensk Travsport (ST) about his role in the case of the Elitloppet winner.

The investigation into the Propulsion case by Sweden’s racing authority Svensk Travsport (ST) is apparently turning into more of a spy novel than a truth-finding mission, according to veteran Swedish journalist Claes Freidenvall.

Friday morning (Oct. 16), after Harness Racing Update (HRU) published its most recent edition, Swedish publication Sulkysport published a story written by Freidenvall saying he was interrogated by an investigator with a history of using digital techniques to try to catch criminals. The investigator revealed he had accessed Freidenvall’s search history on the USTA’s Pathway system. Freidenvall had not given his consent to do so.

The story, which was written in Swedish, was translated paragraph by paragraph into English using Google Translate by HRU, so it is not a perfect translation. However, what Freidenvall wrote is troubling in any language.

Before meeting with ST’s external investigator Roger Lindblom, Freidenvall requested questions be sent to him in advance. No questions were sent. Freidenvall, who has extensive experience with U.S racing, still decided to cooperate as a courtesy, but wrote that he was shocked by the meeting.

He wrote he was grilled as if he was the person being accused of performing the nerve procedure on Propulsion. He was also questioned as to why he had written articles critical of ST. Freidenvall was then showed a screenshot of his private, password-protected searches on the USTA Pathway system related to Propulsion.

According to Freidenvall, acquiring such information without consent goes against both the USTA Pathway system’s own privacy rules and the European Union’s long-standing General Data Protection Regulation (GDPR).

Performing what is alleged to have been an illegal search of Freidenvall’s search history is troubling, but so is the reason ST was interested in Freidenvall in the first place.

“Roger Lindblom wanted — according to his own statement — to find out if I had an ‘unhealthy relationship’ with (Propulsion’s trainer) Daniel Redén — what does this mean?” Freidenvall wrote (as translated by Google). “It was not Sulkysport that first revealed the news that Propulsion had been nerved. Norwegian Trotting and Gallop News did so after Propulsion’s victory in the Elitloppet.”

Freidenvall said Sulkysport did report — as did HRU — that Propulsion had undergone a nerve procedure at a veterinary clinic in the U.S. and that the USTA export certificate sent to ST clearly indicated that the nerve procedure had been done.

The brief synopsis is this: days after Propulsion won the Elitloppet in May, word began circulating out of Sweden that the U.S.-bred son of Muscle Hill—Danae might be stripped of that victory — or worse: ALL European victories — because he underwent a lower nerve procedure on both front legs in the United States while under U.S. ownership. Horses that undergo nerve procedures — regardless of how long ago that procedure was done — are not allowed to race by Sweden’s strict rules.

Redén purchased the horse at a mixed sale in the U.S. and told HRU that had he been aware of the nerve procedure, he never would have purchased the horse in the first place. U.S. rules at the time required the procedure to be disclosed to the racetrack where the horse was racing — and be posted there — which, by all accounts, it was. The procedure was not documented by the USTA until after Propulsion was sold to Redén, primarily because it needed to be documented on the export certificate. It is indisputable that the USTA clearly documented that the nerve procedure had been done on the export certificate that was sent to ST before the horse raced in Sweden (export certificate available here).

In my way of thinking, that means ST is at least culpable in failing to stop the horse from racing and abiding by its own rules. Propulsion has raced for six years in Sweden and earned some $3.6 million (U.S.). How did no one with ST check the documents for that many years? Even more questionable is how ST failed to check the export certificate after the procedure came to light again a year ago and ST sent two veterinarians to Redén’s farm in June of 2019 to examine the horse. Not only did the vets clear Propulsion to race, they did so almost a full year before the trotter won the Elitloppet.

Word that there may be problems with ST’s investigation into the case started this June when ST fired its lead investigator (2020-07-10 story). Steen Morten Johansen, the head of security and investigations for ST told Swedish media he believes his dismissal came because ST is trying to make him “a scapegoat” in the Propulsion investigation.

The investigation now is into its fourth month, but ST itself has yet to speak to Redén, the man at the center of the case.

Instead, apparently, ST is going after journalists to try to place the blame on anyone and anything but itself.

It’s all rings too much like a Swedish spy novel such as The Girl with the Dragon Tattoo than a serious attempt to arrive at the truth and adjudicate the case fairly.