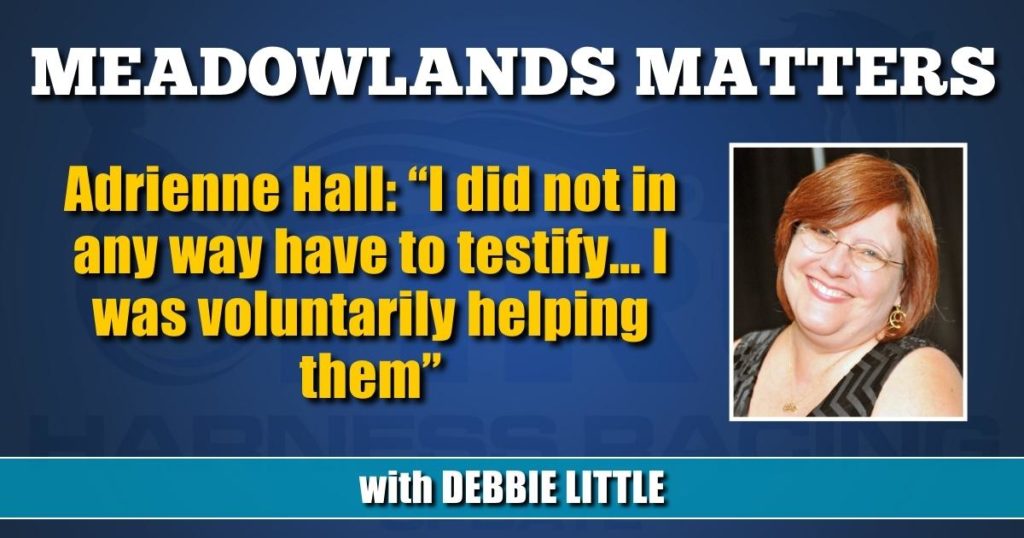 Adrienne Hall: “I did not in any way have to testify… I was voluntarily helping them”

Trainer at the centre of a controversy at The Meadowlands — after testifying against Dr. Seth Fishman and admitting to using performance enhancing drugs supplied by the vet — gives her side of the story

Early in the morning on Feb. 3, a press release was sent out by The Meadowlands stating that the Feb. 5 card would include two horses owned by Adrienne Hall.

Following that release, social media blew up like an atomic bomb.

Many were mystified by The Meadowlands’ president and chief executive officer Jeff Gural, a known proponent of ridding the sport of drugs, allowing Hall to race.

Hall, 42, had testified on Thursday, Jan. 27 (full story here), against Dr. Seth Fishman, a veterinarian convicted on two counts of drug adulteration and misbranding, with intent to defraud and mislead (full story here). In her testimony, Hall admitted to administering possible performance enhancing drugs (PED) to her two horses.

In his press release (full story here), Gural said in part, “We disagree with the USTA decision and we applaud Ms. Hall for coming forward.

“To penalize those who testify for the prosecution will only serve to further the already existing notion that “saying something will only lead to problems for yourself.” It will discourage the type of participation necessary to convict the indicted persons, as Ms. Hall’s testimony has helped on this case.”

Hall said she still clearly remembers the day she was contacted by the government about Fishman. She felt she had nothing to hide and, indeed, since they had wiretaps, there wasn’t anything she could hide.

“I did not in any way have to testify,” said Hall. “I was never subpoenaed. I was never forced or threatened. I was voluntarily helping them because I knew the stuff that was said on those tapes were very damaging to Fishman.

“He said things on our calls that he did not say to anyone else. I understood that and I wanted to help. They made it clear that they were doing this to clean up the business and it would make it better for the horses and I said yeah, I’ll help you guys.”

Even though her connection to Fishman ended when she moved to New Jersey from Florida in 2019, she spoke with him often in the previous five months because he was recommended to her as a highly respected, top-notch vet. And being new to the business, she was constantly looking to talk and learn.

“Anyone that knows me from back then, probably were so annoyed by me, because I would ask so many questions of everyone, blacksmiths, other trainers,” said Hall. “Coming into this, I was always on the business side of it and I was just learning as I went and it was stupid to do it that way. But I asked so many questions and only wanted to talk about my horses and just wanted to learn everything as fast as I could. So yes, I really respected his opinion.”

Hall had two horses at the time and often sent Fishman their bloodwork and was interested if there was anything she should be doing to make them more competitive.

“I really appreciated being able to turn to someone as knowledgeable as him,” said Hall. “I thought he was brilliant. I thought he was so smart. I would send him my bloodwork. I would go over the problems I was having and we did a lot of talking about the horses.

“He never actually saw them, though, which is a big problem I guess because vets aren’t supposed to be diagnosing and giving medication without being there and physically examining the horse first.”

Fishman gave her some free samples that weren’t properly labeled and some that were just color coded and told her that it would help her horses but not hurt them.

“The whole thing made me uncomfortable,” said Hall. “I didn’t think it was dangerous. I knew it was against the rules. I wasn’t supposed to be administering anything like that to my horses and I broke the rules.”

She used some of the samples for about a month but didn’t use them all and as she stated in her testimony never paid for any of Seth Fishman’s products.

Hall is under the impression that those products were sent for testing and nothing conclusive was found.

During that time one of her horses did win at Pompano Park, but he had dropped to the bottom class and was the 7-5 second choice, so there’s no way to determine if whatever she gave the horse had any effect.

Hall’s last conversation with Fishman was shortly after she arrived in New Jersey. He told her that he regretted ever trying to help her because she had been a huge waste of time, leading Hall to believe that Fishman may have been using her to get to more high-profile people she knew, like thoroughbred trainer Todd Pletcher, whom she had done administrative work for.

Following the trial, a list of Fishman’s clients was posted on the web. The list, however, does not show who bought what, so of the 2,000 clients, the majority could have purchased the horse equivalent of aspirin.

“We now have access to Seth Fishman’s customer database files, which contain the names of hundreds of his clients, including several prominent trainers who hopefully can produce records showing what they purchased and why,” said Gural.

The New Jersey Racing Commission (NJRC) is currently doing an investigation into Hall, so it’s unclear how much longer she will be able to continue to race in New Jersey, but she is prepared for whatever judgement that is handed down by the NJRC.

“I made a huge mistake by doing that and I own it and I’m trying to get it right now,” said Hall.

Hall is currently trying to stay off social media because some of the comments have been beyond hurtful, especially from a couple of people that she thought were her friends.

Some have posted that since she admitted to cheating to gain an advantage she should not be allowed to race, while others appreciate her stepping forward as opposed to the hundreds that remained silent. Another said if she is tossed after she came forward, it will just enhance the secrecy.

Hall has also been accused of being a rat on social media, which is far from the truth. Fishman offered up the information on the wiretaps, and, in essence, ratted on himself.

In some of their conversations, Fishman talked to Hall about some of his high-profile clients and what some of them allegedly purchased. So, it was surprising to Hall that at least one of those clients bashed her on Facebook.

“This whole thing has been absolutely brutal on me, when in reality, I’m trying to help make it better,” she said. “These guys can say whatever they want about me, I don’t care. I had more balls than any of them to do what I did.”