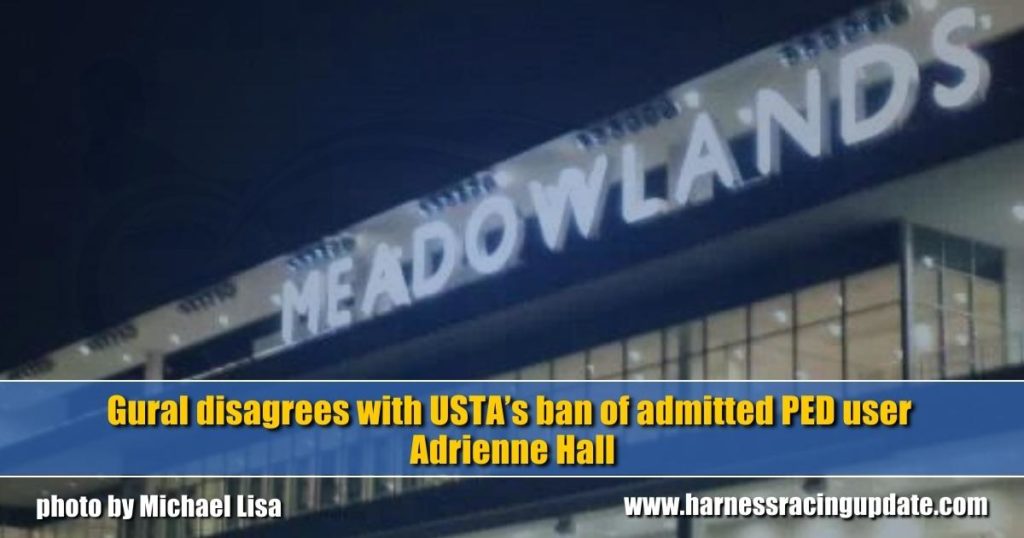 On Wednesday, Dr. Fishman was found guilty of two counts of conspiring to violate adulteration and misbranding laws and the manufacture of PEDS that were administered to racehorses by corrupt trainers for money and fame.

Ms. Hall was notified on Tuesday that her USTA membership had been revoked per Article 1, §4 of the Association bylaws. USTA membership is not required to be granted a pari-mutuel racing license in New Jersey, thus she remains eligible to race per the New Jersey Racing Commission.

Ms. Hall’s horses will not be scratched by The Meadowlands.

Meadowlands president Jeff Gural made the following statement on the issue:

“We disagree with the USTA decision and we applaud Ms. Hall for coming forward.

“To penalize those who testify for the prosecution will only serve to further the already existing notion that ‘saying something will only lead to problems for yourself.’ It will discourage the type of participation necessary to convict the indicted persons, as Ms. Hall’s testimony has helped on this case.

“The lack of action by the USTA during this five-year effort on our part to get rid of the cheats along with their continued opposition to the HISA (Horseracing Integrity and Safety Authority) legislation which, with some changes, is our only hope of keeping the chemists out is dangerous to harness racing. We have received no support from USTA or any of their members in trying to eradicate the drugs and those who use them from racing.

“The absence of coverage on ustrotting.com of the Fishman trial proceedings is inexcusable.

“We now have access to Seth Fishman’s customer database files, which contain the names of hundreds of his clients, including several prominent trainers who hopefully can produce records showing what they purchased and why.”

Editor’s note: HRU reached out to the USTA for comment. Dan Leary, the USTA’s director of marketing and communications sent the following response:

Adrienne Hall testified under oath to obtaining an impermissible, performance-enhancing drug that was administered to a horse in her care that competed in and won a pari-mutuel event. This is a clear violation of USTA rules.

Ms. Hall has the right to appeal her suspension to the Association.