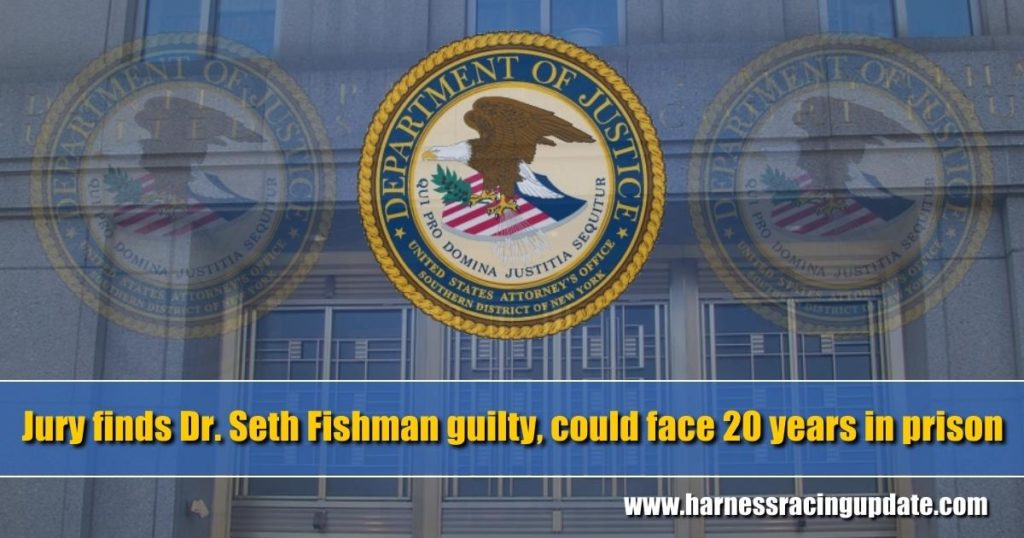 Florida veterinarian Dr. Seth Fishman, the first person to face trial in a sweeping horse-doping case that documented the widespread use of illegal and undetectable performance-enhancing drugs (PEDs) at tracks across the country, was convicted in New York on Wednesday (Feb. 2) on charges that could put him behind bars for 20 years.

A jury of eight women and four men in U.S. District Court in Manhattan found Fishman, 50, guilty of two counts of conspiring to violate adulteration and misbranding laws and the manufacture of PEDs administered to racehorses by corrupt trainers for money and fame.

The verdict came swiftly. Jurors got the case late Tuesday (Feb. 1) and deliberated for about three hours Tuesday and Wednesday. The trial began with jury selection Jan. 19 and lasted 11 days.

The jury rejected Fishman’s defense that his actions were in keeping with his oath as a licensed veterinarian to protect the health and welfare of animals.

“I understand the jury has reached a verdict,” Vyskocil said after the jury filed in the wood-paneled courtroom on the 26th floor of the courthouse.

The jury’s foreperson then announced Fishman’s guilt on each of the counts.

“I love animals. I love horses,” one of the jurors, Victoria Lopez, a 61-year-old woman from The Bronx, said in an interview following the verdict. “What they were doing wasn’t right.”

“The jury’s swift conviction of Seth Fishman reflects the overwhelming evidence of his guilt as displayed through this trial,” New York U.S. Attorney Damian Williams said in a release issued from his office. “As an ostensible veterinarian — sworn to the care and protection of animals — Fishman cynically violated his oath in service of corrupt trainers and in the pursuit of profits.”

Williams added, “Through the sale of untested, unsafe, and unstable drugs, Fishman’s illegal drug business was a platform for both fraud and animal abuse. Today’s conviction appropriately condemns the danger inherent in Fishman’s crimes and underscores the seriousness with which this office takes the kind of abuse that Fishman practiced.”

“I am pleased to see all of the effort and time spent by federal agents, prosecutors, and others who have worked so hard on this case be rewarded with a guilty verdict, and I thank them for their commitment,” Janney said in a statement distributed by TJC.

“It is highly encouraging to know that those who cheat and endanger our sport’s athletes, both equine and human, face meaningful and life-changing punishments. Clearly, this verdict will serve as a deterrent to others, and it also provides hope for those who want to see true change in the racing industry. This step forward, one of many recently, reflects our steadfast determination towards maintaining the highest levels of integrity and safety for racing’s athletes and customers.”

Fishman wasn’t in the courtroom when the verdict was announced. Vyskocil hasn’t said in open court where he is. A cryptic comment from Fishman’s attorney to the judge led to speculation Fishman may be in a hospital.

Fishman had a co-defendant Lisa Giannelli, at the start of the trial. She worked with Fishman for 18 years, and prosecutors accused her of being Fishman’s drug distributor. On Jan. 24, Vyskocil declared a mistrial in her case after her attorney tested positive for COVID-19.

The investigation began in 2018 and was headed by the Federal Bureau of Investigation and criminal investigators with the Food and Drug Administration.

At the time of the indictment, then-New York U.S. Attorney Geoffrey Berman said the case was “the most far-reaching prosecution of racehorse doping in the history of the U.S. Department of Justice.”

“What happened to these horses amounted to nothing less than abuse,” Sweeney said.

Those charged included top trainer Jason Servis, who federal prosecutors say juiced multi-millionaire Maximum Security, the first-place finisher in the 2019 Kentucky Derby Presented by Woodford Reserve (Grade 1), who was demoted to 17th by stewards for interference with another horse in the race.

The accused also included Jorge Navarro, who was sentenced to five years in prison last year after pleading guilty to conspiracy. Prosecutors presented evidence at Fishman’s trial showing that the trainer paid Fishman tens of thousands of dollars for PEDs, including a substance called BB3 that prosecutors say thickens a horse’s blood to make it run faster and farther.

Navarro is one of nine charged individuals who have pled guilty. Two others who were arrested entered into non-prosecution agreements with prosecutors.

The Fishman trial revealed that another of those accused, former harness trainer Ross Cohen, struck a deal with prosecutors to become a cooperating witness.

Servis and several others have pled not guilty and are awaiting trial.

Prosecutors have said in court papers that they are in plea discussions with several defendants without naming them.

The Fishman verdict could have an impact on cases going forward.

The evidence against Fishman included witness testimony, emails and texts, and wiretap recordings that captured Fishman talking about doping horses, and bragging that his drugs wouldn’t appear in post-race testing.

Two of those witnesses were harness trainer Adrienne Hall and thoroughbred trainer Jamen Davidovich. They testified they juiced their horses with PEDs obtained from Fishman. Hall testified under deferred prosecution agreement with the government. Davidovich’s testimony came after he was granted immunity.

As part of their case, prosecutors also played for the jury video of Navarro’s juiced X Y Jet winning the $2.5 million Dubai Golden Shaheen Sponsored By Gulf News (Gr. 1(G1) in Dubai in 2019. X Y Jet died of a heart attack a year later, Navarro said in a statement shortly after the incident.

“Thank you, boss, (you’re) a big part of it,” Navarro said in a text exchange with Fishman just after the 2019 Golden Shaheen.

The jury of eight women and four men deliberated for about 30 minutes before retiring for the night without reaching a verdict. They resume deliberations the morning of Feb. 2.

The charges against Fishman, a 50-year-old Florida veterinarian, stem from a federal government crackdown on horse doping at tracks across the country in which more than two dozen individuals were indicted. Those charged include top trainer Jason Servis, who is awaiting trial, and Jorge Navarro, who was sentenced to five years in the case after pleading guilty.

Prosecutors say racehorse trainers at thoroughbred and harness tracks juiced their horses with performance-enhancing drugs manufactured by Fishman and designed to elude post-race testing. They say Navarro was one of Fishman’s clients.

At the start of the trial’s 10th day Tuesday, jurors noted Fishman’s absence in the courtroom for a second straight day. They weren’t told where he was, and Judge Mary Kay Vyskocil advised them not to speculate on his absence.

“Please don’t draw any inference as to why he may be absent,” she said.

The panel spent most of the day listening to prosecutors and defense attorney Maurice Sercarz clash over the evidence in the case in closing arguments.

Prosecutor Sarah Mortazavi addressed the jury first and began by saying that Fishman built “a multi-million drug business through deceit.”

“You know what the defendant Seth Fishman is all about,” she said. “His business was to peddle adulterated and misbranded drugs, performance-enhancing drugs designed by him to cheat horse racing.”

Re-emphasizing evidence submitted during the trial, she paused to play a 2019 Federal Bureau of Investigation wiretap. In that recording, Fishman says that anytime you give something to a horse you are not supposed to, that’s doping.

Mortazavi said another wiretap quoted Fishman as saying he was cheating the system.

“If someone says they are trying to cheat the system, that’s what they are doing,” the prosecutor said.

A few minutes later, Mortazavi held a drug vial that had been seized from Fishman’s business in 2018 and showed it to the jury.

“We’re not talking about hay, oats, and apples,” she said.

Mortazavi said there was overwhelming evidence of Fishman’s guilt. The prosecution’s case included witness testimony, emails, text messages, and dozens of wiretap recordings. Three of the witnesses were trainers who said Fishman supplied them with PEDs.

To prove its case, the prosecution must prove that Fishman defrauded or misled others over the course of the alleged conspiracy.

Mortazavi said the evidence showed Fishman tried to defraud and mislead the Food and Drug Administration by registering his corporation in Panama.

She said the evidence also shows how Fishman tried to avoid scrutiny by racing regulators.

She reviewed a text quoting Fishman saying “absolutely not” when asked if an order of PEDs should be sent to an address at a track.

“Why not send it to the racing office,” Fishman wrote, apparently in jest.

“LOL,” was the response from Fishman’s business associate Lisa Gianelli.

She was being tried with Fishman, but a mistrial was declared in her case last week after her attorney tested positive for COVID-19.

Sercarz argued to the jury that there was insufficient proof from the government that his client defrauded or misled.

“Did he do something to violate racing regulations? Yes, but intent to defraud or mislead?” Sercarz said.

He contended Fishman’s actions were those of someone acting in good faith and who, as a licensed vet, had the horses’ best interests in mind.

“Seth Fishman improvidently chose to live in a rough neighborhood among racehorse owners and trainers bent on cheating,” Sercarz said.

“I submit it was Dr. Fishman who was trying to wean horses off much more dangerous stuff and provide a safer alternative while adhering to his oath as a licensed vet to protect the welfare and safety of animals.”

After Sercarz finished, prosecutors had the final say. Prosecutor Andrew Adams stood up and asked the jury to reject his adversary’s argument.

“He doesn’t have much to work with,” Adams said. “He’s not a magician. He can’t make the evidence disappear.”

The prosecutor told the jury that Fishman’s actions weren’t about helping racehorses but about helping his clients make money and cheat race regulators.

“He was a drug dealer, not a veterinarian,” Adams said.

The panel spent most of the day listening to prosecutors and defense attorney Maurice Sercarz clash over the evidence in the case.

by the USTA communications department

Cohen and Hall have been key figures in the federal horse doping trial of Dr. Seth Fishman in New York, with both testifying to having received illicit performance enhancing drugs from Dr. Fishman, then having them administered to horses in their care. Additionally, Cohen claimed to have paid drivers to fix races.

Cohen is a former trainer who has not been active since 2009, while Hall most recently started a horse in late 2021, at the Meadowlands on Dec. 18. Both testified last week under plea arrangements as government witnesses in the trial of Dr. Fishman, a veterinarian accused of adulteration and misbranding conspiracy charges.

The USTA revocations are per Article 1, §4 of the Association bylaws, which states that “membership may be revoked for any member whose experience, character, or general fitness are such that the participation of such person in harness racing will not be consistent with the best interest of the sport and whose membership would be detrimental, reflect adversely or unfavorably on harness racing or upon the association and who has either admitted to race fixing in a sworn statement or been found guilty of race fixing in final adjudication, shall be barred from membership in this association for life.”

Under Article VIII of the USTA bylaws, Cohen and Hall have the right to appeal their penalties.