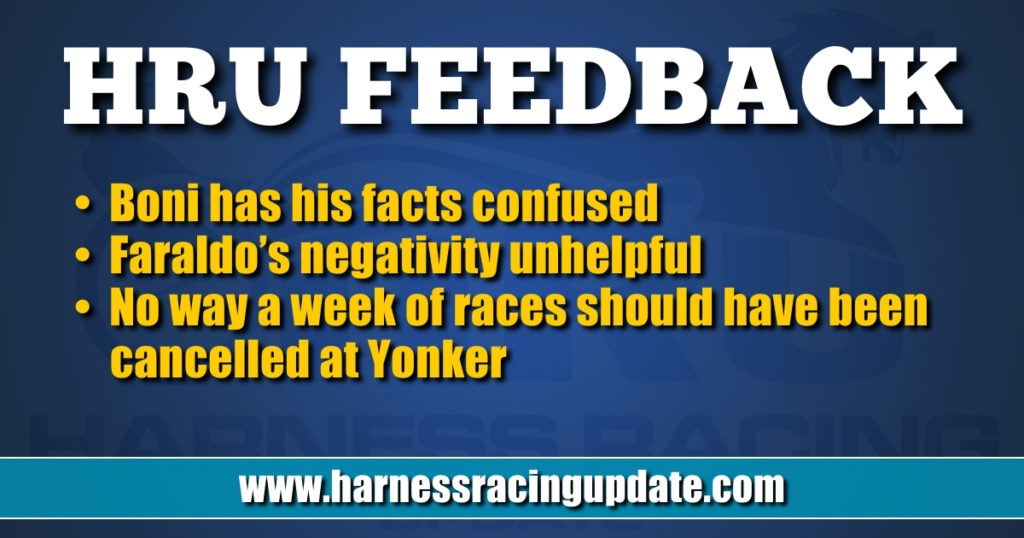 Boni has his facts confused

Bob Boni responded to Ray Schnittker’s mention of Deweycheatumnhowe not being on the Hall of Fame (HOF) ballot in 2014 (full story here). He said Ray was “entitled to his opinion but not entitled to his own facts.”

Unfortunately, Bob is the one that has the facts confused. I am a HOF trustee, and was at the meeting in 2014 when the five nominees were announced, and Dewey was not on the original list. That is what Ray was referencing in his last column (full story here).

Subsequently, it was discovered that one of the five nominees for the Living Horse HOF was no longer living, so that horse was removed, and Dewey was put on the list as a replacement.

When the revised list was sent out to the voters, the voters selected the two obvious choices: Somebeachsomewhere and Dewey.

The HOF voters got it right, but the HOF nominating committee had not.

Everyone tends to like “home cooking,” so there will always be people upset with who gets nominated and who does not. I have been complaining for years about the lack of fillies on the ballot. Peaceful Way is just being inducted this year and she is now 20 years old. Look at her credentials, and you will see how egregious that is. Thankfully, the committee has recently changed the rules to make certain that at least one filly is on the ballot each year.

Social media is keeping Bob busy fielding questions regarding the horses nominated and the process, which might not be pleasant for Bob, but I think the more transparency, the better.

The horses should be enshrined on their achievements, not who owns them, and hopefully the committee is doing their best to achieve that.

MGM is in the business of making money for shareholders through slots and table games, not as a core business maintaining track surfaces or shifting money to purse accounts. Schools need teachers to teach. A casino doesn’t need horse racing to sustain its core business (unless Yonkers’ license is tied to its casino license). Even so, what motivation is there to sustain racing, invest in it and the horsemen, when someone like Joe Faraldo rages negatively, seemingly at every turn, and for every reason (full story here).

I believe Aqueduct lost at least one race day during this recent storm, and in years past the Meadowlands would cancel cards at the hint of any snowstorm. A rational negotiator could have lobbied for replacement race days. But, alas, we’re working with Faraldo, who is right in one sense. MGM is the monster with bank (cash), owns the track and its future. The purse structure over the years has been a gift to horsemen especially when the stands are all but empty and, despite the inflated purses, the racing product is underwhelming. In fact, it’s painful to watch if you’re an artisan of harness racing. So, how much longer will this conglomerate monster tangle with this complaining monster; one who is boisterous, ungrateful and antagonistic? The little monster might be around to wreak havoc on state racing for a while to come. The other monster, larger and holding all the cards and the bank, may soon have had enough and go by the wayside, peacefully without worries of track maintenance, snow removal, or funding purse accounts for what we all likely agree is lackluster, half-mile racing. And in large part, in my opinion, we’ll have Joe Faraldo to thank.

What is happening at Yonkers this past week is pathetic! I call it “Half Assness!” It is something that has seeped into the fabric of our country. In this instance, it’s corporate half-assness. There is NO WAY there should be a whole week of cancelled race cards at a MAJOR North American racetrack because of lack of action and responsibility by management!

Here in Chicago in the 1990’s, Hawthorne used to have a winter meet in Jan & Feb… the heart of a Midwest winter. We used to have blizzards and snowstorms and track maintenance used to be out there ALL NIGHT to clear the racing surface of snow. The next day, that track was in tip-top shape! They had $2 million dollar handles on the weekends! The Carey family, who own Hawthorne, aren’t gonna take that loss.

You would think that the corporate owners at Yonkers would do all they could to keep their business open…like the Carey family did and have personnel out there going round and round all night in the snow to clear the track. It’s only a half-mile…(Hawthorne is a full mile!). I know they have COVID restrictions, but the good condition of the racing surface should be paramount. The director of racing should know better… He is the one person who should f – – – ing know better! Maybe MGM really doesn’t want to be in the harness racing business. They just want casino money.

Is there a wealthy person or gaming corporation out there who REALLY likes harness racing and can build a 7/8ths or mile track racino in the NYC area so Yonkers/MGM can achieve their bottom line with only slots? When it comes to horse racing… MGM is HALF-ASSED!

Are Yonkers’ judges up to the task of protecting the public’s interests?

You’d think that Yonkers’ judges having knowledge of the previous relationship between the team of Pena and Herrera at Cal-Expo racetrack and earlier Yonkers issues with Lou Pena, would be up to the task of protecting the public’s interest in the area of racing integrity. So in the words of Desi Arnaz “You Got Some splaining to do Lucy” about the first two races at Yonkers last night (2/5/21). The first race in particular is eerily familiar to May 22, 2010 where Lou Pena took a lower level claimer and beat the New Zealand superstar Auckland Reactor in a time an hour faster than he’d ever run before. Drugs you say? Naw, Lou would never of done that. Culpability? In the case of Yonkers, you think the post-race blood analysis results will be published and with suspicion in the air before the race because of the previous connections, did the judges have pre-race testing ordered, so if the answers are no, are you really being served by those charged with and being paid to oversee integrity?

While we’re at it, let’s talk about the amount of longshots at many tracks now. I keep expecting more FBI indictments in as much as the amount of longshots has more than tripled lately, but nothing? The tracks in action has exacerbated the amount of longshots so they need to look no further than themselves to pin the blame on. News Flash: harness racing you have picked the worst possible time to be AWOL in as much as sports betting has now pushed into your previously unchallenged domain. With this option we’re not trying to beat nine other drivers, trainers, owners and unchecked judging — just the spread.

The morale of the story is keep your head buried in the sand and soon you will be the only one on the beach.