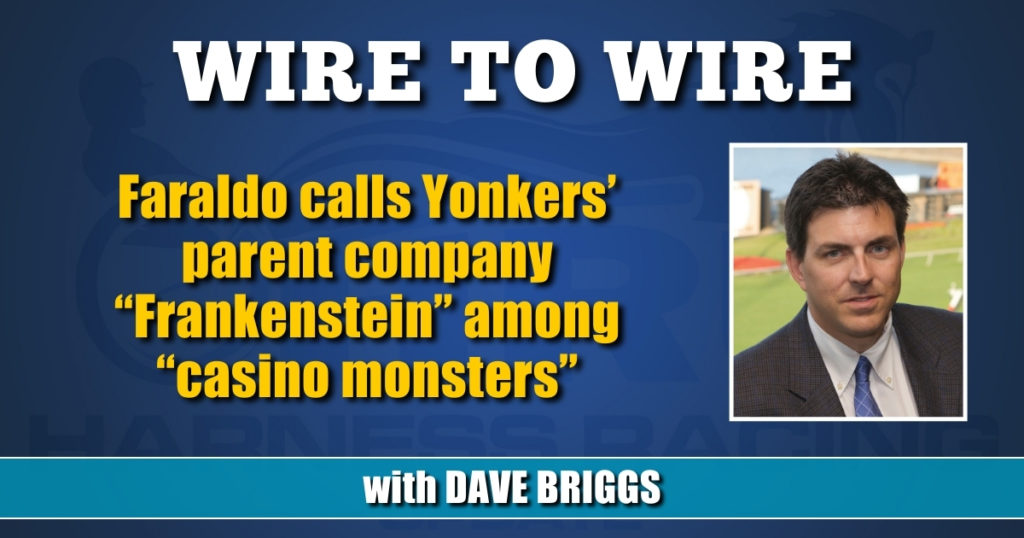 After four straight cancelled cards due to the inability to clear the snow after a major storm, the president of the Standardbred Owners Association of New York is fired up about a litany of problems at Yonkers that he blames on MGM Resorts. The track’s director of racing Alex Dadoyan said he takes “great issue” with Faraldo’s assessment, “because it’s not true.”

Joe Faraldo sounded frustrated when reached Thursday (Feb. 4) to talk about why Yonkers Raceway has cancelled four cards of racing this week due to the inability to remove the snow from the track after a massive storm concluded late Monday (Feb. 1) in New York City.

“Of all the casino monsters that are involved in racing, MGM Resorts is the Frankenstein of them all,” the president of the Standardbred Owners Association (SOA) of New York said while lodging a litany of complaints against Yonkers’ parent company.

“In the past, under the management of Tim Rooney, at four or five o’clock in the morning, when it was predicted the snow would stop, you’d get a crew out there moving the snow off the track immediately on Tuesday morning. Nothing was done on Tuesday morning,” Faraldo said.

Footage Faraldo took at the track and posted on social media backs this up.

“So, now, you have a condition where the racetrack gets covered with snow and nobody moves it. There’s no access from the barn area up the ramp to the track to exercise horses. You put horses in jeopardy because you’re either incompetent or you are just looking to save a buck. When you get a racing license, your obligation is more than just your bottom line. You have certain obligations and certain things where you can’t cut cost and track maintenance is one. We’ve had an ongoing dispute with these people about what they are doing, or failing to do, about track maintenance.

“Meanwhile, it’s inhumane to have those horses locked for three days down in the barn area and they can’t get out – they atrophy, they tie up… these are not horsepeople that are making these decisions and, if they are, they know better, which is just all wrong to operate a racetrack.

“This lays directly at the door of management and their whole racing operation. There is absolutely no concern about track maintenance, number one. I’ve been telling the Gaming Commission about this for some time.”

A statement issued by Yonkers Thursday (Feb. 4) announcing the cancellation of that night’s card, said the challenge re-opening the track came, “as a result of icy track conditions that remain after clearing the track of snow. Like other tracks and businesses facing similar circumstances, the combination of a devastating amount of snow, as well as the COVID-19 state-mandated quarantine requirements that have impacted our union workforce, have delayed the recovery of the track surface. We will always choose safety first and will resume live racing when we can ensure that track conditions do not endanger our human and equine athletes. The goal remains to race as soon as safely possible.”

Word was unavailable at press time as to whether tonight’s (Feb. 5) card will go ahead as scheduled.

Faraldo’s contention that MGM is simply trying to save money by not meeting the obligations of its racing license in a variety of areas that includes, but is not limited to: the elimination of food in the paddock and grandstand; poor maintenance of the paddock that has a leaking roof and sometimes lacks heat; not enough staff to conduct racing properly; poor track maintenance and his assertion that Yonkers is moving toward closing its barns and dormitory.

Alex Dadoyan, Yonkers’ director of racing, said he wasn’t authorized to speak publicly about most of Faraldo’s direct complaints, but he did admit to being frustrated that most of what Faraldo has said about Yonkers isn’t accurate.

“I take great issue with it because it’s not true and he’s just trying to put forward a narrative to serve him,” Dadoyan said. “(Faraldo) likes to paint MGM as a big monster, but knowing Joe, that’s always his M.O. – the big, evil track is out to squash the tiny horsemen… And not just MGM. He uses that argument for everything.

“There’s been countless things done to show MGM’s dedication (to racing) since they took over the property and (Faraldo) chooses to ignore everything and focus on things that he wants to focus on.”

The fact Faraldo and Dadoyan worked together for the better part of seven years — Dadoyan left his job as executive director of the SOA of New York in September of 2019 to take the director of racing job at Yonkers — makes the impasse somewhat personal.

“I’m not working this out with (Dadoyan) because there are certain things that I’m not being made privy to and I’m told later, ‘this is what we did’ unilaterally,” Faraldo said. “I don’t really appreciate that.

“I think Alex is directed by Ed Domingo (the senior vice-president and chief financial officer for Empire City Casino and Yonkers Raceway)… I think Alex is trying to appease this employer, which I understand, but in my opinion he’s going above and beyond what is necessary to accomplish the goals of his employer at the expense of the horsemen. That’s something that I’ve got in my head and I’m convinced of it and no one is going to change my mind at this point.

“They do not want to spend five cents more on racing. They save money every day we don’t have racing.”

Dadoyan stressed he didn’t want to make the disagreement with Faraldo, “personal, because it’s really not. What bothers me is that we had a chance to work together and do some good things for racing and instead… it hasn’t been that. That’s the part that’s really frustrating. Part of the reason I took the job was that I thought we could do some good together to make overall racing better.”

As for the specific issue of a return to racing, Dadoyan said Yonkers’ actions in the matter should count for something.

“We’ve had guys on the track around the clock, day and night the last couple of days, in order to be able to race and race safely,” Dadoyan said Thursday. “If it was the narrative that Joe was talking about, why would we do that?”

Faraldo said the issue is a broader one about a track not living up to the terms of its racing license.

“If I was the state of New York, I wouldn’t give these guys the license to operate a casino,” Faraldo said, adding the current racing contract with Yonkers ends May 31 this year.

“We’ve been in contract negotiations, but it seems like they keep delaying every time we need a third meeting or a second meeting. We do it remotely, so it’s not a question of getting people into a room… I think it’s a conscious effort to not even address some of these problems. They don’t want to cure these problems.”