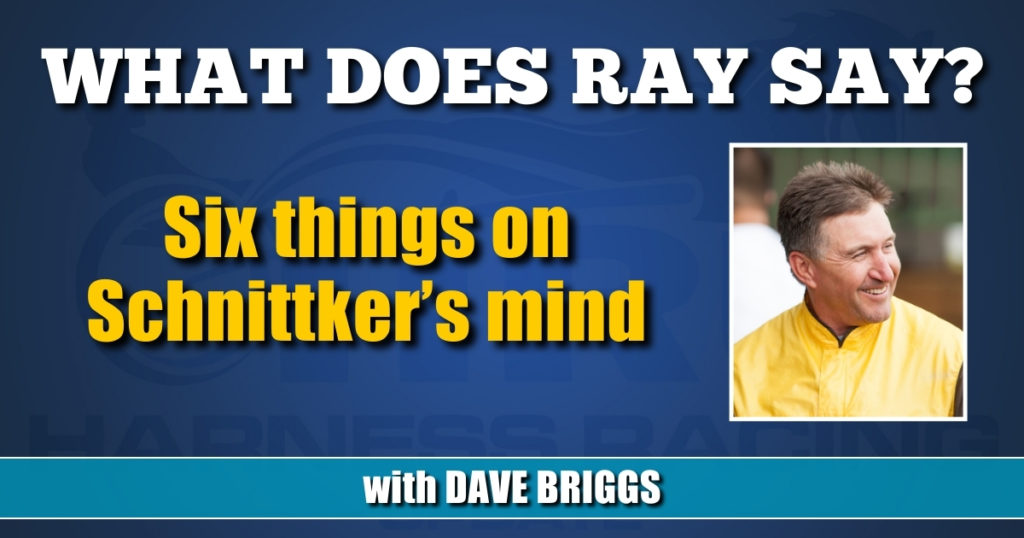 As usual, horseman Ray Schnittker has a lot to say.

It’s been awhile since we checked in with our multi-talented horseman and common-sense sage Ray Schnittker, so he grabbed his notes and fired off six things currently ticking him off.

Schnittker said those that oppose the new, more restrictive, whipping rules in New Jersey — ones that are similar to whipping rules long in place in Ontario — keep making the argument that the new rules will kill betting.

“The biggest argument I hear about (more restrictive) whipping (rules) is the gamblers won’t want to bet,” Schnittker said. “Well, they bet more at Mohawk and Meadowlands than anywhere else. So, I think that kind of shoots down that argument.

“I remember (driver) Mark MacDonald told me one time, and I think he was right, he said, ‘(Restricting whipping) makes younger drivers better drivers earlier.’ They come out of Canada and you can’t just beat the s – – – out of them, and I think it does make a difference. They’ve got live hands and the horses go for them.”

Lest anyone peg Schnittker for an anti-whip guy, he insists whips are a necessary safety tool in case something goes wrong on the track.

“You need a whip, believe me, in case you’ve got one that starts backing up or wants to take you right into the infield or a flagpole or some damn thing.”

Top thoroughbred trainer Mark Casse believes Clenbuterol is the most abused drug in the industry and has called for a total ban (full story here).

Clenbuterol is already prohibited in both breeds in Canada within 28 days of a horse starting, a move that caused some opposition when it was implemented in the spring of 2020 (full story here). But Schnittker said he agrees with Casse that the drug should be banned outright in North America rather than simply have its withdrawal times altered as suggested by USTA chairman Joe Faraldo (see item on pg. 23).

“Some people are so worried about the Clenbuterol and I think Mark (Casse) was 100 per cent right,” Schnittker said. “He said, ‘All anybody ever does is abuse it, so f – – – it.’ Basically, that was his line.”

Schnittker, a long-time United States Trotting Association (USTA) director said he’s had a change of heart about whether the USTA has too many directors. In the past, he and others have decried the fact the association has more than 60 directors.

Schnittker said the danger in cutting the number of members is the likelihood it would lead to too much influence on the board from racetracks.

“The older I get, the more I think about stuff,” he said. “If they ever cut directors they aren’t cutting anybody from the racetracks, they are going to cut horsemen. They will have even less representation… I’ll at least represent the horsemen.

“It probably should be a smaller bunch of people, but I don’t want to cut 12 horsemen off this and then the tracks have their guys that know how to run a racetrack, but don’t really know enough about the horse business… Especially, with the casinos going into the tracks.”

Schnittker said the USTA should use the 5 Stones Intelligence agency to lead its investigations into integrity matters. 5 Stones was the group Meadowlands Racetrack owner Jeff Gural hired that was instrumental in the federal indictment of some 30 people connected to either the harness or thoroughbred industry — or both.

“I called up (USTA president) Russell Williams and I said, ‘Why don’t we just use the 5 Stones guys to do this investigating? His line was, ‘We’ve got it up for bids and there’s two other (groups).’ To me, it just seems like a waste of money and it seems like someone in the USTA doesn’t want to have (5 Stones). They’ve already got it figured out, they know how to do it, they’ve already had results… Just because they are Jeff Gural’s guys doesn’t mean that they are bad guys.

“I thought (5 Stones) did a great job, so why are we trying not to use them?… If I gave a guy a horse and he won the Hambletonian three times in a row, I’m not going to give the horse to somebody else to train. They are getting the job done, so let’s use them.

Schnittker said Williams told him a group of potential investigators were judges.

“I thought he meant harness racing judges, not court judges and I said, ‘Russell, those guys couldn’t see a fixed race if it hit them in the head.’ He said, ‘Oh no, not those kind of judges.’”

5. Horses that are a “lock” to be on the Hall of Fame ballot.

Schnittker said he takes issue with Bob Boni’s assertion that, “I don’t think anyone will have to worry about Tall Dark Stranger making the (Hall of Fame) ballot” (full story here).

The reason Schnittker said he is skeptical has nothing to do with Tall Dark Stranger’s stats, but more to do with the trainer’s personal experience. He said his exceptional trotter Deweycheatumnhowe, “probably had just as good a record as (Tall Dark Stranger) has and he wasn’t even nominated the first year. (Deweycheatumnhowe) won 23 out of 26 and was the highest money-earner of all time at 2 and 3.”

Deweycheatumnhowe was inducted into the Living Horse Hall of Fame in 2015, seven years after he retired from racing.

“So, when they say Tall Dark Stranger is a lock, not necessarily. This is a perfect example. I couldn’t believe (Deweycheatumnhowe) wasn’t nominated the first year.”

“I’m so tired of hearing about Billy Haughton and Stanley Dancer. It’s, like, Jesus Christ, they’ve been dead for 35 years and 20 years, probably, and people keep bringing them up,” Schnittker said.

For the record, Haughton died in 1986. Dancer died in 2005. So, Schnittker gets points for being darn close, off the top of his head, on how long ago each of them passed.