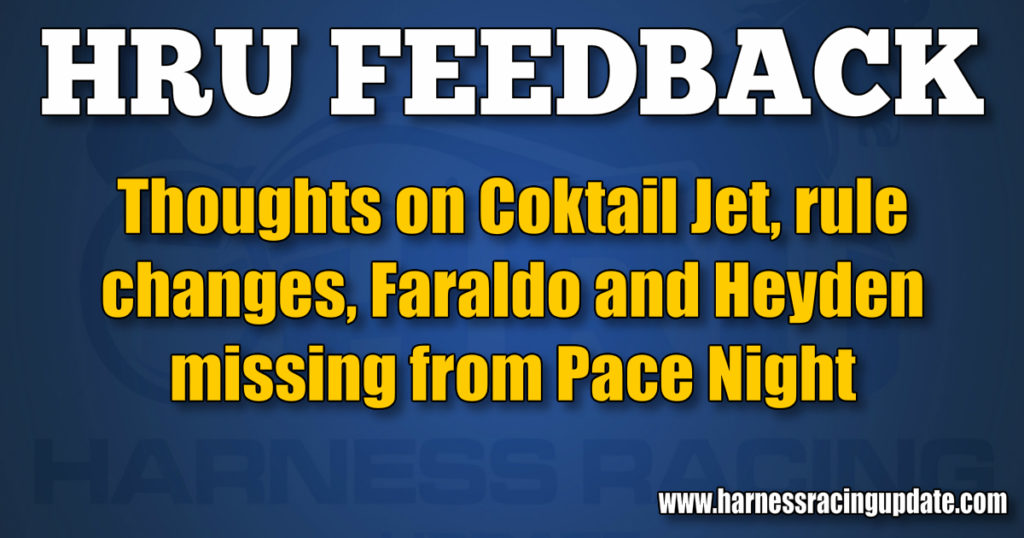 Pace Night was great, but where was Heyden?

I agree with every superlative, adjective and description of Meadowlands Pace night provided by Dave Briggs (full story here).

As a harness racing fan for nearly 40 years – Meadowlands Pace night was one of the greatest races and most exciting evenings our sport has ever produced.

And I thoroughly enjoyed Dave Brower’s and Dave Little’s coverage throughout the night as well. However – there was a very noticeable absence on this special night – Bob “Hollywood” Heyden. His incredible storytelling, historical perspective, photographic memory and deep appreciation of our sport should have been on full display on this ultra-special evening.

Hollywood Heyden is the most unique voice our sport has to offer. It almost seems improbable – but he has been underappreciated for decades, and now that he’s not a regular voice in Meadowlands harness racing – he’s missed even more.

Hollywood should be utilized every chance we get – ESPECIALLY – on the biggest nights our sport has to offer.

Our sport – like every other – has been decimated by COVID-19, but we’ve been in steady decline for many, many years long before the pandemic reared its ugly head. We’ve lost a huge percentage of our fans to slot machine mania and many more to cell phones, home computers and social media addiction. Anything – or anyone – who can add luster to our sport needs to be not only utilized – but put in the spotlight. And indeed – Hollywood Heyden is special to our sport in every sense of the word.

Maybe there is a reason Hollywood isn’t used much anymore; if so racing fans would like to know. Maybe I totally missed news coverage of his absence. Regardless, I miss his historical presence. There’s simply nobody else like him.

In the “Ask The Guru” section of HRU (full story here) he wrote the following:

“Wouldn’t it be nice if there was some uniformity to harness racing programs? Yearling prices and trainers in previous races are conspicuously missing in many venues. Asking for a friend…..”

I submitted this request for rule changes to the USTA for voting this year:

It would be the right time to do this with million dollar yearlings.

Seeing a horse draw poorly what seems like week after week has been a pet peeve of mine for a long time. I’ve had my rants on the subject. But here I’m going to share some thoughts to help us hopefully understand the subject better.

My bottom line premise for this letter is: if we get a “bad” post draw one race; we get a “good” post draw the next race. Period.

Most recently I’ve “gone bananas” as a result of my horses most recent three draws since returning to racing at Scioto Downs. My post draws have been 10, 10, and 8. Basically, three “bad” draws in a row. This should never be allowed to happen. It’s simply not fair.

But I hear many of you saying right now, “But, sir, things will even out over time.” Will they? I’m sorry, but you have no scientific basis for making this statement. There is no guarantee at all that “balance” will be achieved. Your viewpoint falls under what is referred to as the “gamblers fallacy.”

Hang in there with me as I take you through just one example using the game of roulette (this comes from a textbook I use in the Investments class I teach at a local community college… Fundamentals of Investments, Eighth Edition, Jordan, Miller and Dolvin):

One way to look at the gambler’s fallacy is that because an event has not happened recently, it has become “overdue” and is more likely to occur. People sometimes refer (wrongly) to the “law of averages” in such cases.

Roulette, as some of you know, is a random gambling game where gamblers can make various bets on the spin of the wheel. There are 38 numbers on an American roulette table, 2 green ones, 18 red ones and 18 black ones. One possible bet is to bet whether the spin will result in a red number or in a black number. Suppose a red number has appeared five times in a row. Gamblers will often become confident that the next spin will be black, when the true chance remains at about 50 per cent (of course, it is exactly 18 in 38).

Moving on… Keep hangin’ in there with me…

The misconception arises from the human intuition that the overall odds of the wheel must be reflected in a small number of spins. That is, gamblers often become convinced that the wheel is “due” to hit a black number after a series of red numbers. Gamblers do know that the odds of a black number appearing are always unchanged: 18 in 38. But gamblers cannot help but feel that after a long series of red numbers, a black one must appear to restore the “balance” between red and black numbers over time.

Now, if we go back to my three most recent post draws, some might say I’m due to get a better draw. But as the example above shows, there’s no scientific evidence that will take place. My next race could very well put me in another bad post position. And it’s simply unfair to rely upon luck week after week in determining the post from which my horse will start. But that’s our current system.

I know the USTA is asking for rule changes right now. What I’m describing here is far more than a rule change but rather a change in philosophy on how post draws will be determined.

After it’s decided this is important enough to do, we need a computer. Honestly, if I was a computer programmer I’d do this myself for no charge. But I’m not that smart.

And, I’m not so naïve to know there would need to be dozens of variables plugged into the computer program to make this work. But when all is said and done, I would know that one week my post position will be “good,” while the next week it will be “bad.” Of course, there are varying degrees of good and bad, but you get the idea. We wouldn’t be stuck with consecutive races of “bad” posts.

Would this system be perfect? Of course not. Nothing ever is. But it would be far better than the current system.

Raise your hand now if fairness sounds like a good idea?

If you read this far, thanks for your time. And I hope your next post draw is a good one. I’m sure hoping mine is.

RE: Monticello taken to court over refusal to resume racing

Unfortunately HRU has disintegrated into a mouthpiece for Joe Faraldo, a person disliked by many including me based on a single encounter at Goshen… Now comes Monticello, where no doubt his cronies constitute the legal team paid by horsemen’s funds. It is purely irrational to expect an owner who makes more from casino operations to keep it closed and then open the racetrack which loses revenue. Rather than work in partnership to reach an agreement a lawsuit ensues which will go nowhere. Yes, the horsemen are in a tough spot. But at least it sounds like the backstretch is open and the track is open for training. It won’t be long before Faraldo’s wrongheaded thinking leads to decoupling the casino and the track, and Monticello closes permanently.