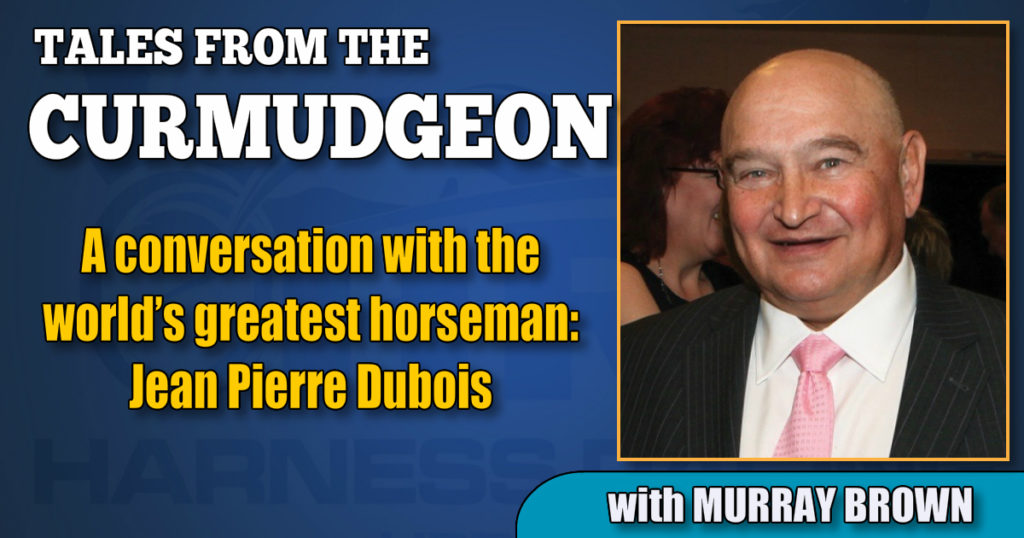 A conversation with the world’s greatest horseman: Jean Pierre Dubois

In theory, doing a story about the greatest horseman in the world and one of its greatest people should be easy. In fact it has been one of my most difficult.

The answer is that the gentleman in question, Monsieur Jean Pierre Dubois, is a humble and self-effacing man, almost beyond description.

Although his achievements in horsedom are and have been without peer, he is a gentleman in its most literal description.

I had a telephone conversation with him last Monday. We were at somewhat of a disadvantage to begin with. Mr. Dubois’ English is adequate, but not quite fluent.

My French is terrible.

Fortunately, we had Jean Pierre’s grandson, Louis Baudron, a noted horseman in his own right, helping us translate my questions and his thoughts.

Before I go any further, we both agreed that we hope this will not be my last interview with Jean Pierre and it certainly is not the most inclusive.

There is so much more that can be covered on a face to face basis.

The telephone was not the best means of doing this. We hope to do a further one, face to face, between two old friends, perhaps in Lexington this fall or down the road in France. I vote for the latter, but I would be most pleased with the former.

Jean Pierre was born in 1940 in the small French town of Quivert. His father was a horseman and working with horses was the only thing that JP has ever wanted to do.

He describes his career thusly: “I’ve had the chance to live my passion, so it’s like my entire life has been a vacation.”

He has excelled as an owner, breeder, trainer, driver/jockey of trotters, monte trotters, thoroughbreds and jumpers.

When asked which pursuit was his favorite, his immediate response was as a breeder.

“It’s the one area where we have the chance to make and perhaps even change history,” he said.

What was the horse that changed your life? I asked.

“I have had many very good horses and some great ones, but the one who has probably had the greatest affect on my career has been Coktail Jet. I bred him, raised him, raced him and managed his brilliant stud career. Of course, all of the credit goes to the horse himself. I was only lucky enough to have been a factor in his reaching his success.”

You are just as likely to see JP with a pitchfork in his hands or driving a horse van as you are to see him training and driving in some of the world’s classic races.

There is no pretension about the man. He gets up early in the morning, works with his horses all day and goes to bed early. His work is also his fun.

He also has, and has had, training stables and breeding farms in numerous venues — France, of course, but also the United States, Canada, Italy and Australia.

When asked the difference between the French trotter and the American one, he said, “they are much closer in type than they used to be. Years ago, they were vastly different. The American horse had much more speed and natural ability. The French horse was bigger, stronger and probably had more endurance.”

I suggested that he — and for some time before him, Henri Levesque — might be the main reasons why they have evolved.

He didn’t disagree, but his modesty prevented him from saying much more.

Mr. Levesque bred his great French mare Roquepine to Stars Pride to produce Florestan, arguably the most influential of all trotting stallions in the world.

Initially, the French trotting breed refused to even accept Florestan in its registry. Eventually, they purchased him and stood him at the French National Stud. As they say, the rest is history.

During the few years when the French approved of allowing the breeding of French and American blood, Jean Pierre jumped in with both feet and revolutionized the world’s trotting picture.

He bred the Super Bowl mare Armbro Glamour to the French stallion Quouky Williams and produced the great racehorse and sire Coktail Jet.

He then bred Coktail Jet to his good mare Guilty Love — who was by an Italian-sired stallion out of the Speedy Somolli mare Amour Daunou — to produce the great trotter and equally great sire Love You.

There were several French breeders who were opposed to this being allowed, fearing that this would weaken the French trotter.

The noted French breeder Albert Viel was quoted as saying that infusing the French trotter with American blood would be comparable to planting weeds in one’s garden.

For most horsemen to have made a mark of this magnitude would have been enough, but certainly not for Monsieur Dubois.

There are many people who consider Varenne to have been the greatest trotter ever. Jean Pierre Dubois was the co-breeder of Varenne (with a close friend in Italy). Jean Pierre also developed Varenne before the trotter was sold.

More recently, Dubois is the breeder of Ecurie D, a trotter many consider to be the best in Europe today — and one that at the age of 4 has shown as much, if not more, talent than any of Dubois’ great horses.

Jean Pierre has not only made and developed several great sires, but he is also one himself.

His two sons, Jean-Etienne and Jean-Philippe, have carried on the family tradition of being both successful trainer drivers and breeders of top horses.

Now the torch has been passed to grandson Louis Baudron, already a well-recognized and successful horseman.

I shared with him a conversation I had with Michel Lachance last week where Mike said to me, “You know how many times I’ve told you about how I idolized Keith Waples and how much I think of him. Let me tell you, Jean Pierre Dubois is very close to him, if not his equal as the greatest I’ve ever known.”

Jimmy Takter said right here two weeks ago that Jean Pierre is the greatest horseman he has ever known.

I wanted to get an Jean Pierre’s opinion about several people we both knew:

Daniel Wildenstein – “Mr. Wildenstein was perhaps the greatest art dealer and art historian of the 20th century. He was also among the most successful thoroughbred and jumper owners of that same century. He was a man known as being strong willed and known for switching trainers and jockeys regardless of how much success he had with them.”

Mr. Wildenstein came to racing trotters fairly late in his life. He was known to have said that JP Dubois was the greatest horseman he had ever known. “If I had met Jean Pierre earlier, he would have been the only trainer I ever had,” Wildenstein once said.

Moe Graif – “When I first came to North America, Moe Graif became my main man. He was fluent in both English and French and knew everybody that was worth knowing. He handled most of my bookwork. If you gave Moe an assignment, you were guaranteed that whatever it was, it would get done. If he was your friend, you never had a better one.”

Jonel Chriachos – Before he went to work with his own stable, Jean Pierre worked for “Jonny” as he was called. He was a Greek horse trainer, who once said, “I might not have been the greatest horse trainer in France, but there was no doubt I was the best trainer of owners ever.” He had amassed the most well-known collection of owners ever, including the Aga Khan and many members of extreme wealth and nobility. It was to Chriachos that John Simpson had entrusted the great mare Elma throughout her very successful European racing career. Jean Pierre was working with Jonny at the time. It might just be a coincidence, but when JP entered the international trotting waters it was with Armbro Glamour, a mare that traces to the immediate maternal family of Elma, a mare who he remembered with fondness, to produce his top horse Cocktail Jet.

I met Chriachos one time when he visited us at the Hanover Fairgrounds. I will never forget one of the things he said that day. “The man looking for the perfect horse or the perfect woman will spend the rest of his life without a horse in his stable or a woman in his bed.”

Is it sexist? Indeed it is, but perhaps there is some truth in what he said.

David Reid – I am including him because my friend “Doveed” told me to ask JP about him. Jean Pierre responded: “He’s a very nice young man who works very hard.”

I asked him what American trainers could learn from the French. His answer was, “basically nothing”, but in his usual humble manner, he said he had learned a lot from some like Stanley Dancer, Billy Haughton, Delvin Miller, Jimmy Takter and Johnny Simpson.

When Herve Filion sent the great mare Grades Singing to compete in the French Classics races, he sent her to Jean Pierre Dubois. She finished second in the Prix d’Amerique with Jean Pierre driving.

He still has his farm in Kentucky where about a dozen or so mares are resident. They are divided among American, French and Franco American mares. They are being bred to American stallions.

I’ll leave this off by saying.