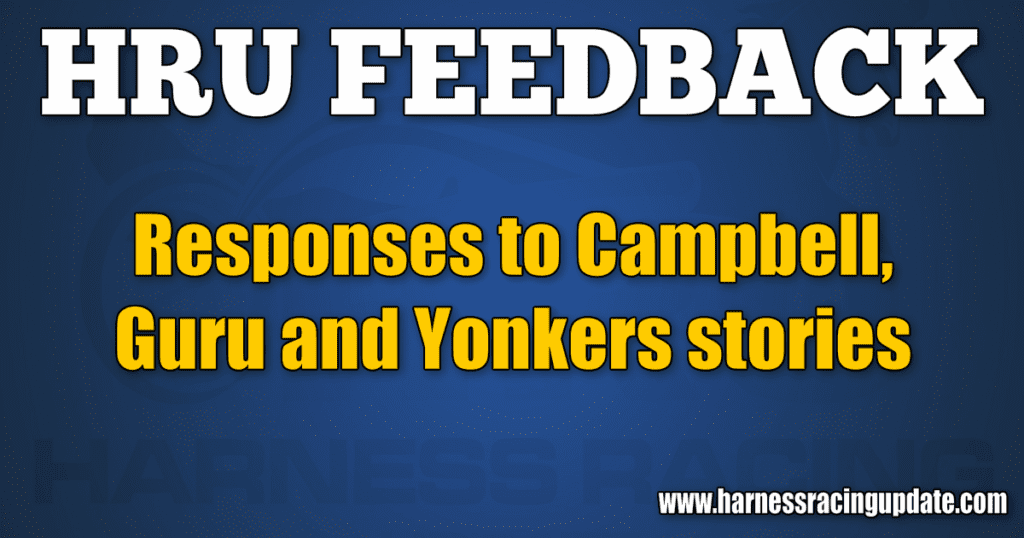 1. I don’t want our bettors and fans to have “bettors beware” races as a general matter, but particularly I don’t want them as part of our industry showcase. It is wrong.

2. Presently, the Breeders Crown is really the Tracks and Owners Crown; the stallion owners need to pay significantly more.

4. We should avoid situations where a single trainer dominates the starters in any race; it isn’t good for our bettors and credibility.

5. We should increase the significance of our top Grand Circuit races as stepping stones to the Breeders Crown.

6. We should limit the number of preferential starting positions to further increase the betting profile of our Finals.

7. Two-year-old Finals shall have 10 starters; three-year-old and aged races may have 12 starters. Again, this enhances the betting profile.

Accordingly, my proposal is:

1. The winners of the two highest purse Grand Circuit races for the division shall have an automatic right of entry (at normal fees if eligible and at supplementary amount if not).

2. The highest money winner in the division shall have an automatic right of entry if not a horse in point 1.

3. If there are 18 or more entrants, there shall be two eliminations for up to the highest 22 money earners. The first two finishers in each elimination shall qualify. Horses in categories 1 and 2 may start in eliminations but will lose their entry status unless they finish first or second. Eliminations will go for $75,000.

5. To protect the interests of the “true believers” in their lower-earning horses (or those breaking in an elimination, for example), one spot in the two-year-old finals and two spots in the other finals will be available for eligible horses at a $75,000 entry fee (drawn by lot if more applicants than spots).

8. Trainers should be limited to two entrants in a Final (increased to three if they have a category 1 or 2 qualifier).

Mr. Campbell’s article (full article here) while being well meant, demonstrates the disconnect between those in charge of the general health of our sport and the reality “on the ground”. To think that our current judging overseers will police the racing integrity is just plain naive and does little to alleviate our current concerns/issues. If those in charge of INTEGRITY were really in our corner then elimination races could still be run, but would be designated as “Non Betting” races. But, what we have are “Money Grabbers” whose sole purpose is to line their pockets with their 22 per cent (or excessively more as is the case in Pennsylvania) take-out of all monies wagered — NOT doing the right thing for their customers. This is the mentality of our overseers.

So, can we rely on the racing officials to police themselves and do the right and fair thing for us? Let’s look at a few examples outside of racing. First, take the American government, while we have permitted them to control and regulate our dollars, there is NO current program where they have demonstrated proficiency at successfully managing even break even. Or, let’s look at the police departments across the country, when was the last time an internal police review board found officers wrong in egregious behavior?

So, Mr. Campbell you want to bring positive, effective change, throw away the current playbook and start over and stop listening to the money grabbers telling you what can’t be done. And, time is short because once the casino portion of the racinos across the country bring in sports betting, the racing bottom line will plummet.

I just read John Campbell’s defense of eliminations for the Crown races (full story here). Usually I agree with him, but last year’s elims for the 3-year-old and Aged horses were a disgrace! Judges should have been handing out penalties left and right for not trying. It was pathetic. I don’t bet, but was just appalled that the judges did nothing. I don’t care if it’s our best drivers, they didn’t drive like it! Drove like they didn’t care. It was horrible to see harness racing showing off like this? Drivers not trying, not caring. Pathetic. Here’s a suggestion: Tell judges to start handing out penalties immediately! Big penalties.

Another response to Campbell

Campbell’s honesty is shocking. Why? Because it brings to the forefront the real problem with elimination heats. If you’re not going to the “bottom” in an elim because the big money race is next week, putting bettors in a guessing – gambling game is a fraud. Talk of horsemen’s dreams of making a final is no different than a gambler’s dreaming by playing with next month’s rent money.

Okay. If you want elims for all the reasons Campbell talks about, make them non betting. Give the gambler a shot in the finals, when going to the bottom matters. Or try this: summarize Campbell’s logic, insert it on the program page boldly beneath the race conditions. In short, you’re a desperate fool betting on this race. The trainer and the driver have an incentive to finish no worse than fifth.

After reading Ronnie’s response to Neil Zelkin’s question about French racing (full response here) I was struck by one thought… I wonder if the last time Ronnie was in France had Édith Piaf become a star yet?

Just in case anyone is interested, the French stud book was opened. And it had a profound effect on the French breed. Since the ‘90s almost all the French winners of the PD’A (Prix d’Amerique) have had a healthy dose of American blood. Both top and bottom. And not way back. Close. And regarding Ronnie’s stereotype of the French trotter. There is no typical size. Cocktail Jet was small. Offshore Dream and Bold Eagle are below medium. Of course there have been big French horses winning also. But if you are looking for a common denominator in French winners of the PD’A, or any winners for that matter, it is not size. And as far as disparaging the American trotter because they are not competitive in the PD’A, nothing could be further from the truth. Considering the limited participation of American trotters, the success rate has been phenomenal. Going back to the Hanovers — Nike, Delmonica and Dart. Then Sea Cove. And of course the great Moni Maker. European bred but essentially American pedigreed horses have also won frequently. Ina Scot, Abano As, Giant Neo, Varenne, and Maharajah are all completely or almost Americans.

Regarding who can participate in the PD’A. The Guru got that wrong, too. Like the final of every other sport, there are eliminations, or in this case qualifications, to determine who gets in. During the winter meet at Vincennes there are six races that are part of the Equipe Series. In four of these races, the first three finishers are guaranteed a spot in the PD’A. In the two other races, the Prix Continental, for 4-year-olds and the Prix Tenor de Baune for 5-year-olds, only the winners qualify. So theoretically you could have 14 of the PD’A starters determined by horses who qualified from the Equipe Series. The remaining starting slots would then go to the highest money winners not yet qualified — with an earnings adjusted allowance for younger horses. The whole series is entertaining, and from a betting point of view, intriguing. A bettor can try to use who is qualified and who is not as part of his betting strategy. Or he may make a token bet or not bet at all. Just watch and learn and wait for the PD’A. No one seems to be disturbed if an already qualified horse races conservatively and finishes out of the money. Or as in the case of the guaranteed starter Bold Eagle, his team decided to race him very aggressively in one of the qualification races. Only they know why. He finished sixth. He then came back and won the next qualification. The crowd loved it. That’s what separates us from casino gambling. The living, breathing, muscle and sweat element.

And finally, to answer Mr. Zelkin’s question about big fields. Those races with really big fields would be impossible with a starting car. The standing start makes it possible.

In your article dealing with changes with Yonkers a year in review (full article here), as a long fan of harness racing now 70 years old I have seen a lot of changes throughout the years along with the scandals that plagued the sport that still believed today that it is fixed. I still see friends who used to go trotters who basically dropped out who hold the common belief the sport is not on the level. Young people are not going and all I see are a dying generation of older fans. Yonkers and other tracks have to follow the Europeans with cheaper exotic bets.

Yonkers got rid of the passing lane but should have left the finish line as is. I see too many races now where if the old finish line was in place the outcome might be different.   In closing, Yonkers should restore the old finish line and innovate new exotics like Jeff G is accomplishing at the Meadowlands.