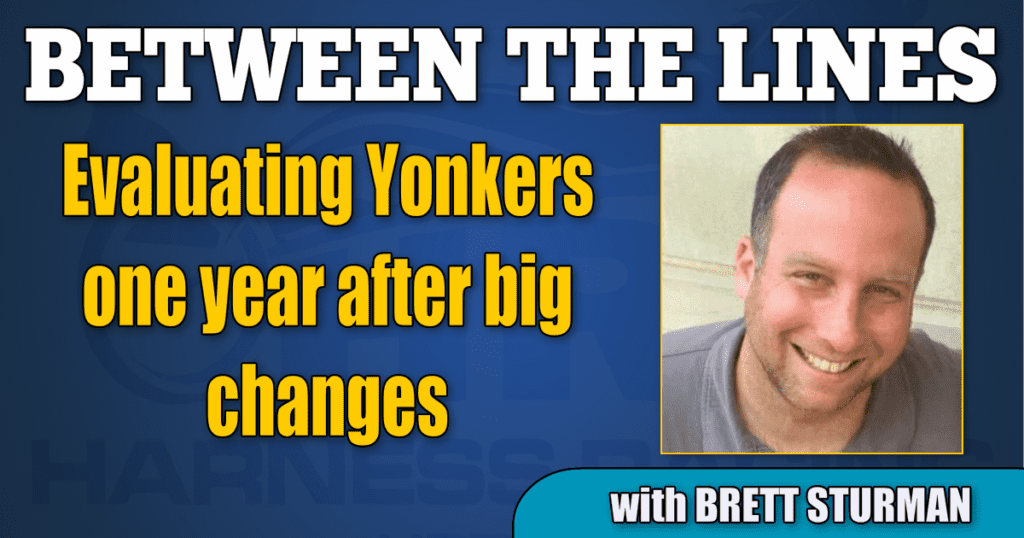 Taking stock at Yonkers a year after big changes were implemented

The start of the new racing season at Yonkers this week marks one year since the track began the 2018 season amidst changes designated to improve the racing product. Of these changes, the one most highly publicized and debated was the removal of the passing lane. It was believed that if the passing lane were removed it would force drivers to adopt a more aggressive racing style, thus providing a more watchable and bet-able style of racing, all the while leading to an increase in handle. With a full year now in the books, how did the track fare last year?

The metric above all used in determining the success of a track is handle, and last year handle at Yonkers was up considerably from the year prior. Especially in the first quarter of last year, handle went gangbusters at the track and it helped set the tone for the rest of the year.

Leveraging a ton of hype from changes made to the track, as well as exposure through TVG and free programs offered, Monday easily became the day of the racing week that Yonkers most capitalized on. In the first three months of the year alone, Monday handle averaged $827,000 in 2018 compared to just $428,000 for the same three months in 2017. The hot trend continued through May, when Yonkers was still topping an average $800,000 that month.

From there, however, the monthly Monday numbers leave a bit more to interpretation. Handle dropped nearly 20 per cent between May and June, and then remained more-or-less static through the rest of the year where it bottomed out at $473,000 for Mondays in November.

I suppose an argument could be made that from a seasonal standpoint, that as more tracks open back up in the spring and summer Yonkers handle will inevitably drop from increasing competition, but the same thing didn’t happen in 2017. In that year — while handle was consistently lower than 2018, on a month to month basis — there was not a steady monthly decrease in handle the way that there was in 2018.

There are two ways one could look at this. Either handle was so low early in 2017 that it couldn’t have possibly gone much worse no matter the circumstances, or maybe more likely, handle declined in 2018 as the early year hype faded away, though remaining far above the 2017 monthly equivalent.

Though increase in handle is the overarching goal, other changes were implemented that were designed to make races more competitive. In addition to the removal of the passing lane, the finish line was moved up in the stretch, with the intent to give outside horses more of a run at the start of a race before entering into the first turn.

From these track configuration changes, it does not appear the results are different with what is typically seen of half-mile tracks; passing lane or no passing lane.

As one would expect with any half-mile track, post 1 won the highest percentage of races, 18.1 per cent of the time throughout the year. Outside of the pole position, there isn’t much change between posts 2 through 5 although there are a couple of noteworthy observations. For example, post 2 (15.6 per cent) actually wins less than posts 2, 3, 4 and 5, and at 17.2 per cent post 4 was the second highest winning percentage. The subtle differences though between the posts that come outside of the rail aren’t unique to Yonkers, though. The same can be seen at Freehold, Monticello, and Northfield – all tracks with passing lanes – where it’s annually common that a post 5 shows better numbers than a post 2.

The other post position statistics that has remained consistent is the fact that the outside starting horses still face a monumental hurdle to win races. Post 7 at Yonkers won just 6 per cent of the time last year and post 8 won only 4 per cent of the time. These numbers are nearly identical to half-mile post position outcomes at other tracks and that have existed since the beginning of half-mile racing.

Overall, favorites have been winning the last year at Yonkers at 43 per cent, which is a bit better from a competition standpoint than Freehold and Monticello as examples, where favorites win at 46 per cent. Again, it’s hard to attribute that solely to track changes or perhaps it’s simply a matter of more competitive races and horses at Yonkers than tracks with lower quality stock, but winning favorites do occur less at Yonkers than other half-milers.

Other changes have likely helped fuel the Yonkers handle gains, as well. Though post dragging is now the norm for all harness tracks, Yonkers has become the poster child for that practice. In line with the post delay perpetuity, Yonkers will only go off with a race when it doesn’t have to share screen time with any other tracks with races in progress. This practice may drive a lot of people crazy, but more people are betting the product than before.

Ditto with the removal of the passing lane. I could argue from here to eternity about the need for the passing lane on half-mile tracks, but the numbers from bettors suggest otherwise. Evidently what people want is (debatably) more racing movement even if that means more horses being locked in through the stretch, and the big increase in handle bears that out.

Aided in part by its early-year numbers, Yonkers showed a massive near-50 per cent increase last year from 2017 on its Mondays alone. Whether or not the track can replicate those numbers this year remains to be seen, but it seems clear that Yonkers was successful in gaining a following last year that it lacked in years prior. Even if you don’t agree with all the changes made, the results are doing the talking.