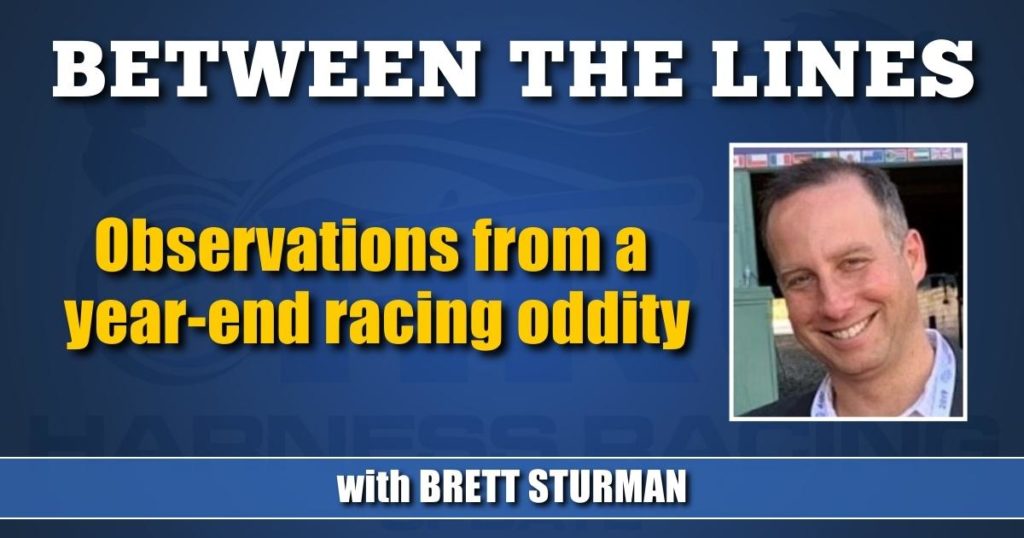 Observations from a year-end racing oddity

One of the most uncommon ways to lose (or luck into winning) a race occurred at The Meadows last Thursday (Dec. 22). Though rare, I suppose it’s not totally unheard of for the top-two finishers in a race to be disqualified to last and second-to-last. However, the way this instance occurred isn’t anything at least I’ve seen before.

In the opener on the card, a conditioned event for non-winners of 3 races or $25,000, the way the race unfolded appeared entirely innocuous at first glance. From the second the starting car let the field go, the top two favorites in the race, Party Central (3-5) stepped around second choice Droptherakefreddy (8-5), paraded around the track 1-2, not seriously challenged by anyone else the entire mile. In the end, Party Central held comfortably for the win by about a length over Droptherakefreddy, but that’s when things became interesting.

After a couple of minutes, an inquiry was announced, looking into both top finishers for a possible pylon violation approaching the half-mile. Credit to the capabilities of the newer high-definition feed at the track, it became incontrovertible as to what had occurred. Unlike pylon reviews in the past that occurred at various tracks with then grainy video feeds, in this race, it could be seen clearly that race leader Party Central went inside four pylons around that clubhouse turn as did Droptherakefreddy, who was following the same path right behind.

Following the rules for horses going inside three or more consecutive pylons, both horses were disqualified to the final two positions. Though the rules were followed correctly, was it necessarily the correct decision from a pari-mutuel standpoint?

Under the pylon violation rules, judges have discretion in disqualifying a horse if it went inside only a single pylon, if it was determined the horse gained an unfair advantage. But what about the opposite? In this race, both horses went inside four pylons (admittedly, a lot), but didn’t gain any type of advantage in the race in doing so. It occurred while they were slowing to the half-mile in a :29.3 second quarter, and at that same time all horses in the race were still in straight alignment. Even going down the backstretch to three quarters, the first-over horse barely got into the third position.

With the outcome of the race completely unaffected by the pylon violation, should it be possible that in the future similar situations could be dealt with by assessing driver fines solely, instead of changing the placings of the race? As a result of the disqualification, the revised top three finishers who would have never been close otherwise, triggered huge payouts, including show prices for each horse of $29, $23.80, and $40.40.

As a footnote to the race, there must be a way that payoffs are recorded consistently across harness racing. HRU columnist Dean Towers (correctly) wrote recently how low minimum bet wagers dilute payout amounts. In addition to that, payoffs by base increment wager are reported differently by track, and even by wager type.

From the same Meadows race, the $2 trifecta as listed in the official charts show a payout amount of $17,102. But it also shows that the entire pool was $11,414. How can the payout be more than the total pool? Obviously, the trifecta was hit for less than a $2 increment. But then, why list it at a $2 minimum if no one had it? At that point, why not list it for a $20 minimum to really emphasize the payout? Where it gets more confusing is that immediately below that is the superfecta payout, which shows a payout of $737 for a ten-cent wager. Doing the math if things were reported equal, it looks like the trifecta paid out more than the superfecta. The payout difference isn’t an issue especially with smaller pools, but it should be easier to have a consistent base payout.

When the Dan Patch winners for trotters were announced Tuesday, there were two winners that differed from my prior predictions here. The more surprising of the two was Joviality over Jiggy Jog for 3-year-old female trotter.

It’s not like either of those aren’t fully deserving as it is, but Jiggy Jog closed out the year first by beating Joviality in the Kentucky Filly Futurity. I would concede that Joviality was at a tactical disadvantage in that race having started from the second tier, but then after both fillies winning their Breeders Crown eliminations, Jiggy Jog was convincing in her win in the Breeders Crown final. With Joviality then losing next out at Dover, perhaps she just got a little tired at the end of the year, but in my opinion Jiggy Jog did enough on the track to earn it.

The other I was wrong about was the 3-year-old male trotters, where Cool Papa Bell beat King Of The North by essentially a 2-1 margin. Winning the award heavily weighted by his surprise Hambletonian win, that carried more influence than King Of The North’s strong end to the season, including resounding wins in his Breeders Crown elimination and final.

One common factor in both those divisional races is that the ones I was wrong about had supporting New York Sire Stake wins. If I have a bias, I suppose it’s giving more consideration to races won on big tracks (Meadowlands, Woodbine Mohawk, Red Mile, Hoosier), as opposed to races being won at Tioga with very little handle, or at a half-mile track like Yonkers.