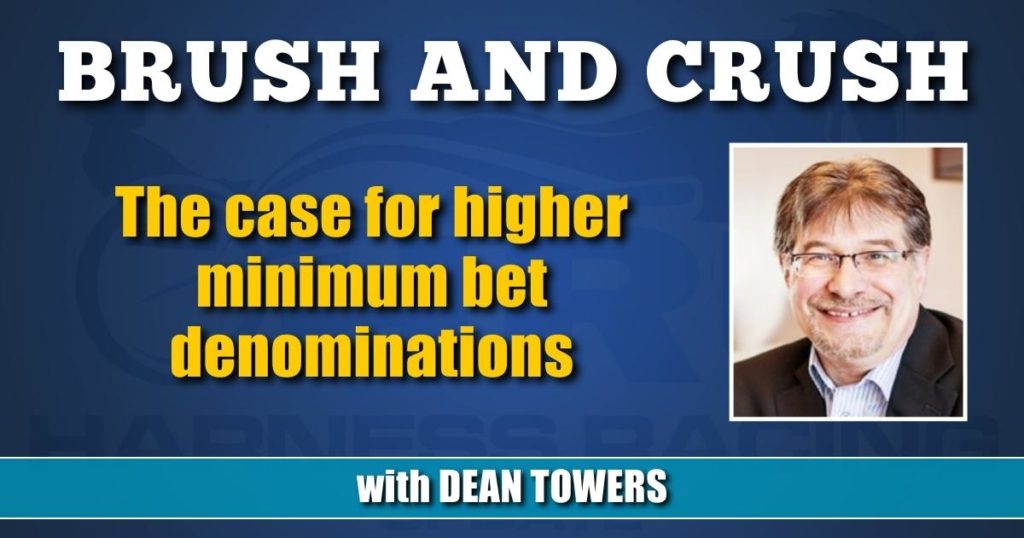 In modern harness racing, some 20 cent and 50 cent bets have a long-term negative effects.

On Monday evening at Woodbine Mohawk Park, the 5th race Pick 3 payoff was $3.46, and in race 7 the Pick 4 payout was $20.36. Over at the other extreme, we see serial bet payoffs with longer shots at little more than the parlay price.

In my view, it has become a problem.

The lowering of minimum bets was implemented a dozen or so years ago, and the thinking behind the change was probably sound. In fact, presenting at wagering conferences at the time, I initially supported them. Allowing customers more coverage on their serial bets, or on harder to hit verticals like superfectas meant a better user experience and would allow customers to cash more tickets. It should have, in theory, raised short-term handles (and this was the case).

However, when it comes to betting markets, it’s not what you see on the top line, but what’s bubbling beneath the surface that matters.

Harness racing has changed quite bit in 20 years. The days of deep fields where six or seven horses could win a race are not seen nearly as much. Fields at the highest handle tracks can be watered down because a slot track (regardless of how much handle it draws) lies just next door. ‘Waiting next week for a better post or class drop’ has been around forever in the sport, but seems to be especially prevalent now, making field size even shorter.

In this environment, what are we selling to the general public? We’re giving them a low minimum which invites them to spread. This results in 4 by 4 by 4 pick 3 tickets for $12.80, sitting down for over an hour to watch the races, and when they hit, they cash $3.46.

Horse racing’s edge against sports betting is “bet a little to win a lot.” With low minimums this has pivoted to “bet a little and maybe you’ll break even” in far too many cases. We’re competing not with gambling skill games, but penny slots.

For our other important demographic — the seasoned customer – it’s arguably worse.

These bettors, as many of you are, try each night to sniff out horses others won’t be on, allowing them a worthwhile betting edge. At old minimums, like $1 for a pick 4, or even 50 cents for a pick 5, the crowd could not spread the sequence as much, which inflated the value of these horses, resulting in some good payoffs – the six or eight times parlay value that kept us coming back each day.

Additionally, one of the major reasons our sport gets at least some play from outside of it (e.g., thoroughbred players or some sports bettors), is due to the carryover. As we all know, carryovers are often a large takeout reduction that drives handle. When you are offering out $250,000 that can attract $150,000 in new money, you don’t have to be a math major to figure out it’s worth a bet. You also don’t need to be Descartes to know that lower bet minimums have decreased the prevalence of the carryover. Friday’s $47,000 carryover at the Meadowlands in the Pick 5 was the exception not the rule.

If carryovers are a way forward for our sport in attracting new money in this super-competitive gambling landscape, low minimums, I strongly believe, are self-sabotage.

I understand the reticence to go back to the way it was. Short-term handle increases through allowing people to spread more for less money are real, and if the sport changed it would likely see a short-term handle decline. And, of course, some people love the ability to spread, because even if they’re losing each night they can hit an extra ticket or two. They probably won’t be happy.

But the longer-term aggregate view should always be paramount, and under that criteria, the choice to me is clear: Higher minimums make the sport a better betting game. They’re needed more than ever in the maturing, competitive wagering landscape.