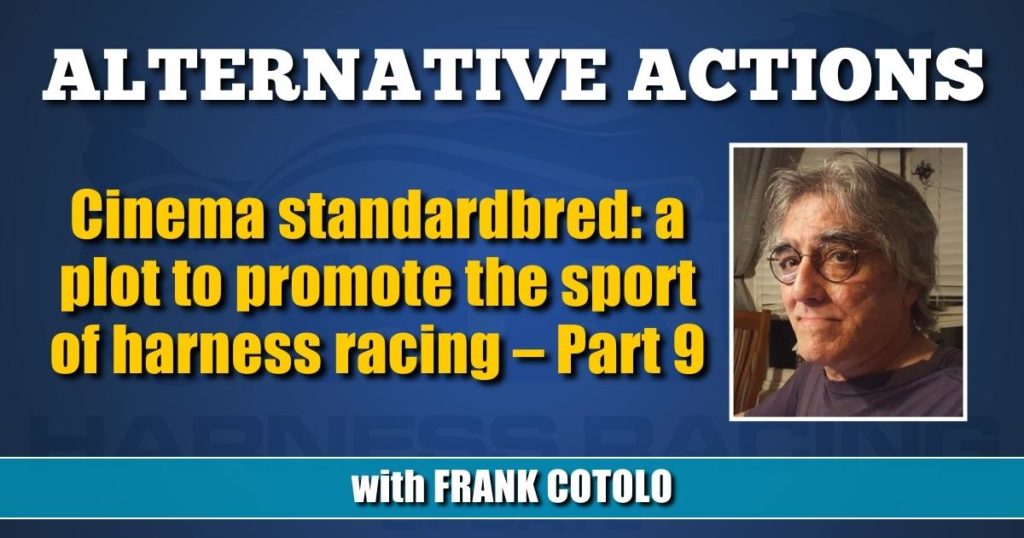 Cinema standardbred: a plot to promote the sport of harness racing – Part 9

Alternative Actions (AA) launched this series offering a solution to the film industry’s ambivalence towards harness racing: someone needs to write a screenplay that has nothing to do with harness racing.

The reimagined screenplay is not a gimmick. It gets the attention of producers because they know it is a powerhouse launching pad for a film project; they know the building blocks of a movie are the characters and their stories. They know “The Godfather” is a reimagined “King Lear.”

Famous screenwriter Dalton Trumbo once pitched a movie to a producer. “The story of a gangster, his rise and fall.” The producer said, “I’ve seen that a few times.” Trumbo responded, “Because it always makes money.” Even a moderately successful reimagined script-to-movie focusing on strong characters can introduce the sport to hordes of people continuing to ignore it.

The series’ example, using “Frankenstein,” more than suggests the literary world is lousy with examples for your “Frankenstein” model; it proves the perfect harness-racing promotional vehicle can get major attention. Sure, the script is only the beginning, but without one there is no movie. From experience, as well, I saw many screenwriters wasting their time looking to write “something new,” only to witness rejection by producers worried to become involved with… something new.

A story driven by strong characters can work anywhere, any time. In a reimagined “Of Mice And Men” the setting does not matter; the era does not matter. Do some research. Make a list of possibilities. Shuffle the sources from one genre to another. Find a harness racing scenario that does not draw attention to itself. Be a writer first and a standardbred lover last. Another thing, while researching and writing, do not fall victim to using any of the source material, even when you have altered its facade. Stick to reimagining.

I was taught this lesson early in my career. I was a young writer in Hollywood trying to get to sell jokes to veteran performers. I submitted material to a long-time comedian. Expressionless, he read the jokes I typed on hotel stationary.

“You’re trying too hard,” he said.

“What do you mean? Aren’t my jokes funny?”

“Look, you’re wet behind the ears. You don’t get it, so let me put it to you straight. Amateurs imitate. Professionals steal.”

I changed my approach to writing once I understood he meant what we call “reimagining.”

Another professional comic came along and said, “Remember, there are only five jokes in the world.”

Truth sunk in when I awoke to that comment. It was like Aristotle telling his philosophy students, “There is nothing new under the sun” years before the invention of the Whoopee cushion.

Do not call the process theft if that makes you feel better. Remember reimagining leaves plenty of room for creativity.

I am sure there are more than a few of you clever enough to take full advantage of reimagining a script where harness racing components come off naturally; one that does not intimidate potential investors because “it has that cart horse racing thing in it.”

P.S. Anyone with questions or comments concerning any aspect of the reimagining process or other sources for it or to run an idea by me may email me through HRU.