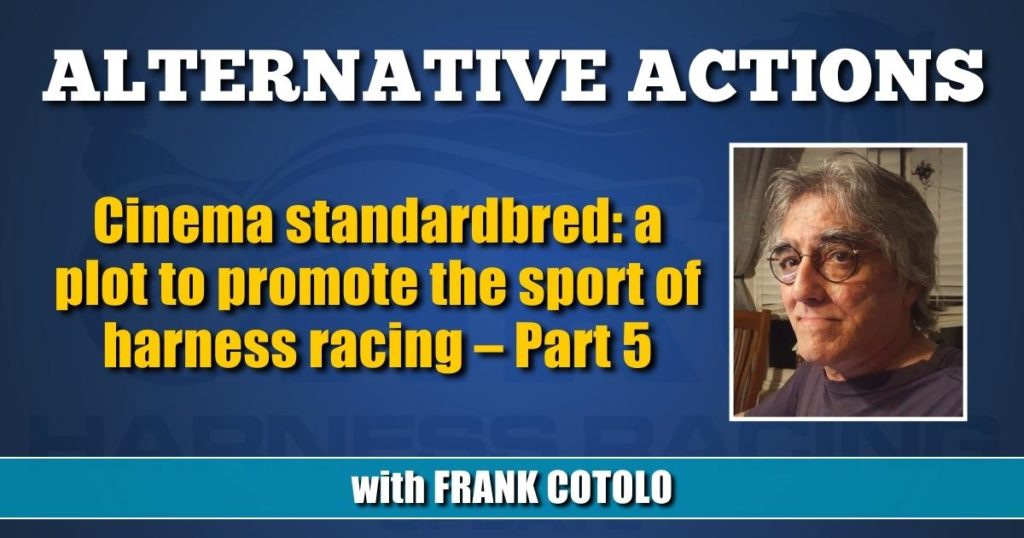 Cinema standardbred: a plot to promote the sport of harness racing – Part 5

Year after year movies are released. Audiences and critics praise many of them and hand out award after award. Make no mistake about one thing, though. A movie is a community project. A veritable city neighborhood filled with residents have their creative and technical hands in it, all under the supervision of the Big Dog — the director. Yet, every movie begins with one or two writers describing a movie, i.e., a script.

The journey of script-to-film is long and arduous, but scriptwriters have total control and freedom before the work is put through the community-art mill. Even so, screen writers, especially newcomers, are inundated before writing a word. The good news is they do not have to be stunned before starting because there is a free writing tool offering countless ideas for stories (from start to finish) and it is free.

This is not a scam; this is a gift to be used that is accepted by the community of art. It is a library of well-constructed characters and stories used over and over — because they work. The proof is in hundreds of scripts made into movies. I offer proof blatantly, shamelessly, gratis adaptations.

You may not have struggled through Homer’s 15th century epic poem “The Odyssey” but enjoyed the 2000 film, “O Brother Where Art Thou?” The Coen brothers turned the plot about Greek hero Odysseus’ journey home war into a satire about three convicts escaping prison to search for treasure.

Re-imagining classic plots without being accused of plagiarism is common using classic literature. A wealth of film scripts are smeared with Shakespearean literary plots, themes, premises and even dialogue. “Motocrossed” (2001) is “Twelfth Night.” “10 Things I Hate About You” (1999) used “Taming Of The Shrew” and Cole Porter’s “Kiss Me Kate” was a Broadway musical about “Shrew” that became a musical film. Disney’s 1994 animated hit, “Lion King” took generously from “Hamlet” and “West Side Story” is an adaptive “Romeo & Juliet.”

Steve Martin’s 1987 “Roxanne” was a contemporary version of Edmond Rostund’s 1897 “Cyrano de Bergerac.” Broadway’s “Man of La Mancha” was book one of Miguel de Cervantes’ 17th-century novel “Don Quixote.” And on and on.

Some movies have strong similarities to other movies, thanks to inspiration, which rarely is indicted for copyright infringement. The original “The Magnificent Seven” is a cultural spin on Akira Kurosawa’s “Seven Samurai.” The 1981 space thriller “Outland” owes its story structure to 1952’s “High Noon,” and the original “Alien” is a glossy rendering of 1958’s “It! The Terror From Beyond Space.”

There are countless others but I rest my case. If you look into it, the volume of free and available adaptations is vast; it is a library abundant with the basic tools any screen writer needs to dismiss all excuses for not starting to write a screenplay or, for the matter of this series, not using harness racing as the “atmosphere” to support a proven-to-work premise from another literary source. I say proven because though the foundations of any screenplay are finite, they still allow great freedoms to be creative.

It is time to lay the groundwork. I am going to explain my process; show you how best to re-imagine a classic literary piece delivering elements needed to write your screenplay with a harness-racing presence. Purely for use in this exercise, I will choose the classic piece and its premise (thematic truth) and follow through with the process.

To show the process durable, start by choosing a genre. That’s right, it’s your choice. Do you want the screenplay to be science fiction, comedy, horror? Choose carefully because you will have to be loyal to the genre. I am going to use drama in modern times.

The novel itself is based upon another classic source — the Greek myth of Prometheus, a human who steals fire from the gods to become god-like. There are a number of premises to work with when re-imagining. The source is a guide.

My re-imagining will be driven by the premise: “Vanity leads to self-destruction.” I need not be concerned about a title or a specific location where the characters develop. I am merely a servant of the premise. Every scene in my screenplay has one purpose–move the story along and nurture the development of the characters so the completed script proves the premise.

The process ensues in the next part of the series.