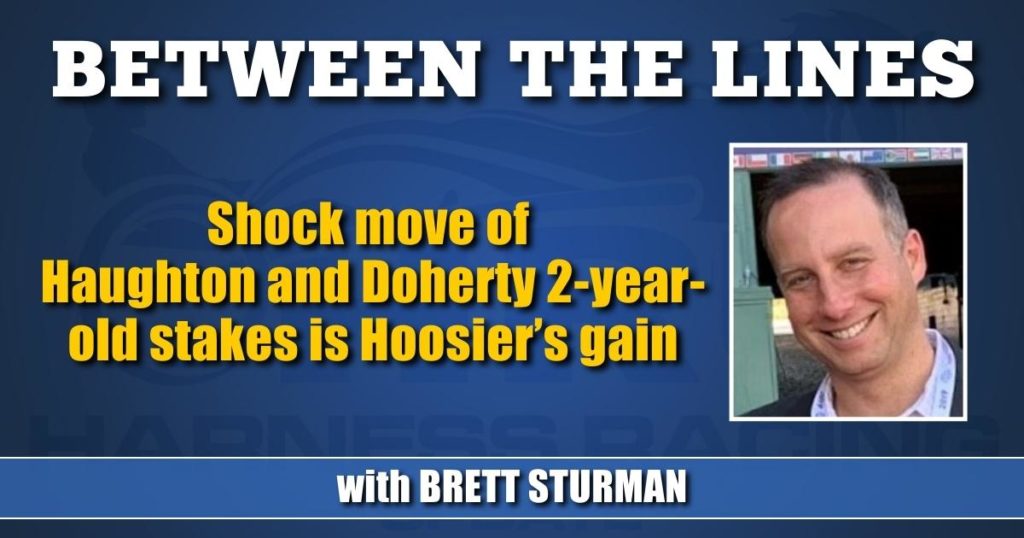 The 2-year-old trotting stakes dynamic for the 2023 season took an unexpected turn last week when it was announced that the Peter Haughton Memorial for colts and Jim Doherty Memorial for fillies will be leaving the Meadowlands for Hoosier Park next year.

What made the move profound for the Meadowlands to relinquish control of the races to the Hambletonian Society, is that these aren’t any two ordinary or mid-major stakes that routinely move from track to track. These two stakes were staples of the Meadowlands, and moreover both races have never known any home other than Meadowlands since the Haughton’s inception in 1981. The inaugural Doherty (raced as the Merrie Annabelle up to 2015) goes all the way back to 1977. The names of winners in the races over the years are legendary.

Numerous reasons for the change have been cited, including comments directly from Meadowlands owner Jeff Gural in last week’s Harness Racing Update feedback, where ultimately it was a matter of shifting support to New Jersey-bred 2-year-old races. Whether the decision was made to accommodate the scheduling of 2-year-old New Jersey Sire Stakes and an New Jersey Championship series, non-eligibility of first crop Greenshoe offspring, purse account considerations or anything in addition, it’s unquestionable that the two stakes had long since carried a special niche as being part of the Hambletonian Day card.

As the Haughton and Doherty leave the Meadowlands, they’ll find a new home for the upcoming year at Harrah’s Hoosier Park. The addition of the stakes will give further ascension to the quality of open stakes races across the Midwest, and more specifically, at Hoosier. For a track that coincidentally plays host to the next Breeders Crown, a pumped-up Hoosier Park will be one of the most visible tracks on the continent with its 2023 stakes schedule.

In a press release issued last week when the announcement was made, Sept. 15 was noted as the date when the two stakes would be raced. Though, in conversation this week with vice president and general manager at Harrah’s Hoosier, Rick Moore, that date is still yet to be finalized.

“We’re thinking that it may be a little bit beyond Hambletonian Day, maybe into September, but racing secretary Scott Peine and I have to finalize it,” said Moore. “We’re looking around to see what date works best for these horses. Not for us, but for the horses that come to Harrah’s Hoosier Park; what would make sense for them and for the majority of the trainers’ schedules, and that’s where we’ll place them.”

The open stakes schedules at Harrah’s Hoosier Park has generally been highlighted by its free-for-all races, the Dan Patch, Caesars Trotting Classic and Hoosier Park Pacing Derby. This past year certainly exemplified that as the track drew superstars Bulldog Hanover (twice, including his first start since accomplishing his 1:45.4 world record mile) and Bella Bellini in winning races, among many others. The track has also seen good fortune in the past couple of years with horses who have shown up for their 2-year-old filly stakes, the Kentuckiana. In 2020 the Kentuckiana on the pace was won by a young filly named Test Of Faith, and in 2021, the Kentuckiana trot was won by another filly just getting her career started named Joviality.

Unlike a couple of its 3-year-old stakes such as the Carl Erskine and Monument Circle that drew top quality horses this year including King Of The North and Bythemissal in the days after the Breeders Crown, the track will be well positioned to offer the Haughton and Doherty as key run-ups in advance of the Breeders Crown.

“These two stakes will draw the attention of horses from all over North America, and beyond,” said Moore. “The types of breeding that these 2-year-olds will have will set the tone. And even more fortuitous is that since we’re having the Breeders Crown here too, it allows connections that think they may have Breeders Crown potential, to race here in advance for big money and at the same time see how they do over the Hoosier Park track.”

The addition of the two highly prestigious 2-year-old trotting stakes will only give further credence to the quality of stakes racing being built outside of traditional East-coast racing hotbeds.

“I don’t ever want to compare ourselves to anyone else, but I’ll say that we are very, very proud of the open stakes that we have here at Harrah’s Hoosier Park,” said Moore. “We had Bulldog Hanover here a couple of times last year. Bella Bellini put in one of the greatest performances I’ve ever seen in the Caesars Trotting Classic. And these are the types of horses we’re drawing here on a regular basis. Knock on wood, but we’re getting the top horses, owners, trainers, drivers, and hopefully we keep that momentum going and I really believe that these two stakes will only add to that. With these races specifically, with the Greenshoe offspring now being eligible, that’s going to add even more intrigue and luster to those races.

“I love our stakes season. We don’t really start our open stakes season until we get to the Dan Patch and after that it’s bam-bam-bam all the way through. We like putting on a show, and we like having the best horses here.”

Harrah’s Hoosier Park will have new opportunities to do those very things next year.