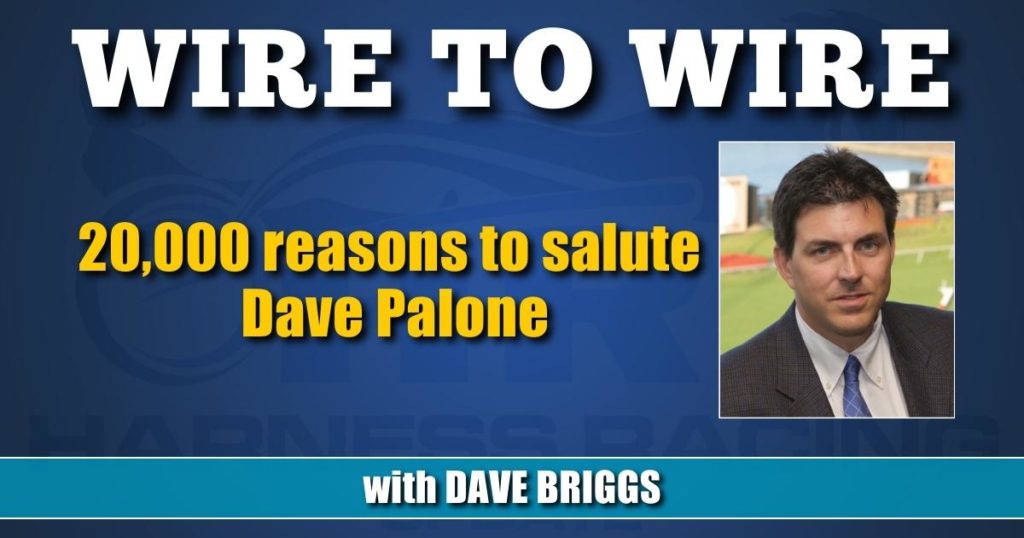 Assessing the sheer magnitude of the driver’s incredible 20,000-win milestone.

Malcolm Gladwell famously wrote that one needs 10,000 hours of practice to master something.

So, what does that make Dave Palone who recorded his eye-popping 20,000th career driving victory on Saturday at his home track, The Meadows near Pittsburgh?

Palone has already been a Hall of Famer for 12 years — and rightly so.

Considering Palone keeps pushing into unknown territory with gob-smacking statistics that are going to be awfully tough to match, his numbers are worthy of some deeper analysis.

Just stop and try to think of anything anyone has done more than 20,000 times.

And that’s just the victories. Palone has raced more than 77,000 times over his 40-year career, meaning his win percentage is north of 25 per cent while averaging about 500 wins a year.

Palone not only holds the all-time harness racing wins record by well over 3,000 victories on Germany’s Heinz Wewering, Palone has north of 9,000 more wins than the all-time leading jockey, Russell Baze, who retired in 2016 with 12,842 career triumphs.

To put it simply: When it comes to winning races, all the rest are currently 20,000 leagues under Palone.

Apart from matching the (alleged) number of women Wilt Chamberlain claims to have slept with, consider that in just wins alone, Palone has travelled:

• 80 per cent around the circumference of the earth (a complete trip is said to be about 24,850 miles)

• from the north to the south pole more than two times.

• from New York to Los Angeles more than seven times.

• the equivalent of swimming the English Channel about 1,000 times.

• the distance across Snake River Canyon about 80,000 times (Evel Knievel failed to do it once in a rocket ship).

Further, if each win was the equivalent of one day, Palone would have travelled nearly 55 years in time.

In short, it’s a phenomenal distance and total and accomplishment.

One that deserves a standing ovation from a crowd of 20,000.