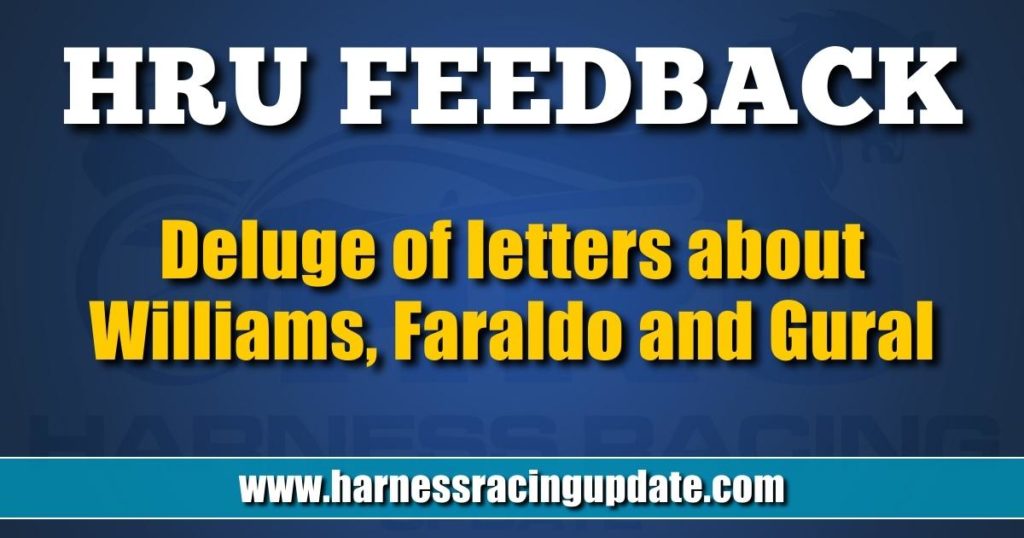 All within the industry are well aware of the long standing animosity of the USTA leadership duo of Joe Faraldo and Russell Williams toward Jeff Gural. This Russell Williams letter takes that personal vendetta to a new level, endangering the very industry the USTA is charged to protect. It is maliciously inspired, poorly thought out, intellectually dishonest, and a divisive attempt to add new fractures into an already divided industry.

Williams’ letter presents no supporting facts for its implied claim that Jeff Gural has engaged in selective enforcement of drug positives. Just as importantly, it neglects the fact that we, as an industry, really have no transparency with respect to possible selective enforcement on the part of state commissions or the USTA. The idea of enabling full transparency respecting all drug testing results is a good one, but it would require creation of an independent body solely authorized to ensure this transparency, and it would need to apply to state commission results no lee than to Mr. Gural’s. Certainly the USTA cannot act in this neutral capacity, as evidenced by the personal and biased nature of current leadership’s manner of dealing with industry matters.

The notion that Mr. Gural’s handling of the Adrienne Hall matter is somehow proof of Mr. Gural’s impropriety of bias is unfounded. If the New Jersey Racing Commission would ban her, then her situation would be sealed. We may not agree with Mr. Gural’s belief that allowing her to race will lead others to inform, or in the wisdom of allowing an admitted doper to continue competing at his tracks, but as long as state commissions do not ban her, it is a prerogative of ownership for Mr. Gural to act as he is. Industry response may move him to change his policy, but his position is based on his belief that allowing her to continue competing will lead to more disclosures from others believing their cooperation might induce leniency. The implied favoritism suggested by Williams is out of line.

Williams’ letter also exposes its hypocrisy and elitist approach in suggesting it is attempting to protect stakes owners expectations for a level playing field. The doping issue is no less pervasive and harmful in non-stakes races, which constitute the vast bulk of our races. Where is USTA concern for their effective supervision?

In closing, it is unbelievable that the USTA would specifically target Jeff Gural for selective enforcement of integrity issues when nowhere else in our industry is there any enforcement of integrity issues. Sadly, the USTA, Russell Williams, and Joe Faraldo have turned a complete blind eye to issues of integrity! Where it not for Jeff Gural’s “self-appointed” regulatory efforts, we, as an industry, honest trainers, and owners would be far worse off!

More thoughts on Williams and Faraldo

Several comments in regard to Paul Fontaine’s response (full story here) to Russell Williams’ letter stood out (full story here). The reference to Richard Bianca, who has been indicted and will likely be facing jail time, being a trainer of horses belonging to a person who has been at odds for years with Jeff Gural (whom we can safely assume is Joe Faraldo), grabbed my attention. As did Paul Fontaine’s mention of Rene Allard and his recent USTA registration of a foal despite his indictment and probable jail sentence.

Williams and Faraldo (full story here) have a nerve attacking Jeff Gural at any level while they have condoned the likes of Allard and Bianca, known rule breakers. Faraldo even employed the services of Bianca, a known cheater. Their nonsensical media letters about Mr. Gural and Adrianne Hall are laughable at best. Two people who stick their necks out to clean up a dreadfully filthy industry, to do what is in the best interest of the horses and the race people that are not breaking rules at every turn or flaunting the rules and the authorities, are the recipients of ridiculous remarks from two men abusing their positions of power. Adrienne Hall did wrong and admitted her mistakes. She has more than made up for those mistakes by collaborating with the FBI to expose so many others who would likely have gotten off scot free — as they have for so many years.

Where is the ire from Faraldo and Williams along with directors and members across the county regarding the names of so many trainers/owners on the list of Fishman’s clients? He sure as hell didn’t have a reputation for practicing proper veterinary medicine but was well known as a supplier of illegal enhancement concoctions. I was disappointed to see so many of those well-known names but certainly not surprised. His name and reputation in the industry was like honey to the bees. And yet Williams and Faraldo jump all over Gural and Hall. Adrienne will never be able to work in racing in the same capacity as she well knows. I wish her well in her future endeavours to clean up the cesspool that racing has become. As mentioned “they eat their own”. I’ve said for years that they ‘chew them up and spit them out’ and that applies to humans and horses. Faraldo and Williams need to go to be replaced by those who can put their personal animosities aside, act like adults with responsibilities to their membership, the industry and, most importantly, the horses. Their juvenile, diversionary tactics make them look like irresponsible fools.

Even more thoughts on Faraldo, Williams and Gural

After reading the published letters of Mr. Faraldo, Mr. Williams and Mr. Gural I had a sense of sadness for our sport and real concern for all of those hard working dedicated people who want and need our sport to survive and prosper. Having been involved with the breeding, raising, selling and occasionally racing this terrific breed of horses I have often wondered with such a great product to present to the public why we have all the attributes of an industry declining toward irrelevancy.

The answer may be the lack of a coordinated focused plan to rally our industry, interest and inspire outsiders and provoke curiosity about and eventual participation in the various aspects of our business. Meanwhile, our leaders engage in petty disputes that can only undermine our sports image. Without a clear charter the role of Industry leader on everything involving harness racing appears to have been assumed by default by the United States Trotting Association even though it is ostensibly a record keeping and pedigree registration organization.

Despite some suggestions in Mr. Faraldo’s letter that seem to trivialize the significance of the Department of Justice prosecutions, I am confident that every responsible person in our industry agrees that cheaters in our sport harm the betting public and endanger our horses. As every knowledgeable person knows, the Department of Justice’s recently filed Bill of Particulars represents a good faith statement of what the government believes they can prove and should remove among persons of good faith any doubt that the current system is a complete failure with regard to deterring cheating. Under these circumstances it is particularly concerning that the USTA and Mr. Faraldo through his recent letter have appeared to challenge the motives and impugn the integrity of Mr. Gural. Why would they choose this time to attack Mr. Gural when the validity of the Government prosecutions are being publicly confirmed by Guilty Pleas and Convictions and it is common knowledge that Mr. Gural’s actions and vigilance has played an important role in getting the Department of Justice involved in helping our industry to address an potentially industry destroying problem? It sends a disturbing message to our membership and might even encourage the cheaters to assume they have friends in high places. This simultaneous attack on the sole individual who seems to be willing to take definitive action to try and save our industry while trying to undo the only federal legislation ever to attempt to solve an issue everyone agrees is prevalent further undermines the message that our industry actually cares to stop the cheaters.

In consideration of Mr. Gural’s role in helping to focus the industry on the cheating he should be nominated for USTA Person of The Year or even Decade rather than the object of a public letter from the USTA asking that he, rather than the cheaters, be investigated.

HRU reports Adrienne Hall relinquishing her NJ license (full story here), apparently thinking that doing so relieved her of responsibility to appear before a mandated hearing with the NJ racing commission.

By all accounts Ms. Hall appears to be a responsible person caught up in a hell storm with more people to fall. So I have no interest in seeing her further disparaged. Let’s leave that for Jeff Gural who should have excluded her from the grounds based on her initial and pending testimony followed by an additional 60 day exclusion.

By taking no action, and actually defending her, she was put in an untenable position. What Ms. Hall is reported to have said; that is, what are they going to do when the other names surface, is more critical. Here is where Gural’s hyper-inflated legacy will be tested. Gural proudly owns his efforts to clean up racing. Shows up in court to bear witness to a man sentenced to years in prison, when questions mount as to whether others are equally guilty. It must be that when the dirt hits the fan all those muddied need to be held accountable. Gural cannot on the one hand fight for racing integrity and then on the other shield known culprits from punishment. Oakes, Pena and others were dealt the Gural wrath while others have gone unpunished or protected from being publicly implicated. Gural should be front and center with the U.S. attorney’s office to go full force in furthering its investigation. Don’t stop with the few lives destroyed while others continue to enjoy the fruits of their ill-gotten gains. It is, for example, unfathomable that Gural hasn’t grabbed his megaphone to push for an investigation of the driver(s) allegedly paid to not put forth a best effort (as alleged in the Fishman trial). The zeal and publicity for Gural’s justice can’t punish some and leave others unscathed. Mr. Gural started this pursuit. It’s on him to finish it.

I having been reading about the drag time for Meadowlands races and find the whole thing amusing and silly. There is no drag and there never was one. Think of the guy who turns his clock ahead a few minutes in order not to be late. He becomes conditioned to do things with his clock being ahead of time. Obviously, it’s just a mental thing. Now think of the Meadowlands race time as seven minutes after the time says zero. Once one knows that’s the real race time, it is no longer a drag, it’s the real post time and the bettor has the conditioned response to bet accordingly. Most wait until near post time and you know post time is seven minutes after it says zero.

The experiment to go when the clock said zero had to fail. Everyone was conditioned to bet seven minutes later. It’s been inbred to them. It would take a considerable time for them to become accustomed to race time being the real time and that would cost the Meadowlands a considerable amount of money waiting for the bettor to be acclimated. Once they all know that betting would go back to normal. So in the end it really makes no difference , just be consistent and the bettor will catch on.