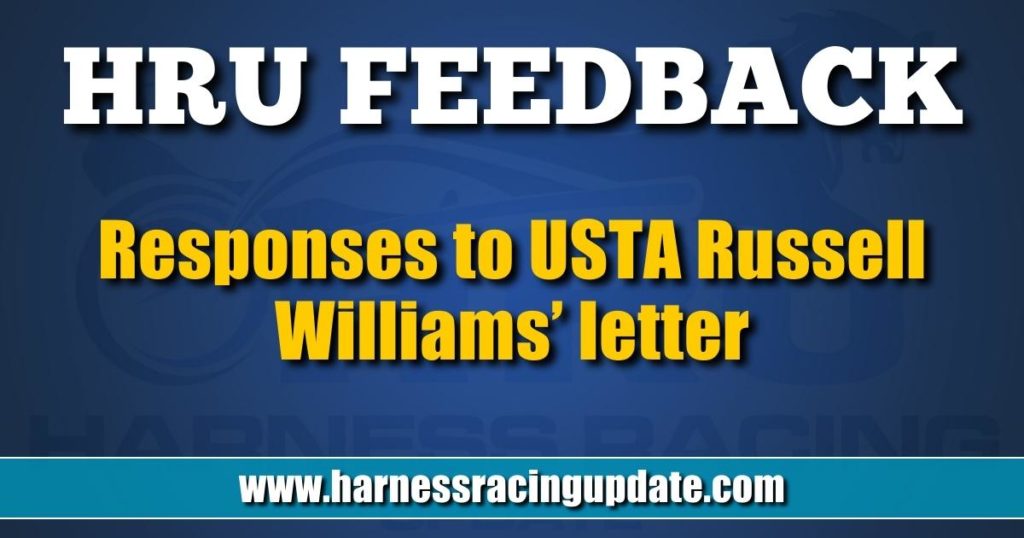 If harness racing wonders why there is a problem, this letter (from Russell Williams) (full story here) tells us what it is! Is the USTA concerned about the names of Fishman’s clients which lists big name trainers? Apparently not. Instead, they worry about Gural who is trying to clean it up. If you tell people See Something, Say Something, but then penalize the whistle blowers, then no one will say a thing. Start going after the bad guys USTA!

Thoughts on the USTA’s “latest diatribe”

The latest diatribe from the USTA president regarding filing complaints against Jeff Gural in three different racing jurisdictions (full story here) requires me to exclaim: “Are you kidding me?” No racetrack owner has done more for the integrity of the racing product at his track than Jeff Gural.

There are three heads at USTA. The chief executive officer, the president and the chairman. I’ve known Mike Tanner since I sat on the committee to hire him. He is fair minded, and this is not his doing, not by a long shot. The president is too wrapped up in his own dispute with many leading lights in our industry regarding the legislation passed by Congress, its pros and cons, and the ensuing court action.

So that leaves the one man who has had a running feud with Gural for many years to the point of being lord and master over the horsemen racing at the one track that everyone in the business knows to be the cesspool of harness racing. And all the while owning horses trained by Richard Banca who just about everyone in our business alleged to be a crook, and also has been indicted, facing a long prison term.

By the way, is everyone aware that USTA recently accepted the registration of a horse owned by none other than Rene Allard? Yes, the same Allard who is also indicted and facing prison. Last I knew, to register a horse in your name or in the name of a stable of which you are the corresponding officer requires membership. Good luck explaining that little tidbit. I’m waiting!

Interesting, also, is the timing of this little venture. Just BEFORE all the directors are scheduled to have their annual meeting. I guess locking out any open discussion on the floor of the directors’ meeting is the latest fad.

Having served as a USTA director for 30 years, seven of which I was chairman, I can assure you none of this foolishness would have occurred while I and most of my fellow directors insisted on open and frank discussion and deliberation on all issues, particularly those regarding integrity in our sport.

I hope that at this coming meeting, sanity prevails and the directors insist on their right to an open roll call vote to rescind this foolishness that reflects very badly on the USTA and particularly its leadership.

Harness racing is like the Democrats: they eat their own. Al Franken comes to mind. Before anybody jumps on me, I’m fully aware of the catastrophic dangers of “doping” a defenseless horse. I was in the business from the 1960s to the early 1970s. Then it was a similar scenario, people with a small-to-medium sized stable, stocked with cheap claimers, and maybe a condition racehorse or two. They were decent trainers and drivers, simply working hard seven days a week to pay the bills, feed the family (that sometimes lived in tack rooms) Talk about rough times, geez. And all the while, the management hierarchy only talked about the big stables and giving the named drivers the mounts.

Meanwhile, the smaller stables get forced into the untenable position of, yes, doing regrettable actions to survive. Desperate people do desperate things. So instead of vilifying them, rehabilitate them with help, such as a benevolence fund to get through the rough spots. Invest in your people and incentivize them to put out the best product. Remember, the racing secretary would not have enough horses to fill his overnight racing card without the smaller stables. They help make the show.