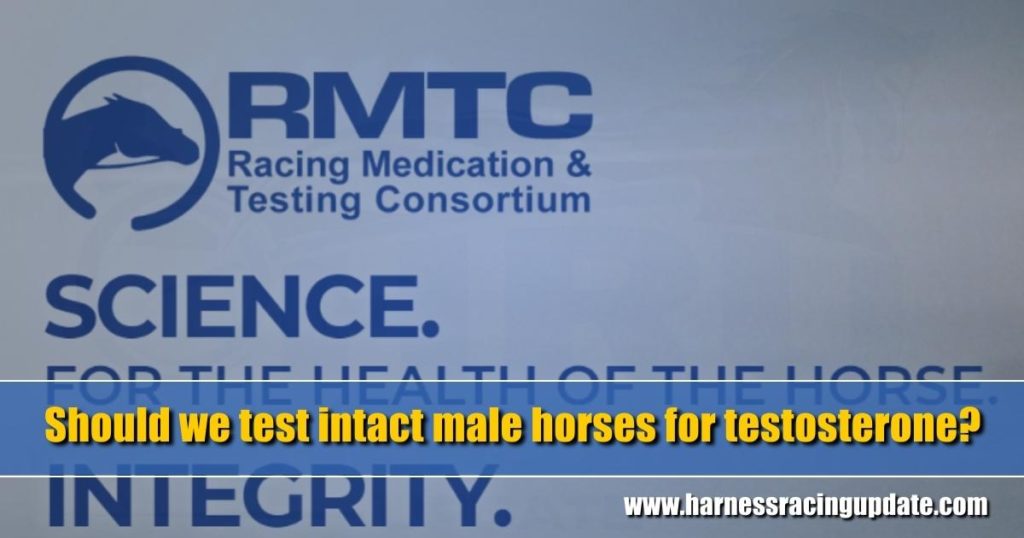 Should we test intact male horses for testosterone?

Should racing commissions test intact male horses for testosterone? The Racing Medication and Testing Consortium (RMTC) doesn’t think it should.

The Paulick Report story also suggested Pennsylvania may be one of the few regions that “has a threshold level for testosterone for intact male horses.”

Perfect Sting’s trainer Joe Holloway told HRU he did not give Perfect Sting testosterone and, apart from requesting the split sample test as soon as he was informed of the positive — approximately 10 days after the race — he also opted to have a hair follicle test done to determine if the studdy pacer had naturally high levels of testosterone.

“We pulled hair follicles on Dr. Tobin’s recommendation and he gave me the name of a guy in England who’s at the forefront in that field. We sent the hair to them and that’s not back yet,” Holloway said Tuesday (Jan. 4).

“We haven’t heard from them. Dr. Tobin has emailed the guy. My vet has emailed the guy. We’ve called the guy. Dr. Tobin said, ‘Maybe I shouldn’t have recommended him,’ but he’s the best and he’s just way backed up. So, Dr. Tobin does get him on the phone and he says that they’ve been so jammed up with Covid, ‘Do you still want them to do the test?’ That week, the split sample came back in December and it was high and we’re going to have to have a hearing. So, we say, ‘Yes, we really need (the hair follicle) results.’ He said, ‘I’ll move it to the front of the line.’”

Holloway stressed he doesn’t know how it relates to testosterone levels, but Perfect Sting has long been, “a handful in the paddock… Then, when we test-bred him, he was off the charts. He’s pretty virile.”

Whether that led to a high testosterone level or something else is yet to be determined by the Pennsylvania State Horse Racing Commission when the appeal of Holloway’s 15-day suspension and $500 fine is heard.