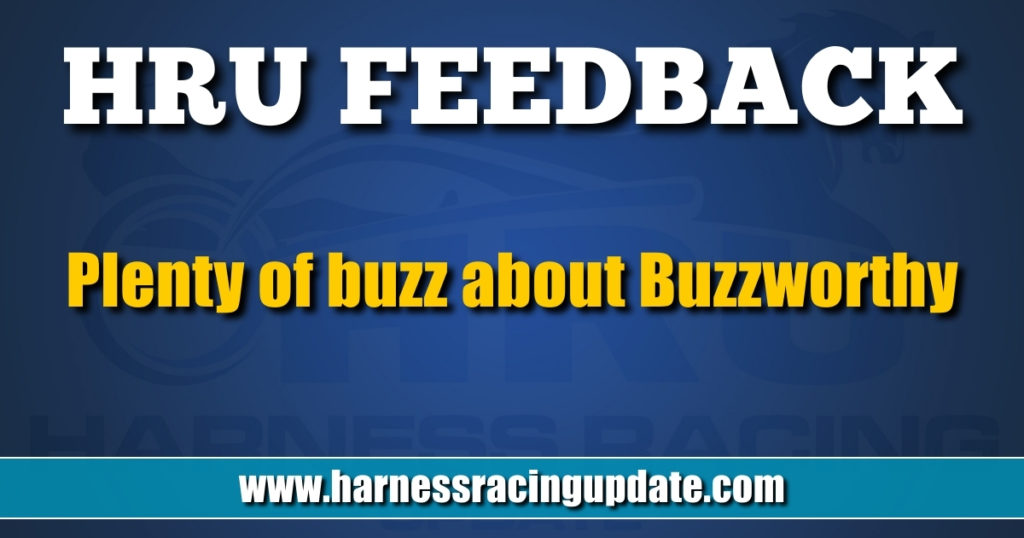 As a very casual observer/bettor, but big fan, of harness racing since 1975 when I was 18 and made my first bet at Monticello, I always wondered why betting was allowed until the horses reached almost the first turn. I remember going to Goshen when they still had betting, and my friend would call out to me what number to bet, and we weren’t the only ones (you couldn’t see the track from the betting windows, but could from the nearby stands).

It always seemed to me to have a simple fix: Ring the bell (stop the betting) when the horses reach the recall pole. I missed when it happened, but it seems to me there isn’t even a recall pole now. Horses can break behind the gate at the head of the stretch and the bettor is “out of luck” Also, with remote betting prevalent, the need to stop betting sooner and end bell betting seems even more important. So why don’t tracks implement this?

Very unsatisfying story in today’s Harness Racing Update about that suspicious exacta the other night at Northfield (full story here). If you’re going to do a story, do it right. Why weren’t the trainers and drivers of the pertinent horses interviewed? Why weren’t Northfield Park officials interviewed? Besides that, we are told “at one wagering hub, they apparently pay for a faster video feed so there is little or no time lag on the video feed”—which allows some bettors to see who is leaving, not leaving or breaking stride just before the start. Really? Why not identify that “wagering hub” and tell us how much that faster feed costs? Is it really true, as the story suggests, that some video feeds are routinely 45 seconds behind reality? In journalism, when you do a lazy job it’s often better if you don’t address the subject at all. This is one of those cases.

Integrity and fairness have left the building

RE: Super short Exacta payout at Northfield leads to questions

Never have we been let down more by those charged with insuring the racing game’s integrity than NOW! When you read the words of DRF Harness’s Matt Rose you can begin to see the smoke-screen being put up in front of you and you can now see the meaning of the phrase “Don’t Rock The Boat. While it has been some years since the David Hawk scandal or the similar race and results when Jim Pantaleano and his barn were removed from Northfield’s grounds following a similar race, sometimes reality hits you right in the ass.

Matt Rose’s comments are perhaps the most troubling due to the fact that he has NO investigatory authority or Gaming Commission powers. Apparently Matt thinks it’s still 1970 and we, the uneducated public, will believe anything we are told. Sort of like the Russian Collusion promised but never delivered. The Tote system used today is capable of telling us where tickets were bought, the number of winning combinations on each ticket, whether numbers were left off the tickets and even SS numbers perhaps if the dollar totals were high enough. Couple the available Tote information with the matching video covering every sales point and we will have the who, what, when and why. Sorry Matt this is 2021, the majority of us have gone to college and we’re not buying BS anymore, technology is now on our side. Keep in mind that we are talking about professional drivers and they are better at what they do than we are at detecting it.

Every major track has a Gamming Official at their location and judges for infractions and oversite, so what are they saying? Wouldn’t the appropriate and prudent thing be to put a hold on the payouts until an initial investigation has been concluded. Let’s compare this situation to NASCAR for the sake of discussion. The winning car goes off at say 7-1. At the post-race inspection the gas tank is found to be over the limit or another of the race’s drivers puts in a complaint about dirty driving by the race winner. Do the bookies pay out the 7-1 on the winning car immediately or wait till the investigation is concluded? Why would the customer dollars held up by NASCAR be any different than the harness racing customer dollars? The answer being pitched to us is “Because it’s always been done this way.”

With technology today the race, video and tote information is available with a few keystrokes. Of course, this assumes the investigatory programming was done up front and the Gamming Commission’s representative has been properly trained. Both the state and the track are taking dollars from the betting public out of the betting pools shouldn’t we expect both quicker and better.

All in all this is another black eye for our sport. Let’s compare other sports. In American football there is a laser line across the first down line and the end zone, in baseball there is a laser box shown around the plate strike zone. So how has our oversite helped us? My guess is NOT MUCH. All in all I believe it’s time for a federal program and oversite. Enough is enough. Get the adults in the room.

I have indicated throughout my career the importance of racetrack owners implementing their court proven “Right of Exclusion.” This policy supplants the historically non-existent effort by our regulators to implement the rules regarding fraud and misrepresentation thus allowing trainers and owners to circumvent major suspensions by simply naming a beard (fraudulent) trainer or owner on their entries.

With some exceptions this has been the norm for decades until Jeff Gural attempting to address our poor regulation and public perception cut the mile for all racetrack owners to apply their “Right of Exclusion.”

The “Right of Exclusion” allows privately owned racetracks to deny a trainer, his agents and partners the right to participate if it is deemed not to be in the facilities best business interest.

Some believe utilizing this policy creates an adversarial relationship with our regulating agencies when it is simply a matter of the racetrack exercising a right that commissions do not have in their tack room.

One would expect legitimate trainers and owners to heartly support this policy as they regularly express their indignation when suspended individuals enter horses listing a false trainer and witness these horses ship in trailers with the suspended individuals name emblazoned on the side. Adding to this industry crisis are the owners that engage these unethical trainers. These corrupt issues are driving legitimate owners and trainers out of the business.

The “Right of Exclusion” is an overt display that assuredly informs our participants and patrons that integrity is a priority.

I’m sure everyone reading this article has some knowledge of the suspicious medication issues surrounding 2018 and 2021 Kentucky Derbies.

The 2018 Triple Crown winner Justify tested positive in the Santa Anita Derby. Long after the unprecedented surreptitious California Horse Racing Board (CHRB) investigation the drug violation was declared an environmental poisoning, a determination applied to medication irregularities for this trainer in the past.

The scandal did not come to light for over a year until a New York Times investigation unearthed the failure of the CHRB to follow equine drug positive investigative regulations and protocols. The Washington Post via documents acquired through a freedom of information request have detailed the scope of corrupt CHRB actions enabling an ineligible horse to enter and win the Kentucky Derby.

In this year`s Kentucky Derby, Medina Spirit`s betamethasone positive is the second incident involving illicit medication issues in the Kentucky Derby since 2018, both under the care and supervision of the same trainer. These are not the only medication violations on Mr. Baffert`s resume.

These incidents exponentially support the need for racetracks to equitably apply house rules to protect the reputation of their business and our sport. The “Right of Exclusion” is a prerequisite for horse racing to get back on track and thrive along with the Horse Racing Integrity and Safety Authority.

Churchill Downs, the New York Racing Association and Jeff Gural have the distinction of boldly applying the “Right of Exclusion” to protect and enhance their public perception. These actions fall in line with NYRA`s mission statement “Meeting the highest standards in thoroughbred racing and equine safety.”

This case has national as well global implications.

Mr. Baffert appealed so once again the “Right of Exclusion” is tested. The court favored the motion citing that a suspension without a hearing was unconstitutional. Participation at any privately owned racetrack is a “privilege” not a right. A state license provides a right to participate in a specific jurisdiction. The Right of Exclusion is not a suspension but a firm denial of the “privilege” to participate.

NYRA’s position held that Mr. Baffert’s denial to participate was necessary to protect their reputation and fill the void created by our regulator’s ineffective and questionable performance. Individuals that are served with major suspensions in most instances appeal get right back on the track and drag out the process as long as possible damaging our public perception along the way.

Additionally, these offenders when serving their suspensions list beard/fraudulent trainers/owners in name only never missing a purse check.

A key factor influencing Mr. Baffert’s favorable appeal decision… the New York Racing Association is a New York State non-profit. NYRA is not a privately held facility hence does not have the power to implement the “Right of Exclusion.”

The Meadowlands as a privately owned facility is not encumbered by the same limitation hence the “Right of Exclusion” is alive and well in New Jersey.

Rene Allard was indicted along with other prominent thoroughbred trainers for serious illicit integrity violations. Jeff Gural citing The Meadowlands “Right of Exclusion” has denied Mr. Allard, his owners, and agents the right to participate. These stables filed a lawsuit citing a conspiracy to create a competitive advantage by denying their horses the right to participate at Tioga Downs, Vernon Downs, and The Meadowlands… an absurd accusation. The fact that these stables allegedly have horses under the care of Rene Allard validates Mr. Gural`s administration of the Meadowlands “Right of Exclusion.”