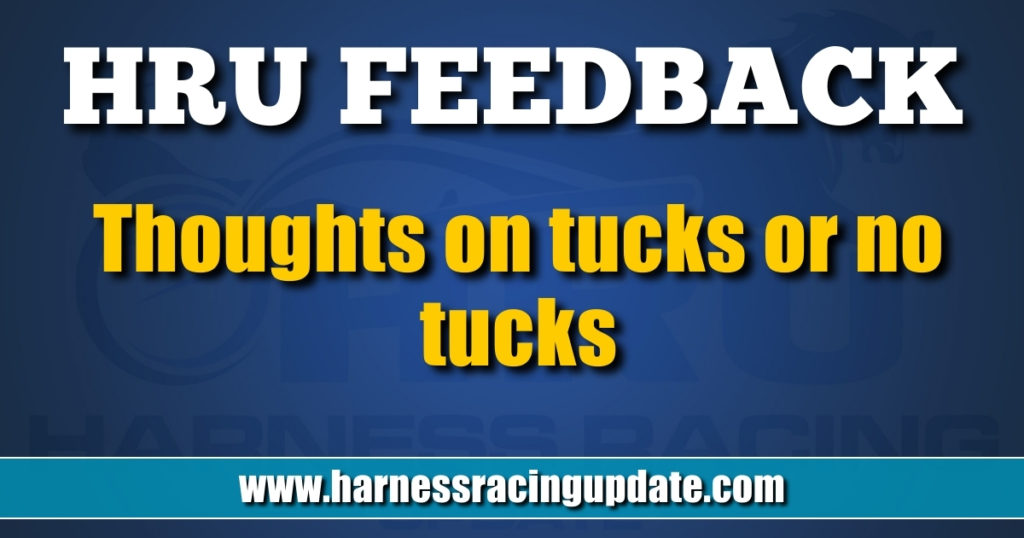 I’m a 50-year-old harness fan. Nothing was better than half-mile harness racing. I cut my teeth at Freehold , Yonkers and Roosevelt. Tucks have never been allowed. The judges now a days turn their heads. Two things have ruined harness racing in my opinion. Constant tucks and the miserable passing lane. Force the outside horses to go to the top and battle. If the leader wants to retake, fine but make these drivers use their horses. What’s worse than Yonkers now? Slow first half miles and fast 2nd’s it’s infuriating. The horse in the two-hole had to be out before 3/4 or get locked in. That was great racing not this passing lane from hell. Imo, two major items ruined harness racing I hardly ever wager anymore on the constant favorite train.

We must differentiate between a courtesy tuck and normal racing tuck

We need to differentiate between a courtesy tuck and a normal racing tuck. It really isn’t difficult. The crime is when a driver floats out into space and sits outside of a hole that does not exist. If the driver keeping the hole close, then — and only then — backs up to let the floater tuck in, both drivers should be suspended.

Tucks or no Tucks?

I will base my opinion on the process that the judges will use:

There was a clamor for instant replay in major sports like football, basketball and baseball, until the method was adapted. Once replay was allowed, the concern then shifted to how the flow of the game got interrupted and delayed as plays and challenges were reviewed.

We can see how some race results are affected now by overly long reviews by the officials. Install a “tuck rule” and these delays may magnify, making betters bored and possibly cynical of the decisions. Who wants to watch endless replays from various angles over and over before deciding on an official placing? Can we be assured after a delay that the rule will be uniformly applied by track judges throughout our sport?

Since retirement I spend as much time at the track as possible (those that are open). I am including simulcasts. As an owner of two pacers in the early ‘80s (Noble Ernie, and Ms Amy D), I hated giving a tuck and told the driver that and still do. The only thing I hate more is the nonsense at 5/8 tracks where only five or six are actually on the gate when it opens, I keep waiting to hear, “tighten it up gentleman” as I used to hear at Brandywine and Liberty Bell. Harness racing’s integrity suffers when a driver allows someone in for free, as perception is everything.

If you never allow tucks, there will be fewer leavers. This will lead to horses left alone on the front and easy winners. The outside horses have a better chance leaving for a tuck then closing from the back. If there is a no tuck rule, they won’t leave very often.