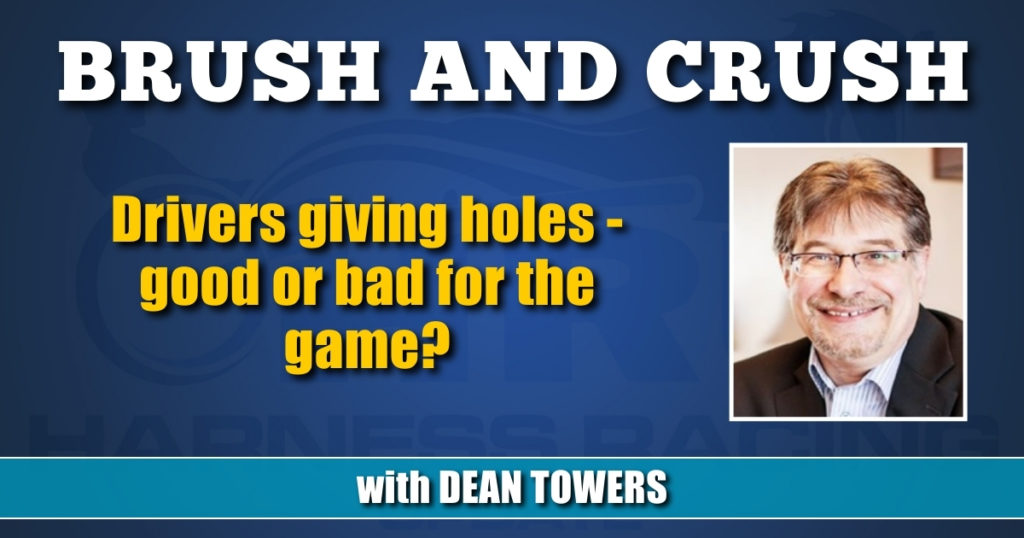 Drivers giving holes — good or bad for the game?

There are a lot of contentious issues about how harness racing is presented and raced, and the argument regarding the giving or not giving of tucks (especially on the first turn) is certainly one of them.

There appears to be a couple of schools of thought on this: 1. Closing holes, as per the current rules, creates more contentious racing and a better product, especially by encouraging closers and 2. For a proper race flow and to allow drivers to use strategy, tucks need to be available.

I asked the venerable John Campbell via email about his thoughts on the state of the game regarding tucks or no tucks, and he was increasingly wary about the speed favoring nature of the sport.

“As an industry we have to make every effort to make our races as entertaining to watch and as attractive to bet on as possible. I think almost everyone agrees that this is accomplished when the closers are brought into play,” Campbell wrote.

“The rules that are written and in place [rules not allowing the giving of holes or tucks] should be enforced on a consistent basis. If there is concerted pushback from the fans and horseplayers on a certain rule or the calls pertaining to that rule the tracks and Commissions should then go through the proper channels and either modify or change the rule.

“We must be more attentive to our customers as we move forward.”

With that, I thought we’d ask a few of harness racing’s regular customers this exact question.

What are their thoughts on drivers giving (or not giving) holes?

Greg Reinhart (public handicapper): “I can see both sides of the argument on drivers being allowed tuck in rather than getting left out, and it would be intriguing if it wasn’t allowed to see how drivers adjusted and how race shape changed. However, for me, if I pick a horse that’s offering a square price, and the driver on my horse opens a hole that allows him to follow a contender that then results in at least getting a chance at a victory, then I think that’s a sound strategy on his part. The same goes for letting in a longshot that a driver wants to get out of the way and then re-move around. So, with that said, I would not be in favor of rules being significantly altered to not give drivers those type of options.”

Les Stark (professional horseplayer): “The subject of tucks, whether strategic or otherwise, yields opinions from both sides of the coin. Drivers are adamant that they need to be able to develop a game plan which may include allowing a live horse in front of them to follow. Others, hoping for more of a flow which would allow more horses to enter contention, insist that holes must be closed. Many, myself included, would like the speed/favorite barrage to be slowed down. There is no easy answer for this complicated issue. In my view, I believe the closing of holes would lead to more of a contested pace, and allow horses which get away in the back to enter contention. One only needs to look at races from the ‘90s to see how this could be accomplished. While the changes in bikes, the breed etc, have made horses able to carry speed longer, it’s worth a shot to try and create a better environment for closers.”

Ryan Willis (customer): “I think it [the current system of not being draconian on tucks] works out pretty evenly overall – for customer and driver. The exception, however, would be the guys that don’t drive regularly; they are never finding that same courtesy tuck everyone else is. It would be interesting to see what would happen if judges disallowed giving holes completely. I think I would hate the chaos it would cause, but some that want extra randomness in the races may really enjoy it. In fact, we see these types of races every week in the amateur races – the only two holes are at the front and the back. For every day racing, I would be scared about the guy landing 3rd or 4th not being allowed to give a hole and the outside horses just sitting beside your bet for an eternity.”

Brett Sturman (horseplayer, Harness Racing Update): “I don’t think that allowing holes is generally good for the product. In some cases where there truly is a direct strategy involved, such as making a hole so that a horse can then immediately have clearance to make a quarter move to the front, is one thing, but most times that isn’t the case. People can characterize the holes however they want, but the perception is awful. Plus, it stifles the flow of the races and anyone can see it by comparing any random race today to a race of 20 years ago. I do agree that with many others that the breed has changed and that horses carry their speed more, but the lack of flow in races only compounds that issue.”

Garnet Barnsdale (public handicapper): “I don’t mind holes being given in the first 1/8th or 3/16th of a mile when horses are sorting themselves out and looking to get positioned. I don’t think forcing drivers to close every hole immediately after the start would improve the product. The sport is already too speed-favoring, and, having horses left out there that will never be able to clear is likely to only help the leader. I don’t like the optics of drivers leaning way back to give a hole on the backstretch and the danger in doing it at that point of the race is others may be on the move and leave the hole-giver locked in. If you haven’t found a hole by the time they reach the 1/4, you should be out of luck at that point.”

From our unscientific sample, the conclusion seems to be that closing more holes would likely bring more back markers into play, but no one appears to want to see the wild west, with every hole closed like an amateur race.

Perhaps the judges being extra vigilant when it comes to “courtesy tucks” versus “strategic tucks” might help satisfy our group? Or perhaps we need a lot more discussion on this polarizing topic.

If you have an opinion on tucks versus no tucks, please share it with us at editor@harnessracingupdate.com and we’ll publish your thoughts next week in the feedback section.