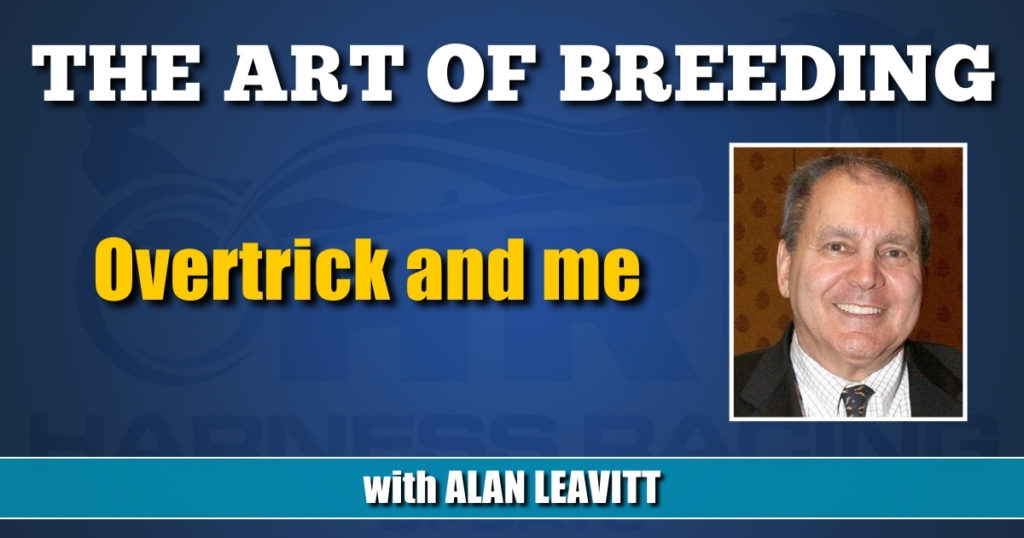 The first part of this story can be read here.

Overtrick was a 2-year-old in 1962, and Johnny Patterson had been hired as the Buck’s private trainer after John Chapman had gone out on his own after breaking Overtrick when he was still a yearling.

The first early 2-year-old stake that year was won by Majestic Hanover, a high-priced Adios yearling trained by Stanley Dancer. But Majestic Hanover’s season was cut short by a cracked bone in his next start, and from then on it was all Overtrick. There weren’t a lot of 2-year-old stakes in those days, but Overtrick won them all. His best performance came in his last start at Lexington. He made a break at the start, recovered, and then went on to circle the field and win comfortably. After the race, Patterson said, “I know Mr. and Mrs. Buck like those silver trophies, which is why I pushed my colt back into the race after that break. And it paid off.”

Patterson, by the way, had a great sense of humor. Lyndon Johnson was the president during Overtrick’s years, and he was known as LBJ. Leonard Buck’s initials were LJB, which is how Patterson often referred to him.

While Overtrick was clinching his title as champion 2-year-old of 1962, another 2-year-old, Meadow Skipper, was finally eking out a 2:00 record in an overnight in California. In those days, the race meeting in the fall in California was de rigueur for the major stables. Their card was topped by a big 3-year-old pacing stake and a big purse, for its day, for free-for-allers.

Meadow Skipper at 2 was trained and driven by Delvin Miller for Hugh Grant, one of his major owners. It’s worth mentioning again that Hugh Grant’s generosity made a college education possible for many deserving young people whose parents could not afford their tuition fees. One of the most deserving was Ellen Harvey, the daughter of Harry Harvey, who managed Meadowlands Farm for Delvin. Also, please forgive the repetition, but I’m proud to say again that Ellen is one of my most cherished friends, and one of the finest people I’ve been privileged to know.

In the spring of ’64, Overtrick came out swinging, but he was suddenly faced with a serious rival in Meadow Skipper, who was a different and much more dangerous version of his two-year-old self.

That came about because of a change in ownership and trainer. During the ‘60s and the following decades, Norman Woolworth was one of the major players in our sport. He and his trainer, Earle Avery, were always on the lookout for a promising prospect that they felt had the potential for further development. Woolworth raced under the nom de course Clearview Stables, and he was a major competitor on the Grand Circuit. Every year he and Avery would buy one Adios yearling, which is how they got world champion Muncy Hanover, who finished 1-2-2 to Bullet Hanover in the Little Brown Jug.

Avery saw something he liked about Meadow Skipper, so Norman bought him just as the 3-year-old season was beginning. The price was reported to be $82,000, and money was never better spent in the horse biz.

Avery made one change in Meadow Skipper’s rigging, switching from leather hobbles to the new plastic ones. Now, Delvin Miller was a truly great horseman, and it’s entirely possible that Meadow Skipper would have gone on to be equally successful for him. But Miller was also a seller, and at the time regarded the colt as expendable for such a high price as it was then.

In any case, Overtrick and Meadow Skipper waged some incredible battles as 3 year olds. Overtrick beat Meadow Skipper in the Little Brown Jug and the Messenger, while Skipper whipped him in the Cane. Interestingly enough, there was another colt who could go with both of these two. That was Country Don, who had been bred by Vernon Dancer, from his foundation mare, Miss Norah.

Country Don took a record at 3 of 1:57.4, and earned $234,149, both more than respectable at the time. He also had the distinction of finishing in front of Overtrick on three separate occasions. He was owned in Canada, and the story was that when he changed hands at 2, his new owner counted out $32,000 in cash on the hood of his car. As I recall, Ron Feagan trained and drove him, and he was a good third in both the Jug and the Messenger.

Overtrick came back at 4, but he made only a few starts because of lameness. Meadow Skipper also came back, and he held his own both at 4 and 5 against a tough bunch of free-for-all pacers. By then, Norman and David Johnston had bought Stone Creek, which had been a celebrated thoroughbred farm under the ownership of John Hertz, of Hertz Rental Cars. Hertz won two Kentucky Derbies with Reigh Count and then his son, Count Fleet, who was supposedly galloped into championship form along the Stoner creek.

Meadow Skipper was retired to the stud at Stoner Creek as a 6-year-old, where he attracted little notice from outside breeders. To show how prescient this kid was, Norman told me that he was syndicating Skipper, and I could have a share with the proviso that I could pay for it whenever I felt like it. I was smart enough to politely turn him down. Very smart, indeed.

But as we say in the detective trade, back to the Overtrick caper. Mrs. Buck sat quietly on Overtrick through the rest of ’64 until the Red Mile fall meeting. There she announced that Overtrick was for sale for $400,000.

There were no immediate takers, although there was one very disgruntled breeder in the form of Lawrence Sheppard. Shep was under the impression that Overtrick would be standing at Hanover under a lease, as so many other top horses had, with no money changing hands. At that point, he thought Mrs. Buck would soon come to her senses and Overtrick would be arriving at the Shoe Farms any day now.

Instead, Mrs. Buck sent out a telegram to whom she considered major breeders in the business, telling them that Overtrick was for sale at the newly-enriched price of $450,000.

In point of fact, Mrs. Buck couldn’t come up with 10 names she considered to be the top dogs, so to fill out her list, she included me.

I was gobsmacked when my telegram arrived. While I found it immensely flattering, it had no actual significance. My chances of coming up with that amount of money were only slightly better than the odds for me being tapped for the forthcoming mission to the moon. Actually, the odds were probably even.

Norman Woolworth also got Mrs. Buck’s telegram. In those days we were close. I had stood Muncy Hanover for him at Lana Lobell, although unfortunately we lost him to colic after he sired only one crop.

He called me, and said: “Why don’t you syndicate Overtrick? I think you could do it.”

“I don’t know anything about syndicating,” I said, “And besides, nobody knows who I am.”

“Well,” Woolworth said, “Mrs. Buck knew who you are. That’s a good start.”

Woolworth not only encouraged me over the phone, he told me to meet him in the lobby of The Metropolitan Opera House at 7:30 that evening, where he’d give me copies of the syndicate agreements for Trader Horn and Demon Hanover. As I recall, Traviata was the opera playing that night.

Working from those agreements I cobbled together the Overtrick syndicate agreement. Fortunately Delvin Miller heard what I was trying to do, and he gave me invaluable help. That was the first time, but not the last, when that great man came to my rescue out of the goodness of his heart, and my debt to him is still as strong as it ever was, only now it’s to his memory.

Between Woolworth and Miller, I put together an Overtrick syndicate, and the horse took off. I set his fee at $2,000, and it turned out to be irresistible to a lot of mare owners. In a matter of weeks, Overtrick was overbooked, and suddenly I was someone in the horse breeding business, with the hot pacing stallion, and for better or worse, that’s where I’ve been ever since.