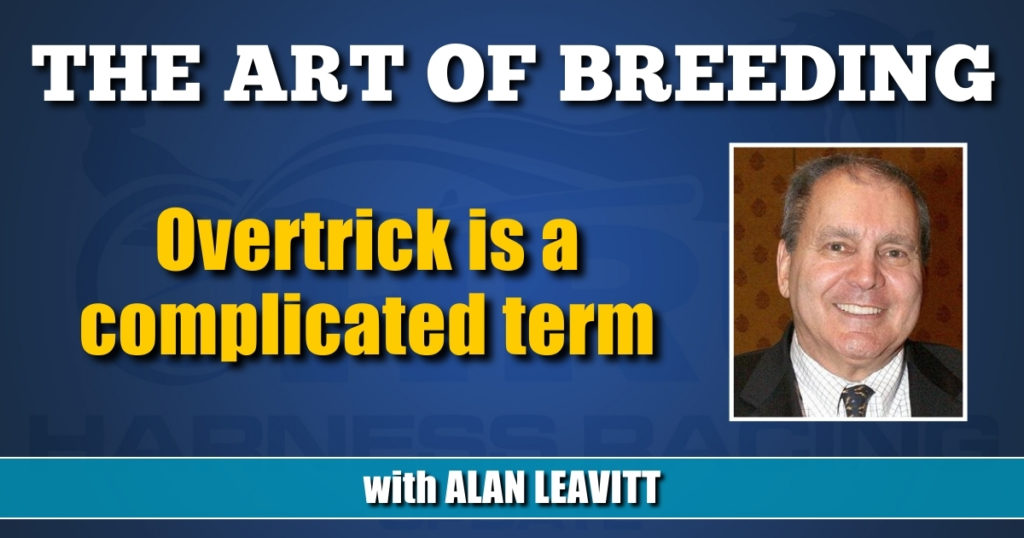 Overtrick is a complicated term

An overtrick is a bridge term so complicated that I can’t begin to understand it. By bridge, that is a reference to the card game, not to the other game that was so popular during the Great Depression. But with a capital O, Overtrick is also the name of the great pacer who played a key role in this kid’s life, among numerous others. He also was the racing rival to Meadow Skipper, of which more shortly.

Like every good story, Overtrick’s was full of twists and turns, narrow escapes, and occasional smiles from God.

Overtrick’s story begins in 1951. That was the year that his sire, Solicitor, and Solicitor’s stablemate, Tar Heel, were offered for sale at Harrisburg. They were part of the dispersal of the W.N. Reynolds Estate. Reynolds, of tobacco fame, was a great supporter of harness racing, and with his trainer, Delvin Miller, had raced a great stable of horses.

The two highlights of the Reynold’s dispersal were the 3-year-old pacing colts, Solicitor and Tar Heel. They had just finished 1-2 in the Little Brown Jug, with Tar Heel the winner. Both colts were gilt-edged stallion prospects. Lawrence Shepherd, the founder of the Hanover Shoe Farms in its present form, couldn’t decide which horse would make the best sire, so he went up to Harrisburg and bought both of them. Shep gave $125,000 for Solicitor and $130,000 for Tar Heel, record prices at the time.

Both colts, by now 4-year-olds, were raced back at 4, and then retired to the stud. Tar Heel stood at the Shoe Farms, and Solicitor went to Bill Murray’s Bonnie Brae Farm in Ohio. Tar Heel went on to be a great sire for Hanover, while Solicitor did nothing of particular note in the wilds of Ohio. But for reasons unknown to me, Mr. Shepherd and Jim Harrison, who was running the Shoe Farms as Shep’s Assistant to the president, finally brought Solicitor back to Hanover, where he stood for the 1959 season for $500.

At this point, enter this kid, stage left. A brash, Jewish young guy, wildly ambitious, with a carefully cultivated relationship with Lawrence Shepherd is the most charitable self-description I can come up with.

It was early July of ’59 that Jim Harrison called and said Mr. Shepherd wanted to talk to me. I immediately appeared, and Mr. Shepherd said, in words I well remember, as follows: “You need to stand a stallion at that farm of yours. I’ll sell you Solicitor for $25,000, $5,000 a year for five years, no interest. When can you pick him up?”

At this point Jim Harrison added what turned out to be the most important point: “Don’t forget, we just stood the horse here at Hanover this past breeding season. That means he’s got a crop coming from the best mares he’s ever been bred to.”

One of those mares was Overbid, a great bred young mare owned by Helen Buck, aka Mrs. Leonard J. Buck, of African diamond fame. Blood diamonds maybe, but in those days a diamond was a diamond, period, paragraph.

The Bucks were big operators in harness racing, with a private stable and Tom Murphy, the Wizard of the Reins, as their advisor. Murphy had been a great standardbred trainer, then switched to runners and in two years trained a Derby winner, and then went to Wall St. and made a fortune. His son, Thomas, also went into harness racing as an owner, and had the champion pacer Laverne Hanover, but that’s a story for another time.

The Bucks were big buyers at the yearling sales, and in appreciation of their business, Hanover offered Mrs. Buck a free breeding to Solicitor in ’59, his one year at Hanover. This was not exactly a gift of rubies and pearls, but Mrs. Buck took it, and bred her mare, Overbid to Solicitor. Overbid was by Hal Dale, and out of one of the best maternal pacing families in the book, with four consecutive 2:00-producing dams. Not overwhelming today, but then it was the best there was.

The result of this free breeding mating was a bay colt, foaled in 1960, named Overtrick. As you can guess, the Bucks were avid bridge players. The Bucks had their own training place in Georgia, and their private trainer at the time was Johnny Chapman. Overtrick was raised at Hanover, and then in the early fall of ’61, Chappy broke him.

Up until then, Overtrick didn’t have too much to recommend him as a racing prospect. In fact, early in the summer of his yearling year he was involved in a shipping mix-up with a well-bred filly by Star’s Pride, then the top trotting sire. Overtrick was supposed to be shipped to the Buck’s place in Georgia, and the Star’s Pride filly was to go to Jim Camp’s Almahurst Farm, in Lexington, KY. Instead Overtrick wound up in Kentucky and the filly was delivered to Georgia.

Jim Camp called Helen Buck when he was informed of the mix-up.

On the surface, this would have been great for Mrs. Buck. The Star’s Pride filly was probably worth three times more than a Solicitor colt. But Mrs. Buck wasn’t interested in swapping, so Overtrick remained hers, even though nine out of 10 people would have gladly made the exchange.

But even though she hung on to her colt then, somehow or other Overtrick wound up consigned to the Harrisburg yearling sale. By then Chappy had been sitting behind Overtrick for more than a month, and the day before he was to be shipped to Harrisburg, he called Mrs. Buck. He told her that he’d seen enough of her colt to know he was something special, and if he went through the sale, he would buy him. At this point, he had given the Bucks notice he was giving up their job and going back out on his own.

If Overtrick had been loaded onto the van the next day, he would have been bought for cheap by Johnny Chapman, and then shipped to his barn at Buffalo, where he was opening a public stable. Two weeks to the day after the Harrisburg yearling sale was over, Chappy’s barn burned, and every horse in it perished.

Obviously, Mrs. Buck cancelled Overtrick’s shipping and pulled him out of the sale. I still somewhere have the sales catalog in which a bay yearling colt named Overtrick is listed for sale. And this is only the start of the story of this amazing horse, who, among other things, happened to change this kid’s life.