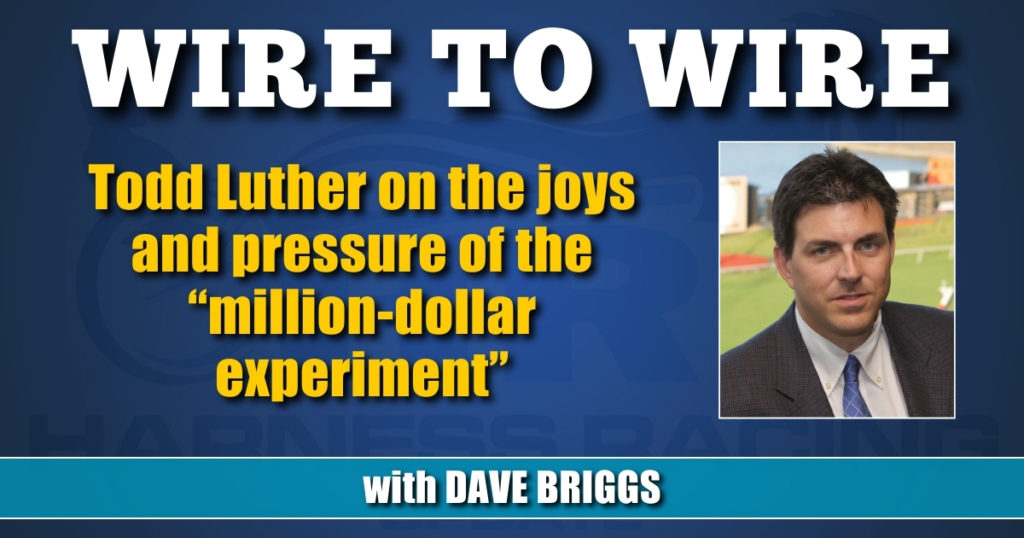 In a game needing new faces and new investors, it’s an early favorite for feel-good story of the year.

Trainer Todd Luther has a healthy perspective on being charged with making his brother Greg’s “million-dollar experiment” a success.

“It’s either going to go really well or… I joke with people all the time and say, ‘I’ve got my Walmart application filled out if this don’t pan out,’” Todd said last week as horses such as Water Sports Teen, A Fancy Face and Captains Place all picked up checks in stakes races in Pennsylvania and New Jersey.

Greg is a successful real estate coach based in Ohio who decided in 2020 to spend at least $1 million to stock Todd’s stable with potential stars.

Todd said he’s thrilled to be given the opportunity of a lifetime, but admits it has brought some added pressure to try to return some of his brother’s investment in horses that is creeping toward $4 million Background here:

“It’s tough, you know, because I want to do my best. My biggest fear is failing, and I do not want to fail. I don’t want to be the laughingstock, for the money that he’s spent, but every day, everybody in the barn comes to work hard. The pressure, I think, will mount up later in the year once they all get racing, but so far so good, I think,” Todd said.

“We’ve come a long way from the claimers. It’s a totally new ball game. From prepping horses other than claimers that you race every week, to now prepping horses for the races we want to be in, I’ve been very fortunate this year… that Greg said, ‘We’re going to be put on the map.’”

Sure, there’s some jealousy in the industry that he’s suddenly been gifted a stable full of talented horses, but most people are happy to see Todd Luther get his shot at training great horses and attempting to win classics such as the Little Brown Jug and Meadowlands Pace.

In a game needing new faces and new investors, it’s an early favorite for feel-good story of the year.

“There’s as many haters as there are people rooting me on, but here at Virgil’s back home, on race days, my phone is blowing up all the time with people just saying good luck and ‘We hope that you make it.’ So, we’re going to give it 100 per cent,” Todd said.

Saturday (May 15), Todd will start Chief Mate in the second of two $50,000 Graduate divisions at The Meadowlands in the second leg of the series.

Two weeks ago, Todd made his first start at The Big M in more than five years when Chief Mate, a horse that topped this year’s January Tattersalls Winter Mixed Sale with a bid of $220,000 (U.S.), finished third in his first leg Graduate test.

“I was very excited to be on the big stage and nervous at the same time,” Todd said, adding he’s only raced one other horse at the Meadowlands.

“I had a horse that was out east a long time ago, I think five or six years, and we needed a start and just raced him there and he was just in a non-winners of one, but this is the first time on the big stage like that and it was very exciting.”

On Sunday (May 16), Luther will race sophomore pacing colts Water Sports Teen and Captains Place at The Downs at Mohegan Sun Pocono in divisions of the Pennsylvania Sires Stakes (PASS) and Pennsylvania Stallion Series, respectively.

Todd said his brother has long talked about buying a bunch of talented horses, but something different came over Greg during last fall’s yearling sales.

“Any one that we had picked out, he bought. Then, when the Meadowlands sale came out, he said, ‘Let’s just keep going. Let’s get us some Grand Circuit horses,’” Todd said.

Greg then bought a few horses — including Water Sports Teen — from the estate of noted breeder and owner Bob Key. Greg then took his horse acquisition hobby online.

“He has a website, www.sellmyhorsenow.com and we bought a few off of that. I have a bunch of blank checks, so if we see something we like, it’s free will, pretty much, to buy. We don’t want to overpay, but he wants the top-calibre horses,” Todd said, adding he would love to win the Meadowlands Pace one day and his brother’s biggest dream is to win the Jug.

“I used to train at Delaware,” Todd said.

As for whether he owes Greg a big Christmas present this year, Todd said he’s already working on it.

“I’m hoping that my big Christmas gift is for these horses to perform like I think they will for him,” Todd said. “I think it would be kind of cool to start from the claimers and get to where we are now and I think we have the horses in the barn that can compete on a very high level.”