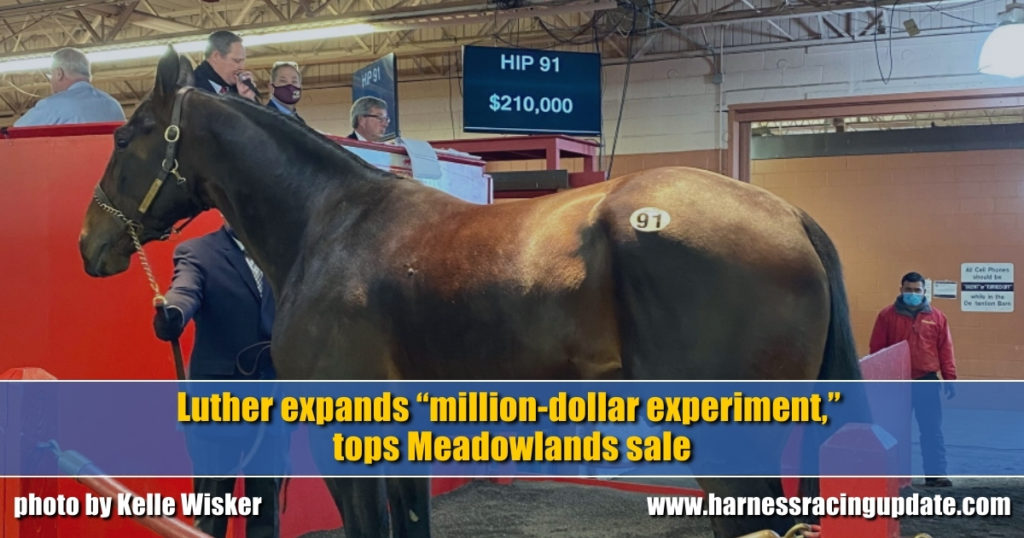 After announcing last fall he was trying a “million-dollar experiment” by spending seven figures on yearlings, the Ohio-based real estate coach and marketer continued to stock his brother’s barn with the two top-priced horses sold Monday at the Tattersalls Winter Mixed Sale. The hope is that Luther’s Black Magic Racing can compete with the elite and one day win the coveted Little Brown Jug.

Greg Luther said his “million-dollar experiment” is now north of $3 million, but the Ohio native is determined to make a splash on the Grand Circuit in the next few years. He certainly made an impression Monday afternoon (Jan. 18), at the Tattersalls Winter Mixed Sale held in the paddock at the Meadowlands Racetrack in New Jersey.

Last fall, Luther, who races under the name Black Magic Racing LLC, spent some $1.1 million to buy 22 horses at the yearling sales — which at the time he called a “million-dollar experiment” (full story here).

“And then I’ve been buying up a lot of good racehorses and older horses and we’ve spent well over another million there, trying to fill
up the barn with extremely good stock and give everybody a fair shot. That’s our goal,” he said when reached in his car while he was driving home to Ohio from the Meadowlands. “I’m really looking forward to the year with the 2-year-olds, getting some Ohio and Pennsylvania-breds and trying to get the best of the best. I think we’re going to have a phenomenal year this year. We’re definitely loading up the stalls with some good stock.”

Luther’s brother, Todd Luther — based out of the Winner Circle Training Center south of Columbus, OH — will train the stable.
“(Todd) said he hadn’t slept in about three weeks, so there’s no pressure at all,” Greg said, laughing. “He worked for Brian Brown for a few years, so he would go on the big circuit, and his fiancée Toni Dale Hollar took care of Downbytheseaside. She was his groom and we bought a whole bunch of his really good horses this year. She’s got one she really likes because he looks a lot like Seaside.

“We’re definitely set up with some really good stock. Our team is phenomenal and I really feel comfortable with the investment that we’re making based on the quality of the team we have for us here. Good team and good horses, we’re hoping that with a little bit of luck we’ll have a great year.

“There’s so many big trainers and a lot of times they do well and they deserve what they get, but they always seem to win the big races and I’d love for the little guy to win some time. And keeping it in the family and trying to do a good job, I think it would be quite the story if we can eventually get there ourselves with the team we’ve had all along. It’s a grassroots effort.”

Greg, who lives in Reynoldsburg, OH, east of Columbus, said his goal is to win the Little Brown Jug.

“I really looked up to my grandfather as a young kid,” Greg said. “My grandfather worked for Gene Riegle for years and I remember at 11 years old, as we were walking up to the racetrack for the Little Brown Jug, he said, ‘If you ever make it to this race, you’ve made it in life.’ So, that’s really stuck in my mind. I remember that and here we are 31 years later and I still remember that to this day. The Jug is like no other and the number one item on my life’s bucket list is to win the Little Brown Jug. My grandfather passed away about 17 or 18 years ago, but I think about it every year and I’m trying to get it lined up.

“Captains Place is probably our best shot this year,” Greg said. “He’s eligible to the Jug this year. Maybe he’s the one, but I’m just going to keep investing tons of money until we get into that race, that’s the whole goal.”

Greg owns and operates Greg Luther Coaching, a marketing and real estate coaching business that has been particularly successful during 2020.

“COVID-19 has actually helped me because I’m an online business and there’s more people sitting at home. I know it’s been devastating for a lot of people, but it’s been great for me and my confidence level for taking some of my investment money and putting it over into the horses… it’s what I love to do.

“I felt like it was a fair investment for me, to put money into the business I love and support the breeders and really give everybody a fair chance to profit. Obviously, when one person does well, we want the entire industry to do well, so I like putting back into the industry and taking the big gamble, so to speak.”

Greg said he owns all 50 horses solo, other than Catch The Fire, whose original owner wanted to retain a piece.

As for his two most recent purchases, Greg said he came to New Jersey just to buy those two horses.

“I didn’t look at one other horse. Those were the two that I wanted and that’s the two that we took,” he said, adding that he was going to buy Captain Kirk “for whatever he was selling for… Chief Mate, I figured he would sell for $180,000 and we paid $220,000 for him. Captain Kirk, I felt like I would end up giving $300,000 for him, so they kind of evened each other out that way. I paid a little more for one and a little less for the other.”

“We’ve got to look at the stakes list because this is all new for me, but I know Chief Mate should be good in the Graduate this year because that’s definitely for 4-year-olds and Captain Kirk, he’s about 90 days away yet, so he won’t make it to the Levy…. All of the Grand Circuit races and, frankly, the Ohio Grand Circuit races, I’m excited about… Jim Ewart Memorial, Dayton Derby. I’d love to do it right there at home as well as travelling the country.”

As for his stable name, Luther said he came up with Black Magic Stable about a decade ago, but this year will say a lot about whether he continues to race under that name.

Hip 58 Karma’s Delight, a Captaintreacherous mare out of Darlin’s Delight, was the third highest-priced horse sold. Joe Parisi bought the 4-year-old mare for $157,000.

AVERAGE DOWN 24 PER CENT

This year’s catalogue, with 119 sold, was the smallest in recent history.

“I thought the sale had a good pace to it, very smooth sale that way,” he said. “Like every sale has been in recent years, quality sells well,” he said. “I thought the market held up very well and I was very happy with that.

“Going in, we knew we had a smaller catalogue and we knew we didn’t have the overall depth. There, again, for what we sold here today, I was very pleased with the marketplace.”

“It was the first time we really had to rely on all forms of technology to try to pull off a sale at the Meadowlands. I’ve got to thank the buyers and I’ve got to thank the sellers, but I also have to thank our staff because right from the barns to our sales office to everything leading up to our sale, our staff did a very good job with all the circumstances. So, a shout out has to go to them as well.”

“I had quite a bit of interest pre-sale,” Boni said, “and I thought, without knowing what to expect, the turnout was excellent… In spite of all of the COVID-19-related conditions everyone has dealt with, the market remained very strong.”

Reid said those that came to the sale were particularly cooperative with social distancing and mask rules.

“But we were also forced to go the online bidding route, which was successful, as well. We had a very good response to the online bidding overall, but we got flooded with requests immediately before the start of the sale, which unfortunately, as we had been saying, we needed to have this established beforehand. There were, undoubtedly, some people we didn’t get back to, but we got back to as many as we could and deemed it to be successful.”