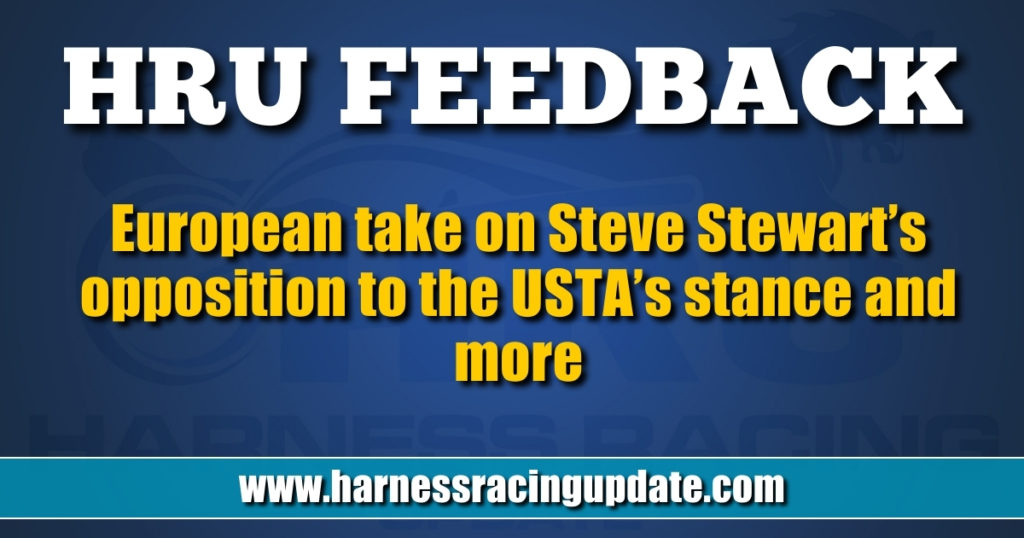 ** Editor’s note: After hearing Steve Stewart on this week’s Harness Racing Alumni Show, John Bootsman sent the following correspondence to Stewart and it was authorized for publication here.

Wow! I just listened to it from very first second to the very end. I must say: You have it 100 per cent right.

If you would tell ANY European that it is allowed in horse racing ”somewhere” on this planet that using a drug like Lasix on RACING DAY… they will look at you if you come from planet Mars.

We in Europe work a lot with ”legitimacy” of our horse-sports i.e. with the fact that we use horses in a racing sport and let the public bet on it.

We have to make sure we do everything possible that we treat this animal as good/fair as possible! (And that of course excludes drugs/medicines etc.)

And what you describe and explain about ”joining forces” with the thoroughbreds, about the necessary and reasons ”why it is good,” that is not really rocket science.

Thoughts on Heyden’s article about the lack of caretakers

Reading some of the degrading and cavalier comments from the various horsemen regarding the lack of caretaker help turned my stomach (full story here).

The harness horse business is populated for the most part by owners and trainers who have built their experiences and successes on the backs of what I can only define as indentured servants.

If they had to pay a living wage to their help these employees would not be living in the pathetic and often disgusting backstretch conditions I’ve seen at almost every racetrack in the United States.

I would ask, and I will NOT quote anyone from the article, several of these people to get off of their high horses and be a bit more appreciative of the people who care for their animals.

George Teague, Jr. deserves to be in the Hall of Fame

Now I know I am barking up the wrong tree because from what I understand it is up to the writers and the Hall of Fame committee.

I believe it is not a racist sport and the people that make our sport so great are all the most wonderful loving caring people in the country.

In recent years, of all the horse trainers that were inducted into the Hall of Fame… Mr. Teague stands out amongst them. Not only is he a great horseman, but from what I have seen and heard about Mr. Teague, he is truly a gentleman. Also, what he does for Delaware in terms of being involved with state legislators and promoting Delaware and harness racing in general I believe he’s not getting a fair shot.

I do not believe it is because of the color of his skin, but I believe he’s being overlooked for some undaunting reason to me.

I would really like the writers of this great news outlet… to start speaking out and speaking up for Mr. Teague. He deserves to be inducted into the Living Hall of Fame.

Debbie Little has been an awesome addition to the HRU stable of accomplished writers. Her essay on John Brennan, and Vince and Carmine Fusco was so informative and poignant (full story here). I loved the way she weaved together the narrative with quotes from so many stalwarts of our game. This article (“Remembering the Joy of…”), along with her work on James Davis’ work at the Big M and racism in our industry should be considered for some end-of-year journalistic accolades.