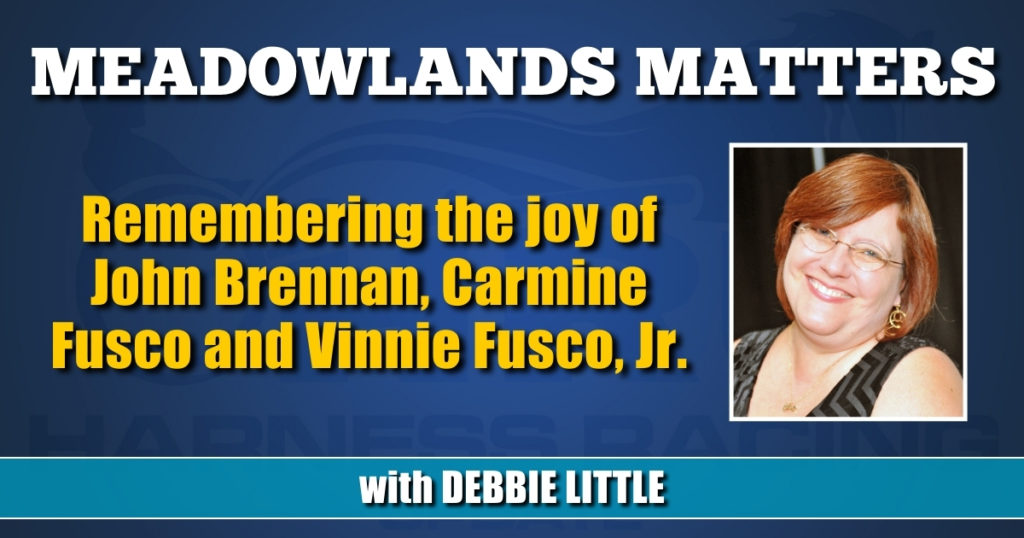 A year after the three horsemen died of COVID-19, friends and family remember them fondly for the joy they gave to those in their worlds.

At this time last year, harness racing was front-page news for all the wrong reasons.

And although their family and friends are still dealing with unthinkable loss, for this story, they chose to focus on and remember the joy these three horsemen brought to their lives.

Hall of Famer Bill O’Donnell was close friends with Brennan, having met him in the 1970s at Saratoga Raceway.

And although O’Donnell has a plethora of Brennan stories, there are two in particular that may not be well known.

“He was [jockey] Ronnie Turcotte’s bodyguard when they raced Secretariat,” said O’Donnell. “He had a painting on his wall of Secretariat – it was signed by Ronnie Turcotte, [trainer] Lucien Laurin and [owner] Penny Chenery – that they gave him.”

Turcotte, now 79, remembered Brennan’s name and said how important he would have been to him.

“They got a call when we were going to Arlington Park that if I crossed the wire in front, I wouldn’t go any further,” said Turcotte.

Perhaps it’s appropriate that Brenna is linked to a horse that had the biggest heart on record.

O’Donnell’s second story also involves a horse, the 2003 Hambletonian runner-up, Sugar Trader, who went on to win the Yonkers Trot.

Sugar Trader was a handful and although Luc Ouellette piloted him perfectly that year, Ouellette was not available to travel to Yonkers for The Trot.

O’Donnell said Brennan called him about who to get to drive.

“I said, ‘Go in the locker room at Yonkers and get the oldest guy in there to drive that horse that’s got some patience,’ because he needed a little help that horse,” said O’Donnell. “‘Just get somebody that’s really quiet.’ He said, ‘Cat Manzi’s the oldest guy,’ and I said, ‘That’s the guy.’”

O’Donnell remembers running into Manzi at some point and discussing the whole situation.

For any that didn’t know Brennan, at 6’3’’ he was a mountain of a man, which came in very handy the night of The Trot, because it took both he and his groom, Eric Marecki, to walk the horse back to the paddock. Since Sugar Trader had once reared in the paddock and hit Brennan in the head and knocked him out, they weren’t taking any chances.

Hall of Famer Linda Toscano also had a horse story about Brennan.

“When [Brennan] first came down from Saratoga, he didn’t know me and I didn’t know John and bottom line, he was looking for cheap horses and he claimed my horse [Tramp],” said Toscano. “Now, nobody would have claimed my horse because everybody knew he was my pet. It was fine. I understood the business, but I used to say to him all the time, ‘You claimed my only horse, I can’t even believe you did that.’

“So, years later I’ve got a guy who was looking to claim horses and I’m at The Meadowlands at this point and John’s got a decent stable at The Meadowlands and every day this guy would call me and say, ‘Can we claim this horse or that horse?’ And I’d say, ‘No, I’m not claiming from Noel Daley, or no, I’m not claiming from Jim Campbell.’ So, he hits on one and the horse’s name was Top Notch Memory and he said, ‘How about this?’ and I said, ‘John Brennan? Yeah, I owe him one.’ So, on the night the horse was in to go I walked over to John after the horse hit the racetrack and said, ‘I just want to give you a heads up, I’m claiming this horse tonight.’ And he said, ‘I can’t believe you’re taking my horse.’ I said, ‘I owe you one.’ He said, ‘Linda, that was 30 years ago.’ I said, ‘There’s no statute of limitations on murdering and claiming horses.’ He told everyone that story.”

Driver George Brennan was lucky enough to be friends with Brennan, Carmine and Vinnie.

“At Ray Schnittker’s wedding, John Brennan, myself and Mike Kimelman sang Calendar Girl,” said George. “John wanted to sing it and he asked Mike and me and we said we’ll sing it with you. We were terrible but we made people laugh.”

George’s life-long friendship with the Fuscos started when they were teenagers in 1981, competing in a North American junior driving tournament.

“Carmine would never get mad,” said George. “If people were arguing around him, he was always the equalizer. He was going to make everything better. I never saw him lose his cool. And Vinnie couldn’t do enough for you. If you came off the track and you needed a tire changed or you needed a new bike, Vinnie was always there. You couldn’t outwork those two guys.

“My biggest moment this year was winning the Vinnie Fusco Memorial at Freehold. And they don’t take pictures, but I went around and I did a lap and I stopped in the winner’s circle. I made the sign of the cross, pounded my heart, gave them a kiss. I loved them both so much, those guys. I miss them so much.”

Trainer Chubby Stallworth remembers Vinnie having a favorite saying around the barn from a movie called “Life” with Eddie Murphy and Martin Lawrence.

Jim Morrill Jr. had a, you-had-to-see-it-to-believe-it moment driving against Carmine at Yonkers back in the day.

“Going to the three-eighths, I start to come on the outside and I’m lefthanded,” said Morrill. “So, I reach over to snap the disk a little bit and yanked Carmine’s whip out of his hand.

“And now we’re coming around the third turn and I’m trying to keep up second over and I’ve got no go and Carmine’s on the inside. And now when we straighten up down the backside, he’s in front of me and he goes, ‘Hey, you don’t need your whip, give me yours.’ And I took my whip and I threw it like a dart and he reached right up and snagged it out of the air. You couldn’t throw it again in a million years and have someone catch it like that.”

The final words of this column belong to the families – John Brennan’s nephew Michael and Carmine and Vinnie’s sisters Adrian and Toni and nephew Ryan.

A year ago, the press hounded these two families and would not allow them to grieve in private. What was worse, perhaps, is that John, Carmine and Vinnie were treated simply as statistics.

On nightly news broadcasts, John was referred to as the first coronavirus death in New Jersey and rarely, if ever, by name, while Carmine had the same dubious distinction in Pennsylvania.

“That’s all they became, is this virus,” said Adrian, who stopped watching network TV for two months. “I just couldn’t watch the news anymore.”

“My uncle wasn’t a number, he was a person who died from the coronavirus,” said Michael. “He really looked out for the horsemen and besides the horsemen, he was such a good family man. He was a gentle giant.”

There were also stories about John being at a Fusco family dinner and about Fusco family members visiting from another country.

“John Brennan was not at our family dinner and no relatives were visiting from Italy,” said Toni.

Some horsemen have said they know they got the virus from John, which is impossible to prove since other people in the race office and paddock were sick before and at the same time as John, so there’s no way to determine who spread what to whom, especially if you add in asymptomatic people, and John wasn’t even at the track when some of these alleged virus-spreading incidents took place.

One thing that is undeniable is the loss for both families.

“We miss their presence and their voices but now we do stuff in their honor,” said Ryan.

Many in the family have donated convalescent plasma and they are taking part in a study by the Johns Hopkins University School of Medicine, looking into why the virus hit their family so hard.

“We don’t want to see anyone else’s family have to go through this,” said Ryan.

In addition to Carmine and Vinnie, the Fuscos also lost their eldest sister Rita, mom Grace and Aunt Maria to the virus.

“Eight of us went in and only three came out,” said Toni. “There’s a hole in our heart that will never mend.”

These were three kind-hearted men who each had a great sense of humor and would do anything for anyone. They wouldn’t think twice about buying a meal for someone in need or giving a set of winter warm-ups to someone who didn’t have any.

The Fuscos are a close-knit Italian family who, prior to COVID-19, enjoyed weekly Sunday night dinners whenever possible. Carmine and Vinnie were two of 11 siblings in this multi-generational harness family that included 26 nieces and nephews.

In the early ‘80s, when their father was injured in a spill at Freehold and hurt his shoulder, Carmine, as the oldest son, dropped out of high school to take over the family business to put food on the table until his dad recovered. Carmine would work with the horses by day and attend night school to get his diploma on time.

The brothers were known as hard workers but they also appreciated kicking back and having fun, which included wanting a Fudgie the Whale cake for their birthdays. And even though he was living in Pennsylvania, Carmine and his wife Christie always remained close to his family.

Vinnie’s wife Michele and children Aidan and Makena were his world and every year on Valentine’s Day, he would give his daughter a stuffed teddy bear.

John had three sisters and a brother, three nephews and a niece, two great nieces and a great nephew, all of which he adored.

Anyone who spent any time around John on race nights would see him FaceTiming with his great nieces and nephew, especially Michael’s daughter Madison, who is now 4.

“He FaceTimed with her the day he died,” said Michael. “She was in the tub and he was saying, ‘How you doing Maddie girl?’”

The John Brennan Trotting series starts at Yonkers Raceway on March 31 with a final on April 21.

John’s family will have a funeral mass/memorial on Saturday, June 26, at 11 a.m. at St. Francis de Sales Church in John’s hometown of Rockaway Beach, NY with a luncheon to follow at The Bungalow Bar.

In order for the mass and luncheon to run as smoothly as possible, and to give John the proper send off, the family requests that if you plan to attend the mass and/or luncheon, that you contact John’s nephew, Michael, at 917-731-6931.

The Fuscos are also considering a memorial, perhaps this summer, but currently have no specific date in mind.