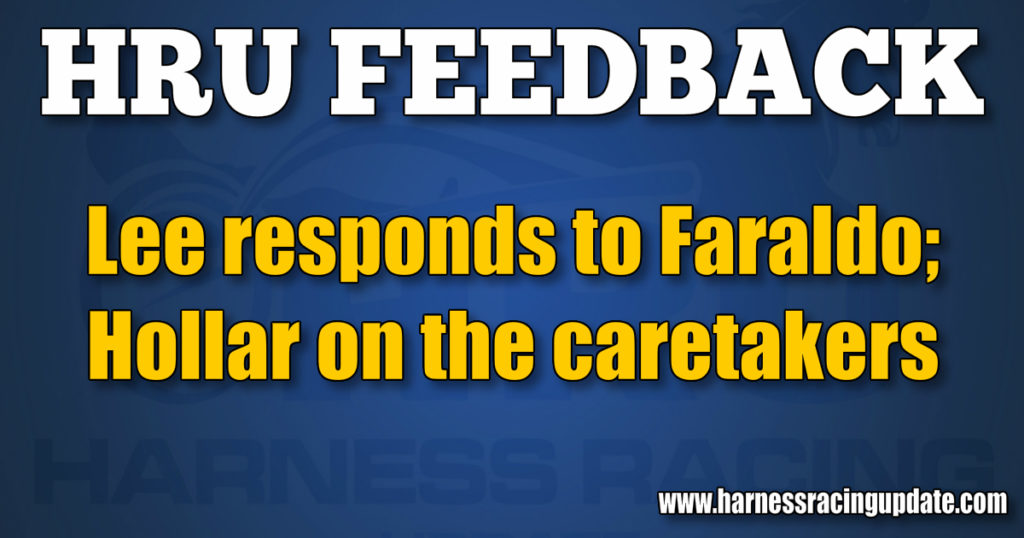 Is it fair or appropriate to say that an organization, because its members are not elected, responsible for computer systems or collecting revenue from various products and services, should have a lesser voice than the USTA? Joe Faraldo seems to think so. According to him, “From top to bottom the USTA has much more on its plate and much more responsibility to protect the viability of the sport of harness racing.” I have never seen an audited financial statement of USTA monies collected from thousands of members, racetracks served, or a benefit cost analysis of USTA’s investments like the national marketing strategy it initiated years ago. It sounds like the big bad wolf: we’re bigger, more well-funded and function with a structure with almost as many members as the U.S. congress. So of course the USTA, apparently alone, has “much more responsibility to protect the viability of the sport.” Neither size, membership, budget or funding, nor what’s “on its plate” should be justification to undermine, silence or dismiss another organization, especially one with an equally long history, and certainly one with unchallenged integrity over the course of that history.

Caretakers: one step forward, one step back

Victoria Howard wrote a wonderful piece on Susie McNair (full story here). She’s obviously passionate about caretakers needing more public praise than they receive for their hard work. I was disheartened to see the next main picture of Caviart Ally (full story here on pg 16). In the caption, owners Buck and Judy Chaffee are named but not caretaker Julianna Edwards or driver Andrew McCarthy. Granted Julianna was not Ally’s main caretaker and Andrew is very high profile but I think it really did a disservice to the job Julianna performed that day in Lexington to get Ally to the win circle. I’m sure the Chaffee’s were very appreciative. I understand sometimes getting the name of a “catch-paddocker” might be difficult but in harness racing there is rarely six degrees of separation, more like two.