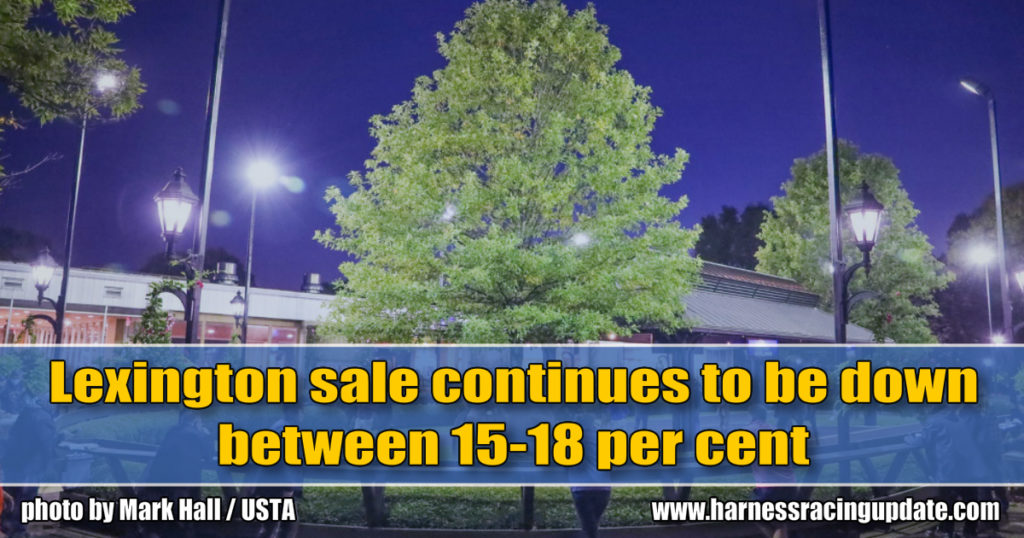 Lexington sale continues to be down between 15-18 per cent

After three sessions, the Lexington Selected Yearling Sale is down 18 per cent in average and 15.5 per cent in gross compared to the first three sale sessions of the record-breaking 2019 sale.

The third session of the Lexington Selected Yearling Sale — held Wednesday (Oct. 7) at the Fasig-Tipton sales pavilion — continued a three-night trend of being down between 15-18 per cent compared to last year’s record-breaking sale (full story here). Though, the gross through the first three nights is almost on par with the 2018 sale.

The session started at 7 p.m. and ended just before midnight.

“I wish the crowd would’ve been a little bigger, but all in all it was a pretty good,” said Randy Manges, who manages the sale with David Reid. “We’re still averaging $68,000 (through three days) and our gross was not as much as last year’s gross for the third night, but it’s about what it was two years ago, so I’m real pleased with that. Under the conditions, I think that’s really good.”

Online bids on Wednesday through Proxibid totalled $440,000 in sales, total, for 15 yearlings sold. Online bidders were also the under-bidders on 15 other yearlings.

“The number of people that have used that vehicle to bid, I think that’s really been a plus for us,” Manges said.

“We are happy with ours,” said Diamond Creek’s Adam Bowden. “From the beginning, we knew it was going to be off and I thought maybe 10 to 15 per cent and it looks like maybe it’s a touch more than that. For our consignment, we’re meeting and exceeding expectations. From my point of view, we feel confident that we brought the right horses and we’ve been paid fairly for them.”

Bowden said he was looking forward to Friday night’s session.

“We have… three Downbytheseasides on Friday that we’re happy about that. We’ve been around and we may be biased, but we think we’ve got three of the better ones out there in terms of physical and pedigree. We’re going to have a Beach party here on Friday night,” Bowden said. “It’s sort of like Ohio’s Day 1, there’s top quality horses in Day 5. I wish they were spread out across the book, but we’re going to make a big party out of it with beer and mixed drinks, so everyone is welcome to come.”

The third-session topper was Hip #477 Knockout Lindy, a Muscle Hill colt out of Kinda Crazy Lindy that sold to Ken Jacobs for $172,000. Knockout Lindy was bred by Lindy Farms of Connecticut and consigned by Preferred Equine.

Hip #392, a Walner colt out of Woman’s Will named Play Fiercely sold for $160,000 to trainer Marcus Melander, agent for Courant Inc. It is the same connections that purchased the topper from opening night — a Walner filly out of Mission Brief named Kadena — for $725,000. Through three nights, Kadena still tops the sale with two sessions left.

Play Fiercely was bred by Al Libfeld and Marvin Katz, raised at Jimmy Glass’ Walco Farms in Kentucky and consigned by Kentuckiana.

“He’s a very athletic colt that can get over the ground,” Glass said. “The mother we raised as well through our program, a Donato filly that made $600,000 and she had a really nice foal that’s been very quick and athletic in the paddock and I think that’s what the buyers saw.

“(The Walners) all could trot and they were received well, but this guy had a little bit extra athleticism on the end of it. Very nice in the paddock and I think that’s what sold it.”

“The first two days I was buying a few horses that I could’ve gone more on, probably could’ve gone twice as much as I did on some of those fillies the first two days, but they just sold lower,” Beaver said. “I think there’s a big gap in the sale between the top, top end and the nice horses just below it.

“I’m trying to fill my barn with nicer horses, but less, you know. I had like 40 2-year-olds this year. To me, that was too many and you’re chasing problems a lot. I like to fill the barn with a little bit fewer 2-year-olds, but better quality. Hopefully, better-gaited and easier to train.”

“I’ve seen some new people in town today and hopefully we’ll see some new ones tomorrow,” Manges said. “Then, of course, Friday with the regional horses we’re selling I expect a whole other group of people in town. Hopefully, that’ll work. And we’ve got a lot more people that want to sign up on Proxibid as well, so that’s good.”

The fourth session of the Lexington Selected Yearling Sale will feature 170 yearlings. It begins tonight at 7 p.m. at Fasig-Tipton. For more information about the sale, please visit: http://www.lexingtonselected.com.