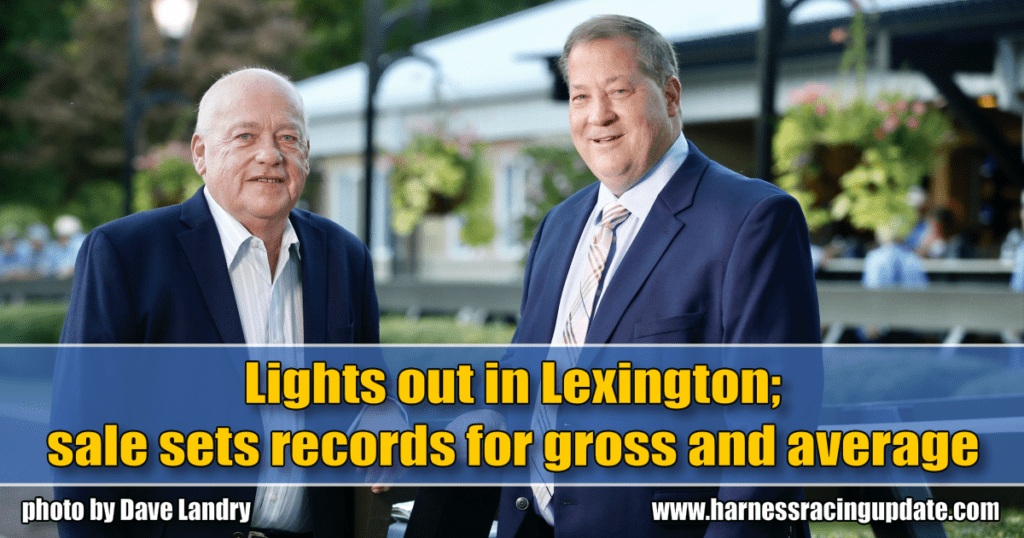 Auction for the ages: Lexington sale sets new records for gross and average

The Lexington Selected Yearling Sale concluded Saturday with a gross of $46.48 million and an average of $60,997.

“The average is up, so there’s a bigger demand,” said Randy Manges, who manages the sale with David Reid, who added that he looks at the increase in the median as an indicator of strength in more jurisdictions.

“You’re not getting an influx of Europeans or Pennsylvanians or Ontarians or New Yorkers, so it has to be a broad-based increase. I think the biggest thing all week has just been the offerings of a lot of the new sires,” Reid said.

“It’s a very deep group right now with the young sires, such as Captaintreacherous and Sweet Lou and Muscle Hill, Father Patrick, Trixton, and then we did very well with the foreign-bred horses, Love Yous and Ready Cash. I think it’s just a mix of the depth of the sire choices. In fairness, that’s a great tribute to our breeders that sell here and us to recruit them to sell at our sale, because we really believe that we’re truly an international sale and we focus on that when we try to recruit.”

“I think it’s a huge achievement,” Reid said of the million-dollar horses. “It definitely breaks a barrier. I think it’s going to be easier to sell the next one (for a million)… Speaking on behalf of Randy and myself, we’re happy that we’re the ones that broke the barrier.”

Adam Bowden of Diamond Creek Farm said, “it seems like we’ve been building to this point and the question was posed early this spring of ‘Can there be a million-dollar yearling?’ and I’ve always been bullish that if it was going to happen it was going to be this year with Greenshoe’s brother and it happened to be Propulsion’s full brother as well, which was great. Father Patrick and Muscle Hill (siring) the two million-dollar yearlings, I think, sort of says everything that they are the pre-eminent stallions in the sport right now. Father Patrick is right there with Muscle Hill and we couldn’t be more thrilled… We were very blessed to be part of Father Patrick’s group, with them allowing us to buy into the horse.”

“Marvin and Al and the whole team does an amazing job of really working together to make great animals,” said Kentuckiana’s Ken Jackson. “Selling a $1.1 million horse is exciting. I think it sets a threshold in our industry. Are we going to have a seven-figure horse every year from now on? Probably not, but I think it makes $500,000 a lot more possible.”

“(Brady) said, ‘I’m glad the hammer dropped.’ It’s that whole lead-up, you know, you start hearing it, you start talking about it and then you get them shipped in and everything and you just want to make sure that nothing happens in the stall because that can always happen; make sure that nothing happens on the lead down, so I think Bob was relieved. There’s nobody that makes a better animal than Bob. He’s been a great partner and he knows how to really raise a good animal and he puts a lot of time, effort and passion into it, so it’s really exciting to see him get rewarded and get credit for it,” Jackson said.

Bowden, who stands three stallions that offered their first crops of yearlings — Always B Miki, Southwind Frank and Creatine — said he’s pleased with how the rookie stallions sold.

“Creatine himself exceeded expectations. He sold a filly and a colt for $60,000, which was beyond our expectations. He owns a special place in our heart, being a homebred and made $2 million dollars for us and then to see his first crop… we supported him with some good mares and so did other people. There were specific people out there that thought the same way that we did, so we were just very pleased,” Bowden said.

“Southwind Frank, as well. He sold a $200,000 yearling on opening night, then had a couple others bring six figures, so he sort of belongs in that group of new stallions that people felt very strongly about. Miki had a great book of mares and the individuals matched the pedigrees. He was popular as well.”

Saturday’s session-topper was Taboom, an Always A Virgin colt out of Walstan’s Lady sold for $97,000 to Kathy Smith of Ohio, who also purchased the third highest priced yearling sold that night — Swan For All—Love To Win filly Love for All for $93,000. Both yearlings were consigned by Anvil And Lace Farm, Agent.

As to what the record-breaking sale says about the health of the industry, the experts had some theories.

“I think everybody complains about our president, but I think our president has got the economy in the right place for everybody to be happy,” said Winbak Farms’ Joe Thomson. “Everybody is making more money, unemployment is down, stock market is at record numbers and people stopped complaining. When I was in the service they said when the guys stopped complaining there must be something wrong with them, so I guess under that statement then maybe the world is doing okay.

“When you get the stock market or discretionary income going up then horses and other things like that will do well. When you’ve got it going the other way then you’re in a recession and stock markets are in the tank, you’re going to find people don’t have the confidence to put forth the money to buy into things.

“As far as the confidence that the market can support big-time horses, we’ve got the people and we’ve got the people that are buyers that have very deep pockets and when they team up there’s a lot of money that can be had to drive the top of the market. That’s kind of where the thoroughbreds have been for a long time. It’s the top part of the market that makes all the headlines and the others slug it out just like everyone else in the horse business.”

Jackson said the sale is the indication of a positive trend both for the Lexington Selected Yearling Sale and the industry itself.

“What we’ve been seeing in the last couple of years at the sales is going to continue to happen,” Jackson said. “This is a global industry and it’s no different than technology… you can reach so many people in a phone call, in a Skype. Everything is global now and it makes it easier. When you see this happen and you see a global person buying a million-dollar horse… Everything has been positive. The racing has been great. Obviously, the sales company and the partners in the sales company do a great job with all that – Randy, Dave and the team do a wonderful job – and our consignors. It’s an exciting week.”