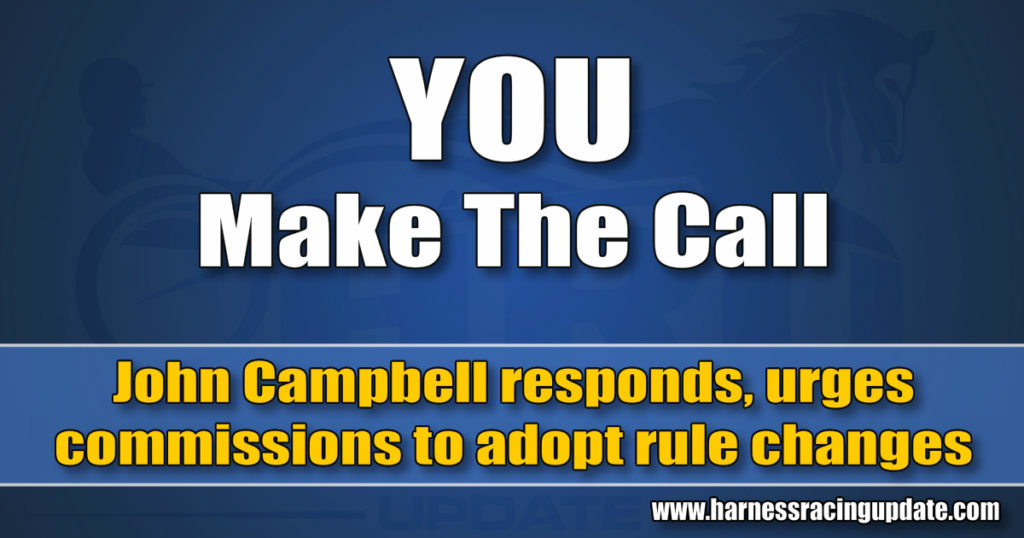 After the July 15 issue, Hambletonian Society president John Campbell wrote in with the following feedback:

I would like to belatedly comment on your You Make The Call feature regarding the 4th race at Yonkers on July 7. The issue was an extended run in the stretch.

In 2017, I formed a committee to revisit the racing rules in the USTA rule book.

It was made up of a cross section of people from within the industry drivers, judges, racetrack operators, horsemen association representatives and the executive director of a racing commission.

I have to commend the USTA and their board for being very open and receptive to what we were trying to accomplish.

We wanted the racing rules to be more concise and definitive and thus make it easier for judges to make decisions and also paint a clearer picture for participants and horse players.

One of the rules that we addressed was the extended run rule.

It was proposed and passed by the USTA that: An extended break shall be defined as a horse that is not on its proper gait for 25 strides or more.

This rule was also passed into Model Rules by the Association of Racing Commissions International [ARCI]. However, to my knowledge, The New York State Gaming Commission and most states have not adopted this rule.

If this rule was in effect, there would have been no debate as it was clear the offending horse was off stride for well over the 25 stride limit.

USTA rules also state that: Committing an extended break, in which the horse may be placed last.

I would also like to bring up another rule that we proposed and was passed by the USTA as well as adopted into model rules at ARCI.

This involves a race with multiple trailers, as was the case last week in the Hambletonian Maturity.

The rule states: In a race with a single trailer, the driver may select any position in the second tier.

The horse drawing the second post in the second tier shall score behind the third or fourth horse in the first tier.

The horse drawing the third post in the second tier shall score behind the fifth or sixth horse.

This gives the drivers of horses in the second tier more options in regard to strategy, it is safer and reduces the risk of a recall due to interference before the start of the race.

Again, this is not unprecedented as many jurisdictions in Europe use this protocol.

I do not believe that many states have adopted this rule either.

While we were reviewing our racing rules in the United States, Standardbred Canada was spearheading a similar movement as well.

They have made recommendations to all of their jurisdictions regarding racing rules that either mirror or are similar to what we presented and were passed by the USTA and ARCI, including these two rules referenced above.

There is an avenue for racing rules to be very similar throughout North America, we can only hope that enough jurisdictions take advantage of this and as I stated earlier paint a clearer, more consistent picture for fans, participants and judges.