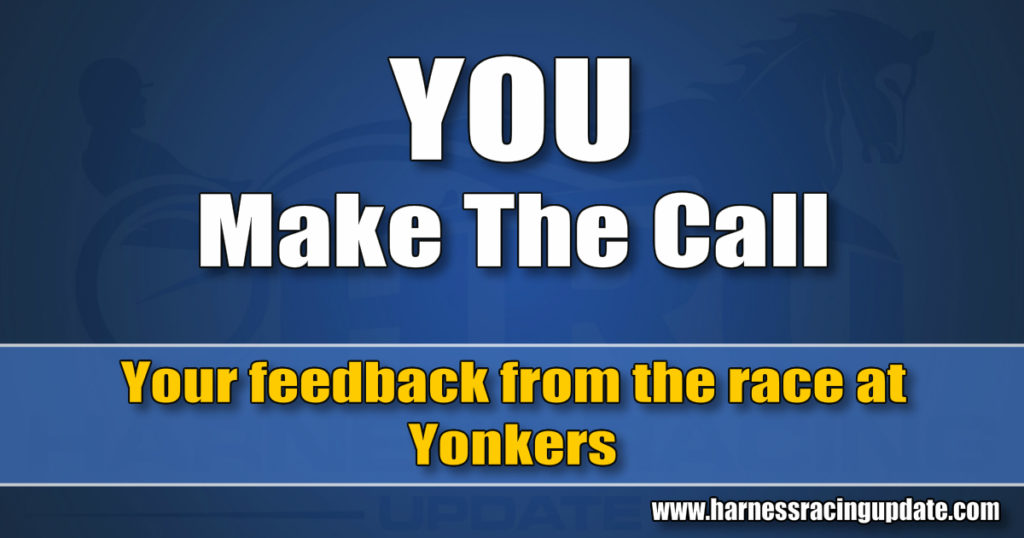 You Make The Call – feedback

In our July 12 issue (full story here), we asked you to make the call on a race at Yonkers on July 7 (replay available here).
Here’s some of your feedback:

4 should have stayed 3rd.
—Caesar Fiorini

I don’t have a problem with the judges call. The horse was on a break for most of the stretch and he wasn’t restrained much.
—Don Neuwirth

I wouldn’t have placed anyone. There wasn’t any interference and every horse that made breaks lost ground.
—Donald Pfister

Correct Call. Placed last for failure to attempt to get the breaking horse back on gate. The driver let him run the last 16th of a mile.
—Jeffrey Feinman

I believe Limitless Winner should have remained 3rd. The driver of Limitless Winner grabs into him to try to get him back on gait. At least it looks that way to me. I see no reason to place him behind the other two who made earlier breaks.
—Darren Henry

I do not understand why Limitless Winner was placed. No interference and he did lose ground while on the gallop. Crossing the line in a break is not reason enough to place him. If it were, there wouldn’t be a rule about being lapped on.
—David Glasser

Guessing the judges invoked the “Extended Break” rule. I understand the importance of the rule, but I believe an slight tweak should be made. The driver did everything in his power to follow the breaking rule but since the horse ran over “25” strides he “can be” set to last. If the horse runs with the field and loses just a length or two and comes back behind the pack, understandable placing. But the other horses never had a chance in catching.
—Casey Larson

Extended break. They will call that every time.
—Ron Tull