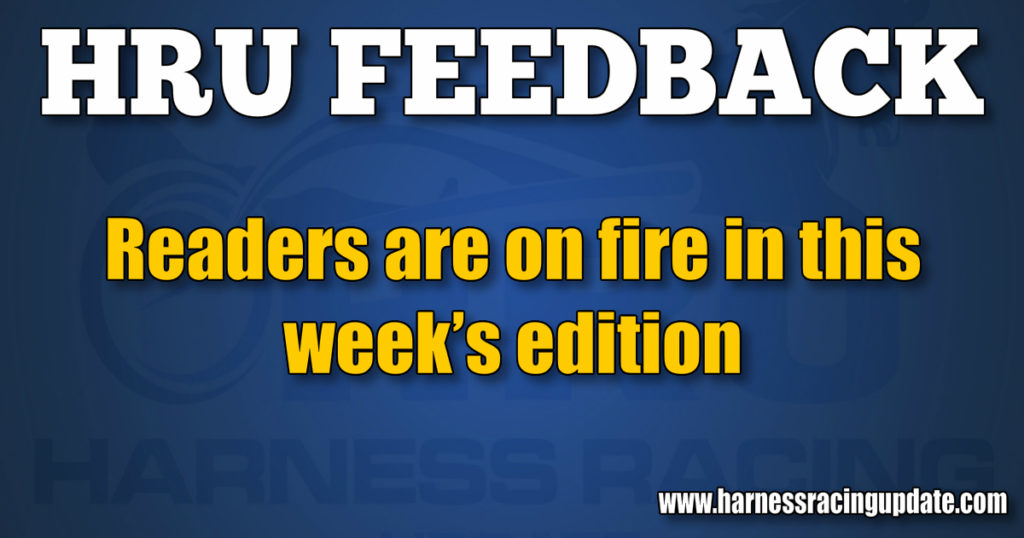 My opinion on this ruling (full story here) is that it is not disappointing at all. I thought Mark Casse’s story about how Clenbuterol is being abused was very compelling. I believe that most trainers including myself agree with Bob McIntosh and Anthony (MacDonald) and haven’t used it in years for fear of getting a positive test. We have been getting along fine without it so if we can eliminate the abuse to our horses and our sport that is going on its well worth it. I also have to question the wisdom of writing and putting forward this opinion especially after the ruling has been made. HEADLINE-Harness horse trainers want to keep using banned drug that is suspected of being abused to enhance horses performance. Not the kind of publicity we need!!

Fingerprinting needs to be abolished

With COVID-19 paralyzing the racing industry, it would be appropriate to examine one standard used by every state: finger printing. Please tell me who at this time wants to be touched to get finger printed? The answer is no one, especially with social distancing because of the Covid-19.. I also would like to know why is finger printing necessary? We use drivers licences and social security numbers for identification, is it is because horse owners and trainers are bank robbers or felons? It would be nice to hear what the racing commissions wants other than money for finger printing. What has fingerprinting accomplished?
I hope at this time common sense will prevail.

No qualifiers? No harness racing

Ray Schnittker (full story here) shows once again how little he cares about the customers who enable him to make a living racing standardbreds. The qualifiers he loathes are what separates harness racing fans from thoroughbreds fans. If he wants our game to be like thoroughbred racing, I see no reason why there should be harness racing at all. Then he tries to sell the notion that the reason harness racing in America is less popular than in France is because they don’t waste time with qualifiers. Anyone else think that this is our problem? Plus, anybody who thinks thoroughbred workout times are accurate needs a check-up from the neck up. I know I play harness racing a lot less since we see horses racing with layoffs of over a month. Players are clueless as to their readiness to race. In fact, I would like to see harness racing go in a different direction. I would like to see qualifiers from all tracks available online. All that is needed is for the Harness Racing Commission’s office to…

Silly me. I tried to slip the Harness Racing Commission Office by you guys as if harness racing was an actual business.

Feedback on the Dream Pace

Don’t know how my esteemed colleague Jerry Connors did his “dream race” (full story here) but my race of the decade was done this way:

I simply drew post positions then lined them up card like around an oval table and let each horse move the way their style and positioning dictated. As it was, Cardigan Bay wound up with the perfect second over trip and was along in a three horse photo.

Romeo Hanover fastest out of the gate got the lead but was pressured by Tarquinius into the second quarter. Meadow Skipper of course got parked the mile from his outside post while pocket sitting Bret Hanover shook loose inside Romeo in deep stretch as third over Overtrick was flying on the far outside.

Change the positioning and most likely a different result.

In the one I did for Hub Rail Magazine, I had to make them finish as the voting dictated and there were some horses that unfortunately had been omitted while one or two were not quite at the level at the omitted.

In this case, I assigned post positions and ran the race multiple times until I could arrive at a plausible outcome in terms of the actual finish.

I don’t remember who won that one!

Kudos to Jerry Collins for a dream race well done!

More feedback on the Dream Pace

From our readers on the Dream Pace:

Wiggle It Jiggle It getting a Yannick trip and nipping Somebeachsomewhere, with John Campbell giving Real Desire a perfect drive for third.

Won The West better than most of those.

I would not argue with anything except the finish. The Beach wins in my opinion! Fun to think about though!

How could anyone leave Shartin N out of this dream race? The only mare in history to win Horse of the year, at 7 years old no less. A lifetime mark of 1:46.4 that tops five of the boys in your dream race. Common sense says she deserves to be in there. The only reason she didn’t rank up there in earnings is because the girls purses aren’t as big. I’d stack Shartin N up against all of these great champions. You missed the boat on this one.

You get the flash in the pan Roy to drive McWicked when Magic Man set a then 1:46 1/5 WR with CAMBEST at this track – fubar!!

Also, if not Magic Man, why not PALONE, DUNN, McCARTHY, or HENNESSEY / ANDY MILLER ?

I did like your race call & A B Miki a great horse, but ask Campbell, Pierce, D. Miller, and Gingras if they could choose “Beach” Would they?

This was so great. The breakdown of the horses, the thrilling calls at each quarter, the stirring stretch duel, the amazing finish. Then the interviews with the drivers. The best line was Ron Pierce could go back to the mountains. HaHa.

Lather up was given too much credit. He was never better than Wiggle It Jiggleit. There cannot be a great race the last two decades without Foiled Again. They did not give him $7 million. The way you ran the race was wrong with Yannick driving Wiggle, would have the front.

How much did the trifecta pay?

Come on, how can Foiled be an AE? Real Desire over Foiled? Captaintreacherous over Foiled? Am surprised you guys would even consider this race without him in it. I would have assigned posts to make the race more evenly matched. Would have been more interesting to have an announcer call the race.

Fantastic job, and when I glanced through the field, my eyes went to the horse who I always thought had the biggest turn of foot and the most impressive to me. That’s right, I had $50 win and place on the 6, Always be Mikki. 🙂

Was a very good read, nice job with the race call. During these tough times, put a smile on my face. Now if my all-time favorite, the iron horse, Hot Lead (1996? Meadowlands Pace winner with Georgie Brennan) had been in the race, I’d have probably ripped up my tickets but would have loved hearing “here comes the iron horse, Hot Lead, charging down the center of the track” one more time!