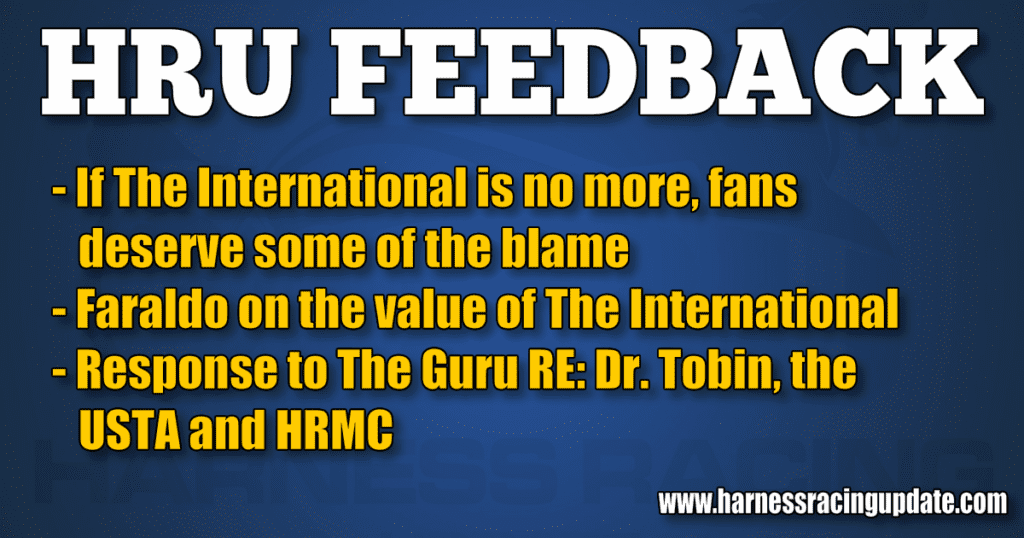 If The International is no more, fans deserve some of the blame

We just saw another great day of racing at Yonkers Raceway. Unfortunately I feel it may be the last. I went on track the first year (The International) was renewed but was disappointed by the on track experience. The old management, just like I am sure MGM management, seems more interested in operating the casino rather than the racetrack. I have watched and wagered on this race card every year since via my advanced deposit wagering account. Since it takes me over 3 hours to get to Yonkers and the gas and tolls it is much more convent to wager from home. Unfortunately, I have noticed the mutual dollars bet on the card were less than a million dollars. If MGM is going to evaluate this race from a business standpoint I don’t see how it will make sense to them to continue it. We as fans must also take some of the blame. If we do not support the big races by going on track or at least betting reasonable amounts via simulcast or advance deposit accounts how can we complain if track managements reduce purses or eliminate marquee events?

Faraldo on the value of The International

I couldn’t agree more with the opinion Davis Briggs voiced regarding the ultimate value of our International Trot (IT) full story here.

After the agreement to transmit 26 Sunday cards to the PMU’s worldwide distribution network, Tim Rooney and I agreed to revive the IT, an event so important to all our European friends that it is referred to overseas as the “World Championship.” MGM Resorts needed only minimal convincing that they were getting a marquis event handed to them and that it should be continued. MGM received a lot of assistance from the SOA of NY, in the form of manpower as well as in the planning and in economic support for many of the social events that must accompany it. The social part of the week-long event is important and was recommended to me at the Paris yearling sale by Jerry Riordan six years ago. The week-long events are critical and are the reason the SOA jumped up in the riggin to help MGM, that had little knowledge of the sport in this first year of its ownership of the Hilltop Oval and The MGM comment, after seeing the Italians throw some of their group of 24 up in the air in the winner’s circle, was the need to promote and market this event better.

The MGM people have expressed interest in traveling to the Prix d ‘Amerique in January to see how the IT may be better promoted and marketed by those who do marketing so very well. As far as the size of the track, it is not its size that makes the event, it is all the effort put into it before the race. The world champion should be able to negotiate the half mile track. Over the years I have seen horses, some I have owned, unable to negotiate the half, so for me it is important for the horse wishing to wear the IT Crown to be able to win on any size track, the toughest being the half. Bold Eagle has made the trip to the Breeders Crown, skipping the IT, for that reason, the half. Bold Eagle is a proven commodity on the big track and the revival of the IT may have gotten his connections to focus on bringing that truly great horse to North America for another big event. The game is far better for the exposure generated by the IT for all our American Classics. It is good to see people recognizing the value IT has, but it isn’t going to be relocated, and were it ever to, it comes with a great responsibility both in terms of economic and social commitment that only one track, Yonkers and its horsemen have seen fit to undertake. Next year, if Zacon Gio is fit to defend his title he will come with a 100 Italian supporters because the event is viewed as so very important a race to win. Hopefully, some of the stud books closed to American breeders will also open up promoting an even better product through necessary gene pool diversification.  Thanks David for the kudos to Yonkers by MGM Resorts and the Yonkers horsemen.

Response to The Guru RE: Dr. Tobin, the USTA and HRMC

In his Oct. 18 “Ask the Guru” column (full story here). Ron Gurfein relates a story about his “very good friend” Dr. Tom Tobin and the doctor’s involvement as co-author of a particular study and his comments regarding a past medication issue involving a thoroughbred.

Gurfein concludes that “We (harness racing) face similar problems in our sport, it’s to (sic) bad that we don’t have a Dr. Tom Tobin to rectify matters.”
Well, actually, we do.

And not only do we have Dr. Tobin himself, but we also have quite a few other highly respected academic and practicing veterinarians who are members of the Harness Racing Medication Collaborative established by the U.S. Trotting Association through its Board of Directors’ Medication Subcommittee in May 2018.

The HRMC’s purpose is to assist in identifying and developing the scientific background for medication regulation in Standardbred racing. The USTA then provides the HRMC’s reports and supporting data to the Association of Racing Commissioners International to disseminate to its regulators in the various racing commissions.

You can read the HRMC announcement on the USTA website.

And what’s really puzzling is that the last time we responded to a “Guru” column published on June 21, 2019, in which Gurfein described a USTA statement on Lasix as “so terribly misinformed it’s embarrassing,” our response in Harness Racing Update included the following:

“A little more than a year ago, the USTA established the Harness Racing Medication Collaborative, which includes some of the most respected academic and practicing equine veterinarians in the country.”

And our reply concluded with this.

“Finally, attached is a letter from Dr. Thomas Tobin, one of the foremost experts on Lasix.”

In fact, not only is Dr. Tobin a member of the HRMC, but he made a presentation on behalf of the USTA to the ARCI in California last April.

There are many challenges facing harness racing, and horse racing in general, today. And a big one is how many people that are “so terribly misinformed it’s embarrassing” utilize a variety of forums to spout uninformed, inaccurate criticism rather than support for the sport that most of them are making or have made a living in.

That’s just not very smart and it doesn’t help.