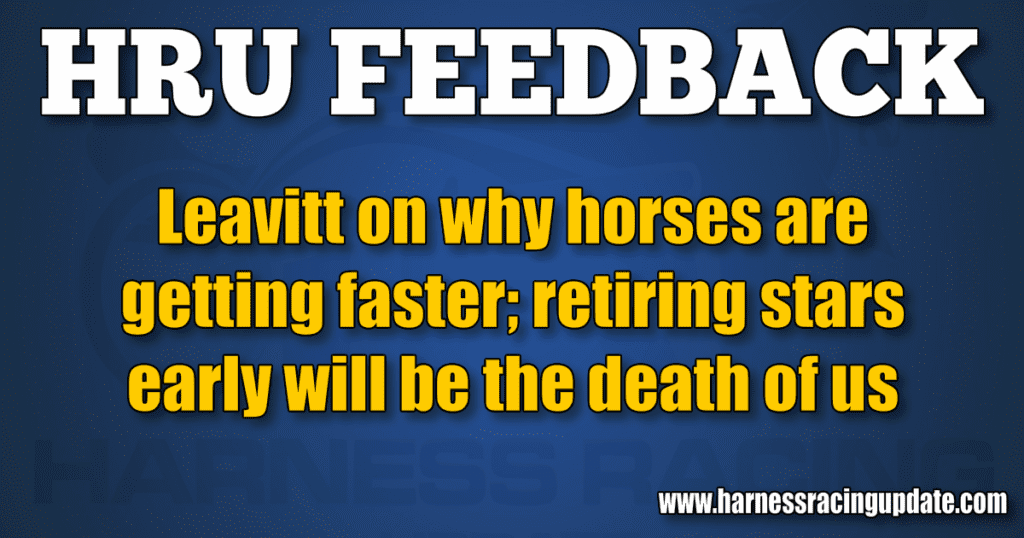 Why our horses are getting faster

Ronnie, I’m afraid I have to disagree with your reasoning RE: our records keep dropping and the thoroughbreds are static.

All of the chemical performance enhancers our trainers can use are equally available to thoroughbred trainers. It would be naïve to think we use them and they don’t.

The real reason lies in the fact that the thoroughbred breed is probably 100 years older than the standardbred breed, and at a certain point in time, any equine breed will hit a plateau and level off.

At some point, probably 100 years from now, maybe a little less, our breed will be fully developed and it will level off. At that point, our speed records will be static, just as the thoroughbred records are today. Until then, our trotters and pacers will continue going faster and faster. Some of them may be helped along chemically, but the main reason is simply nature.

Retiring horses early will be the death of our sport

After hearing the news this week that Greenshoe will be retired at the end of the season I can’t help but think that this is very very bad for the sport of harness racing. What is a sport without stars?

This happens so often in racing, both harness and thoroughbred racing. It seems to me that what both types of racing have become nothing but breeding shows. The actual racing is a distant second.

Every year there are big races, the Hambletonian, the Meadowlands Pace, etc. Someone has to win them. Does that mean that that horse was a great horse? A great horse or a star is a horse that races over the years and wins.
Forgive me a moment if I bring in a baseball analogy. Pete Alonzo of the Mets is a rookie and is doing extremely well in his first season in the major leagues. Is Pete Alonzo a baseball great? Should he be immediately enshrined in the Baseball Hall of Fame? He will have to perform at this level for years to come to be even considered as a Hall of Famer.

If he was a harness horse, he would be retired at the end of the season and sent off to make babies. How does this benefit the sport? Hopefully for years to come fans will go out to the ball park to watch and cheer Pete on. People go the ball park to see the great players and great pitching duels. deGrom Vs Kershaw for example. That’s something to see.

Where is this excitement in harness racing? Last week at Scioto Downs in Ohio there was a tremendous night of harness racing. All stakes races and two super big races. Atlanta and McWicked, both stars, won the two big races, both by a whisker or less. How McWicked won was truly amazing.

Who was there to watch and bet? The betting pool looked like the take at the local Church Bingo night. Harness racing only exists today based on casino money. I have been saying for years that this is going to be the death of the sport. The casino operators have been forced to have racing if they want to get the casino action. What happens, and it is happening now, when the casino operators go to the state and say, “Listen we have been running the racing for years and it loses money, we give you, the state, millions each year. We do not want to have racing.” What is the state eventually going to say? Look what’s happening at Monticello in NY.

What brings fans out to the track or makes him bet on his home computer or go to a local OTB? I can say this, it’s not to see the sons and daughters of the latest hot stallion. I look at the form or a race and see five horses by the same stallion. One is 4-5 and the another is 25-1. Huh? Both had the same father, so it’s the mother.

Many years ago, they bred Secretariat to Krissy Evert (the horse, not the tennis player) both were their sex’s Triple Crown winners, so they named the colt “Six Crowns.” The horse couldn’t put one foot in front of the other.

Where are the stars, where is the action? What does the sport do to generate interest? Too much racing? Too many tracks? No handle? I see pictures posted on Facebook showing great drivers and great horses of the past. The grandstands were full of people. What happened?

Whatever it was, or is, breeding is not the cure, it’s the illness. All sports need stars and without them there is no sport. Breed all you want, breed horses that always have injuries, keep breeding them and selling them for big bucks. Boast horses’ race history so you can send him off as champs. When there’s no racetracks to race at and no interest in the sport are you going to bring back the horse drawn carriage?