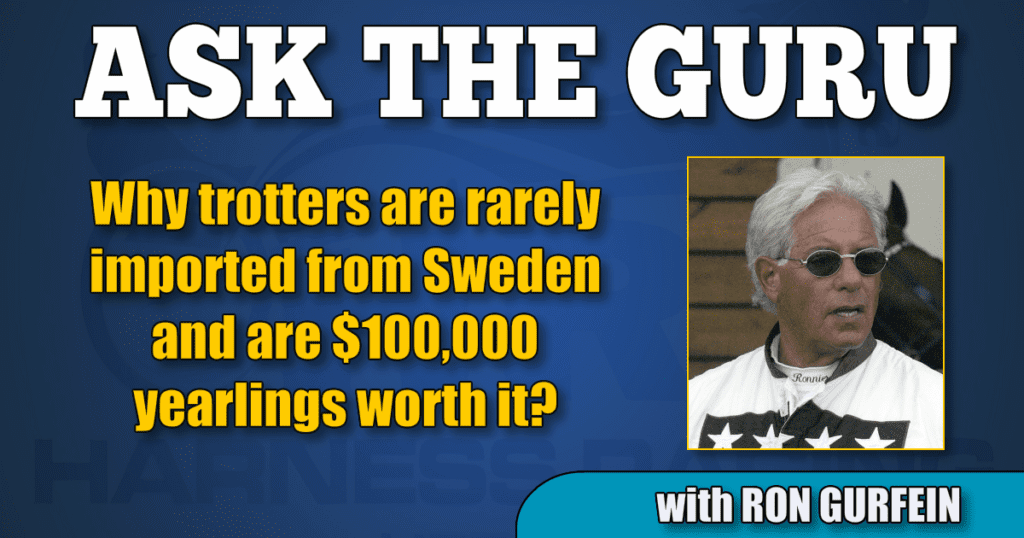 Why trotters are rarely imported from Sweden and are $100,000 yearlings worth it?

Plus thoughts on why speed kills and much more in the latest installment of harness racing’s most popular advice column.

Tidbits: It’s happened again, right on time like a national holiday. The white cowboy hat was sighted once again floating in Lake Ontario. I don’t like to kick a guy when he’s down, but this guy makes it easy.

On the sad side, Phil Wentworth, a good friend and one of the nicest people I have been privileged to work with, has passed. He was an assistant race secretary to Joe De Frank at the Meadowlands in the heydays along with Joe’s son Doug and Dandy Don D’Andrea. I also raced for Phil at the Red Mile and Pocono Downs. R.I.P.

Could someone out there please update me on the Gareth Dowse / Josh Marks situation and the Rick Zeron appeal? How is it that our commissions move slower than a toad?

IT JUST DOESNT END. I just heard there was a Marks sighting at the What Cheer, Iowa fair last weekend, with some remarkable form improvements. My sources say that there was a complaint registered with the Fair Board and they said they couldn’t remove him from the grounds. We need Inspector Clouseau immediately.

The days of seeing a Niatross or a Muscle Hill are over… We are going too fast right now and we must not keep up the pace as the attrition will bury us. The thoroughbred has not increased its speed for 100 years, yet the standardbred seems to go faster year by year. I feel we are at the breaking point. New training methods, breeding a racier horse, supplements, new bikes and, most of all, blood doping, is killing the sport.

Realize this: the guy that uses performance enhancing drugs (PEDs) not only is hurting his horse but killing the trainers that are drug free and trying to keep up to get checks. The situation is out of control, and I wish I could give you a concrete opinion as to how it can be rectified, but aside from a new improved test for EPO I am at a total loss.

It’s the midpoint of what will prove to be the fastest year in our sport to date. Speed not only injures, but also tires. Look at last weekend’s results and all the odds on horses that went down. Lather Up, Bettors Wish, and Captain Crunch all one to five or shorter. Were they all driven poorly, sick or lame , no, they have been going ridiculous speeds week after week and it caught up to them. They all race well but not the same as they had been. Just too much too often.

How about a throwback in time. Watching the odds board at Yonkers for the Messenger, it reminded me of the 1960s and the Eddie Cobb days when with a minute to post the Cobb horse would plummet from 12-1, to 6-1 to 3-1 and run off and win by open lengths. This was not quite the same but American Mercury took a big late odds hit against the 1-9 Bettors Wish forcing his odds up to 4-5 temporarily. Now Yonkers handle in 1965 was far bigger than today’s handle, but it was so noticeable that the eloquent Frank Drucker took notice and remarked to his TV audience. Someone in the Oakes camp had a good night. Note, the Yonkers handle that evening was in excess of $1,000,000 so to rattle the board took more cash than usual.

Long-time friend Jackie Rice asked me 30 years ago when we were having breakfast one snowy morning in the track kitchen at Monticello Raceway, “What is the secret to being a truly successful trainer?” Jackie said, “You gave me the best advice anyone has ever given me to this day. You said to me, everyone nowadays is worried about pre-racing horses. You said, ‘Jackie, the most important thing to being successful and winning races is fitness and post racing… never miss a day if possible and make sure your horses are hydrated and sound.’ I will never forget the day you and I got into my pickup truck and salted the hill leading to the track with our own store bought Rock Salt so we could jog our horses when everyone was giving the day off. I still never miss a day and care a lot about hydration.”

Thanks for the fond memories and I am proud of what you have accomplished in this very difficult business. You are a great role model both as a husband, father and horseman.

Paul London asks: I see more and more horses being purchased from New Zealand and Australia. They say it’s because of Lasix not being permitted, but it’s also not allowed in Sweden. Why don’t people buy trotters from Sweden, the shipping would be far less expensive?

Actually there are two very good reasons. One, there are all sorts of opportunities to race indigenous horses because Swedish racing is in many instances attached to a lottery called the V75. This creates a purse structure where less talented horses race for more money than they would in the U.S. Therefore, the horses value is far more in Sweden than here. For example a 2:00 trotter could win 25,000 euros in Europe and would be a $3,000 claimer here.

Two, the Swedish game at the top is to import not export. It is highly unusual for a top trotter to be sold to the U.S. In recent times, we have seen some Swedish owned and bred horses come to America to race, but they remain Swedish owned. The racing opportunity in Europe for a top tier horse is so much better than in the U.S. Our racing is basically about 2- and 3-year-olds. After that, the money dwindles. Every week in Europe there are races for $200,000 or more for older horses, often more than one a week. Shipping from Stockholm to Paris or Rome is like shipping within the United States.

With the exception of Moni Maker, most of the $4 million dollar-plus earners as older horses made their fortune on the other side of the pond.

Clay Horner asks: As we look to sale season, I recall Jimmy Simpson saying it is hard to make a rational case for buying a pacing colt for more than $100,000. I note that six colts that sold at auction and raced in the Pennsylvania Sires Thursday and finished 1, 2, 3 only one sold for more than $100,000 and the average was $42,500 for the remaining five. Does this suggest that the smart shopper should forget about colts over $85,000 (ironically enough, to have bought either Captain Crunch or Bettor’s Wish)?

It all depends first on your pocket book and then on what you are trying to achieve. I could pick out nice pacing colts for under $100,000 all day long if your desire is to have fun and win a race here and there or have a nice Sires Stakes colt.

However, if you are looking to hit a home run and come up with a top syndicated stallion in today’s market it would be very difficult. Pedigree, pedigree, pedigree is sooooo important when looking to stand a stallion. Today’s market with the increasing amount of high-powered partnerships has changed the model entirely. When you spend the money and have the perfect colt you reap the rewards. Captaintreacherous is the perfect example. The group spent $250,000 to buy him, then earned a few million in purses got somewhere around $12 million with various deals at two and three and still have income from the breedings. That money goes a long way in the chase for the new star on the block. Mind you, there are no guarantees, but I am sure they enjoy the ride which is all you want. When that group goes into the ring and collars one for $400,000 they aren’t going into their pockets, they are playing with house money.

That house money doesn’t go very far in that game and when you play at those stakes you better come up with a new champ every five years.

To the average owner looking to have fun, don’t worry about the legend builders, let them do their thing and you do what suits you.

Please take note I am not a fan of indigenous racing. I feel it creates mediocrity and has a deleterious effect on the sport overall. If you don’t have a large pocket book go to the sale looking for a world champion, not a colt that can race in your state or province, you will be better off in the long run. Who knows, you may come up with a Bettor’s Wish for $20,000.

Coming next week, with the Lexington Selected Yearling Sale catalogue as spectacular as I have ever seen, will we witness the first $1 million yearling to sell at public auction? With offerings like the brother to Greenshoe, and the first foal of Mission Brief the possibilities abound.

Thanks for all the kind words. Please keep the questions coming in. Lots more Grand Circuit action at Mohawk Thursday, Friday and Saturday, as well as the Ewart and The Hill at Scioto Downs Saturday and the Sires action keeps rolling at Red Mile.