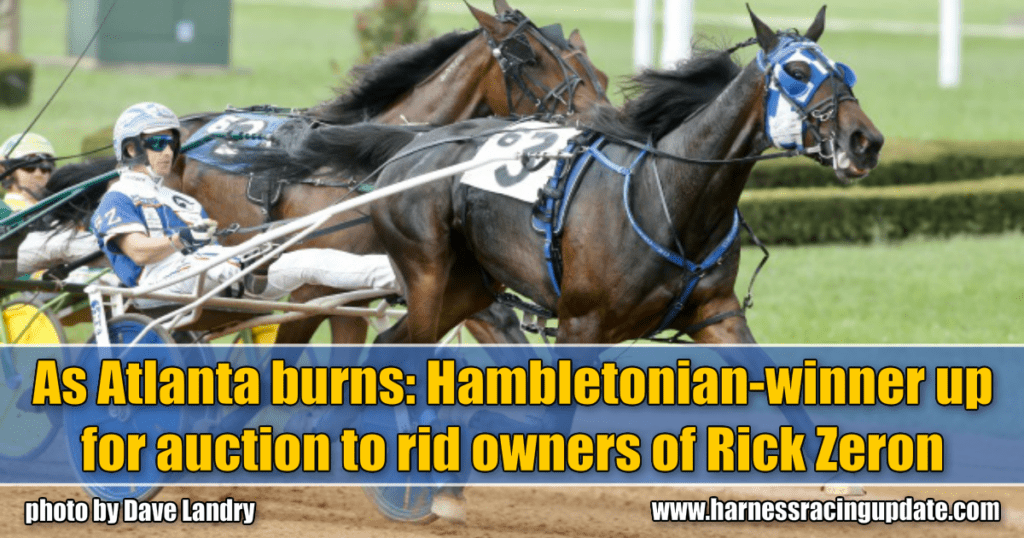 As Atlanta burns: Hambletonian winner up for auction to rid owners of Rick Zeron

Owner Brad Grant said the four majority owners of Atlanta are united in selling the star trotter on OnGait.com in the hopes of retaining her without her troubled trainer.

Prominent horse owner Brad Grant said he’s disappointed and embarrassed that his Hambletonian-winning filly Atlanta is up for auction at onGait.com (view listing info here), but said he and the trotter’s three other majority owners are united in the cause of getting Atlanta out of the hands of her trainer Rick Zeron.

“It’s a choice that had to be made to… remove Rick,” Grant said Thursday.

Atlanta is scheduled to be up for auction until 1 pm (Eastern time) today (Feb. 15). As of 10 pm Thursday the bidding had reached $1.1 million.

“The group as a whole – 95 per cent of the ownership — got tired of five per cent basically treating it like it was his horse and his alone,” Grant said.

The issue came to a head Tuesday (Feb. 12) at the Sunshine Meadows training center in Florida. “It was agreed on by the four of us, the 95 per cent ownership group, to move the horse to Tony Alagna’s barn. I directed Tony to do that. He did that,” said Grant, who also has horses with Alagna whose shedrow is adjacent to Zeron’s at Sunshine Meadows. “Later that same day, Rick told his man (Ernie Hendry) to go get the horse. So the guy that owns five per cent is dictating the whole process. When he went to get her, Tony called me and I said, ‘Tony, this isn’t your fight at this time so don’t get into a confrontation…’ I can assure you if I would have been in Florida, Ernie would not have been picking the horse back up.”

Zeron told HRU via text that he declined an “offer of $50,000 for my five per cent,” from the other owners, “as I feel she is well worth in excess of that. Therefore all the partners agreed to listing her on OnGait.

“We couldn’t agree on a price and due to February 15 being stake payments, the only way to have her eligible to all the stakes was to sell,” Zeron said. “The owners agreed to buy her back at a certain price, but if she brings the type of interest I think she should, then anyone can have her.”

Grant said the owners want to separate themselves from Zeron for reasons that go far beyond the fact the trainer is appealing a stiff six-month penalty and $10,000 fine from the Alcohol and Gaming Commission of Ontario (AGCO) (full story here) that led to Atlanta being stripped from contention for Canada’s O’Brien Awards. Depending on the outcome of today’s auction, Grant may further clarify what’s behind the owners’ beef with Zeron.

Michelle Crawford was contacted via text by HRU for comment and said only that she “can’t talk about it right now (because) this is so upsetting.”

Woodbine Mohawk Park president Jessica Buckley said the new integrity rule in place at her track and partner tracks in province, would not have prevented Atlanta from racing in Ontario if she had remained in Zeron’s care since his AGCO troubles are not predicated on a positive test.

“The new integrity rule only covered positive tests (class 1 and 2 and TCO2),” Buckley said. “Therefore, it would not have come into play in this case.”

However, Jeff Gural said Zeron is currently not welcome at his three tracks — the Meadowlands, Tioga Downs and Vernon Downs — and, therefore Atlanta “would not have been eligible which is why she is being sold, I guess, to get rid of (Zeron).”

For the moment, Grant said the owners are united in going hard to retain Atlanta.

“We don’t have to bid until (Friday),” Grant said. “My personal opinion on this one will be, if you want her you’re going to earn her, because I’m not prepared, and my partners are not prepared, to give up on this mare. There’s a ton of future with this mare and I’ve spent a lot of money on bad horses so I’m at least going to spend it on a good one.”

Grant said it’s clear Atlanta’s stellar performance in 2018 — a year in which the daughter of Chapter Seven out of Hemi Blue Chip earned over $1 million and the Dan Patch Award as sophomore trotting filly of the year — is not the least bit tainted by Zeron’s legal troubles in Ontario.

“First of all, whatever went on (with Zeron) went on in Canada and this mare was not in Canada at any point for any time,” Grant said. “Not for one second do I believe that Rick did anything illegal with this mare. She passed every test, every stakes barn, the whole nine yards. There’s no issue in my mind that this mare (raced clean).”

That said, the souring of the relationship with Zeron has tainted how the other partners remember her accomplishments.

“The disappointing part is to see a wonderful mare and the year we’ve had and not been able to enjoy it because of Rick and the way Rick handled things,” Grant said. “I’ve never seen anything where one individual can try to control a situation. I think it’s embarrassing.

“It’s disappointing and it makes a person wonder why the hell you’re in this business.

“I’ve never had an issue with anybody and it just galls me that a guy that had five per cent of this horse has embarrassed this industry, himself, and discredited this mare without one ounce of remorse.”