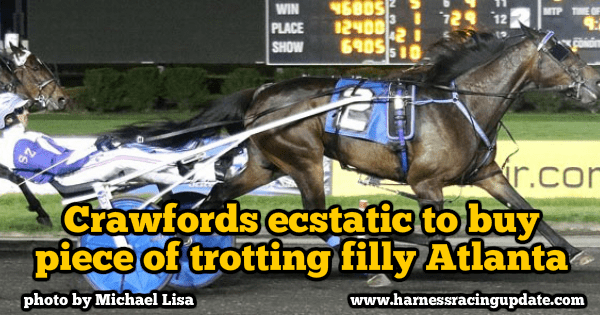 Michelle Crawford said she will retain the filly as a broodmare when her racing career is done. In the meantime, she said she’s so excited for the trotter’s next start that she might need to be medicated.

Michelle Crawford said she was kidding when she told Rick Zeron she was purchasing a piece of his stellar sophomore trotting filly Atlanta as a Father’s Day surprise for her husband, Albert Crawford.

“(Albert’s) not my father,” Michelle said, laughing. “I thought about surprising my husband, but I have to be honest, with something this large I never go off on my own. There’s never a time where I make a decision like that without the two of us together.”

The deal, which was completed Tuesday and was brokered by Anthony Altomonte, gives Crawford a major portion of Zeron’s 25 per cent share of the daughter of Chapter Seven out of Hemi Blue Chip. The filly’s other owners — Holland Racing Stable of Niagara-on-the-Lake, ON, Howard Taylor of Philadelphia and Brad Grant of Milton, ON — have retained their percentages in the trotter.

“I’m ecstatic to have Michelle, Albert and the Crawford family as part of Team Zeron and the Zeron family,” Zeron said.

Michelle said she has, “the right to have (Atlanta) as a broodmare after she’s done racing… That was really the only way that I was going to spend money. I think that was the caveat. If I couldn’t get that, I probably wouldn’t have done it, to be honest.”

Michelle said Atlanta first piqued her and her husband’s interest when she defeated a field of older trotters and Hambletonian hopefuls in an overnight on May 11 at the Meadowlands.

“We have an aged trotter, Don Dream. He was in an overnight down at the Meadowlands and (Atlanta) was in that race and she flew by (Hambletonian-eligible) Fashion Woodchopper like he was standing still. We said, ‘That filly is the real deal. That was a huge mile,’” Michelle said. “When we saw her race in our backyard at Vernon, we were like, ‘Oh my God.’ My husband talked about her constantly, ‘Atlanta, Atlanta, Atlanta… I love the name. This filly is a freak.’ Obviously, you are looking to have interest in her as a broodmare when she’s done racing, so if she never stepped another foot on the racetrack she would still have insane value. But you can only hope.”

As for the growing debate about whether Atlanta will take on the boys in the Hambletonian or stick to the Hambletonian Oaks, Michelle said she will leave that up to Zeron. “Obviously, I’d love to go to the Hambo and beat the boys. Are you kidding? Come on, who doesn’t want that?”

Zeron said, “I’m going to leave the door open. We’ll talk it over with (driver) Scott (Zeron) and I’ll take it from there.”

“We’re excited and looking forward to her next race. I think I’m probably going to need a Valium when she goes to post,” she said, laughing. “I’m going to try not to throw up, try to stay calm and not have a heart attack. Al says one of these days I’m going to die… and it’s going to be when these horses go to post. I think the rush is just hard to explain. It might be my demise, but I’ll go happy if that’s the case.

“Honestly, (the Atlanta deal is) exciting because it’s a new partnership for us. We don’t have a lot of partners, but we’ve always liked Rick. Actually, the last time I saw him I think he drove Lockdown Lindy in a stakes race. I sat in the bike for the win photo, so I think it was good ju-ju. We’ll look at it like that.”