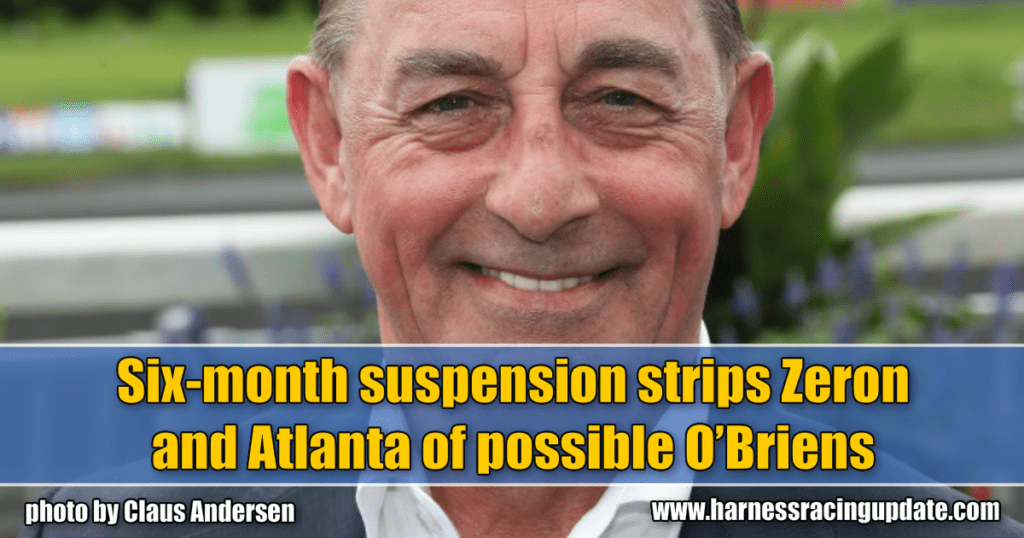 By rule, trainer’s 180-day suspension made him and his star filly ineligible for Canada’s highest annual harness racing honors. Standardbred Canada president and CEO Dan Gall explains why it was the correct decision — even with Atlanta as a favorite for the nation’s Horse of the Year award.

Standardbred Canada president and CEO Dan Gall said stripping Rick Zeron and his star trotting filly Atlanta of the chance to earn O’Brien Awards is simply the correct course of action, nothing more.

Friday, two days after the Alcohol and Gaming Commission of Ontario (AGCO) that regulates the sport in the province released a notice saying Zeron is facing a 180-day suspension and $10,000 fine (see sidebar on pg 3 for details on his suspension), Standardbred Canada announced it had disqualified both Zeron as a finalist for the 2018 O’Brien Award of Horsemanship and 3-year-old trotting filly, Atlanta, trained and co-owned by Zeron.

Though the winners of O’Brien Awards are not announced until the night of the gala, it is widely believed Atlanta, who defeated the boys in the 2018 Hambletonian, would easily win the award as Canada’s Three-Year-Old Trotting Filly and was on the short list of favorites for the nation’s overall Horse of the Year award.

Standardbred Canada has long had a policy that reads: “An O’Brien Award will not be presented to any individual or entity who has served, or is currently serving a penalty for a continued period of 180 days or more during a calendar year. If the penalty continues through any part of the following calendar year, said individual is also ineligible for an O’Brien Award in the second year of the penalty. Outstanding appeals and/or stays do not alter the conditions of eligibility for O’Brien Award consideration.”

Two messages to Zeron requesting comment were not returned prior to press time, but whether he appeals the AGCO suspension is irrelevant, Gall said. The rule is clear.

What was less clear at press time was whether Zeron’s suspension and fine will strip Atlanta of the Dan Patch Award she has already earned from the United States Harness Writers Association (USHWA) as the nation’s top sophomore trotting filly and whether it will impact her eligibility for both the Trotter of the Year and Horse of the Year awards yet to be announced. HRU has asked for clarification from USHWA and will provide an update when information is available.

The trigger for Zeron being declared ineligible in Canada was the 180-day suspension, Gall said. That explains why Caviart Ally is still a finalist for an O’Brien Award in the Older Pacing Mare division. Her trainer, Noel Daley, is facing a similar suspension for alleged shockwave therapy violations as Zeron, but Daley’s 90-day suspension from the New Jersey Racing Commission (see sidebar) is below the O’Brien Awards’ threshold to be declared ineligible.

Gall said he thinks, “the O’Brien Awards committee needs to review that (threshold) and discuss whether that 180 days should be less. I do think it needs to be less. We need to be a lot more restrictive in the way we’re giving out the awards, for those that are getting in and qualifying. That would be my position going into our committee discussions and that’s what I would be lobbying for.”

Asked what number of suspension days might be acceptable, Gall said, “What about zero? I’d love to hear why there should be an exception and I’m sure I would hear that, but my starting point would be why are we looking at horses or trainers that have any kind of a suspension going into these awards?”

Gall said O’Brien Committee chair Bill McLinchey of Woodbine said he would like to set up a meeting as soon as possible to examine the possibility of altering the integrity portion of the eligibility rule.

As for the Zeron case, Gall said Standardbred Canada was thorough in its deliberations before it came to a decision.

“When this was brought to our attention by the AGCO ruling, we obviously read it and we wanted to make sure we understood what all of the infractions were and it was a long list of them. Automatically, internally from an administration position, we knew that we had to disqualify Mr. Zeron (from being a finalist for the Horsemanship Award),” Gall said.

“Then we had the discussion about the three-year-old filly Atlanta. We were looking at that aspect as well – how does this or does it impact that horse? The administration believed that there was a serious discussion that we needed to have about the horse because Rick is not only the trainer, but he is also a co-owner. As a co-owner, we viewed that as an ‘entity’ because if you look at our policy it is for any individual or entity currently serving a penalty of 180 days (or more).

Gall said the next step was to communicate the decision to Zeron and Atlanta’s other connections. That happened Friday morning, followed by a press release being issued Friday afternoon.

“We wanted to be as hands on the table as we could, with respect to the decision, to explain and talk to the co-owners and then make the announcement,” Gall said.

He said it was well understood the decision would lead to more bad press for a sport that has had more than its share, but in the initial deliberations he said he asked his team at Standardbred Canada to put aside politics and determine the correct course of action.

“I think, as an industry, we need to start asking those kinds of questions, ‘What’s the right thing to do on this one?’ I think there’s a lot of people that would have some very good input and insight on it, but we need to start focusing on the integrity of the game and of the sport and celebrate that piece, as opposed to worrying about what the political fallout might be or whether we win a popularity contest or not,” Gall said. “We just want to do the right thing.”

What rules did Zeron and Daley allegedly violate?

6.05 — Any attempt to violate any of the rules of the Commission falling short of actual accomplishment shall constitute a violation of the Rules.

6.17D — A person, at any time or place, shall not against any official or participant: (d) engage in any improper conduct.  6.20 A, B, C — A participant shall be considered to have violated the Rules:

(a) for any misconduct which is injurious to racing although not specified in these rules;

(b) for any misconduct prejudicial to the best interests of racing; or

(c) for committing or attempting to commit any other act injurious to racing.

(d) which is not labeled, or accurately labeled, with the contained drug, substance, medication, or active ingredient.

6.52 — The use of Extracorporeal Shock Wave Therapy or Radial Pulse Wave Therapy shall not be permitted on any racehorse unless the following conditions are met: (a) the treatment took place a minimum of 4 days (96 hours) prior to competing in a race;

(c) any treatment received while on the grounds of the Association was through the use of an Extracorporeal Shock Wave Therapy or Radial Pulse Wave Therapy machine owned and operated by a veterinarian licensed by the Commission; and