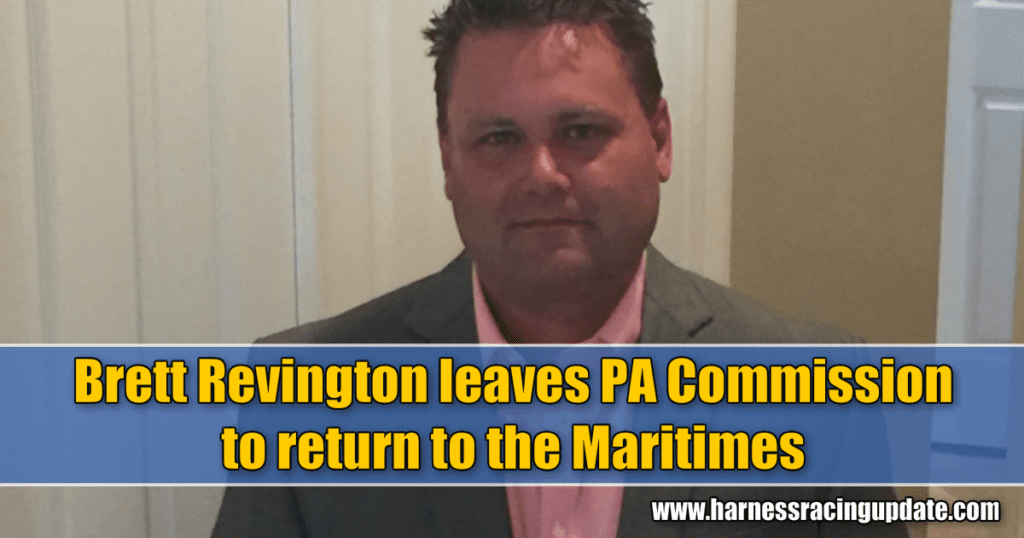 Revington returns to the Maritimes

Weeks before the official announcement, rumors of Brett Revington’s return to PEI were already circulating at regional racetracks. “I thought it was hush-hush, but it wasn’t,” he said with a laugh.

“We were looking to get back home (to Canada). I’m from Lucan, Ontario and my wife is from Ilderton (Ontario). We wanted to get back to the Island, be close to family,” he told HRU, days after starting his new role on Jan. 14. Brett and wife Karen have two children, 13- year old Brooklyn and 10-year old Zachary, and wanted them to grow up near their grandparents in PEI.

Brett’s love of the game is lifelong, fuelled by following favorite horses like Admirals Express, Hardie Hanover, and his parents’ OSS/OJC mare Angels Uprising (p,4,1:52.4s; $309,187). “My grandparents owned horses and I made frequent trips to Western Fair Raceway with them, from a very young age. We visited most of the tracks in southwestern Ontario. We made frequent trips to Windsor, Sarnia, Clinton, Greenwood, and Mohawk — a family thing.” A few years and jobs after graduating from the University of New Brunswick, Revington landed a position with Woodbine Entertainment Group, hired to do data entry in the Mohawk race office and later adding stakes manager duties. “That’s where I learned how to chart. It was a good exposure to a lot of roles within the industry.”

His first regulatory position followed: Revington became an associate judge with the Ontario Racing Commission. From there, he spent a “very short stint” as general manager at The Raceway at The Western Fair District. He was recruited by a search firm working for Atlantic Lottery Corporation (ALC) to help revive the PEI racetracks now known under its “Red Shores” banner, a job he began July 26, 2010. Newly-hired racing experience manager Revington collaborated with marketing and promotion manager Lee Drake and senior supervisor of racing Adam Walsh to recast historic tracks at Charlottetown and Summerside as modern wagering venues. Betting gained momentum at Red Shores Charlottetown: Between 2011 and 2016, handle increased from $2.3 million (Cdn) to $3.4 million (Cdn).

“They just needed a fresh pair of eyes,” he said. “They had just been taken over by the ALC. It was a new day. Distributing the signal and tweaking the wagering profile — that’s one thing we did that helped out. We changed our (simulcast) graphics package to get up to the current era. I don’t think there’s any one thing that made it work or not.”

He resigned from Red Shores in November 2013, surprising many in the industry, and resurfacing as director of racing at Isle Casino Raceway Pompano Park in August 2014.

“The opportunity came up, and I happened to be the candidate,” said Revington of his tenure at Pompano. “I take a lot of pride in what we did down there. We brought the ‘Winter Capital of Harness Racing’ back.”

As in PEI, Revington went to work on the wagering menu and promotions, turning around a particular bet by reducing takeout and publicizing the wagering product. “(Pompano announcer) Gabe Prewitt was a big factor, and (distributing) press releases and a race wrap-up as well. I wanted it to be on the USTA and SC, to be able to read about Pompano every day,” he said.

The Florida track’s “signature wager” was the Pick 4, which was in the doldrums when the new director of racing arrived. “Talking to people, they struggled to get $1,500-$2,000 in the Pick 4 pool. They would often have to hold up the race for 10 or 15 minutes to get the guarantee. (Takeout) was around 22-24 per cent, so we introduced an industry low of 12 per cent (takeout) on that.”

Coupled with offering live cards on Sunday nights, when major competing tracks were idle, Revington’s Pompano Pick 4 gamble paid off handsomely: “It was like a red flashing light, to get them attracted to our signal again. It worked.” (In 2013, all-source wagering on the track brought in less than $25 million; in 2015, bettors sent $44 million-plus through the actual and online Pompano windows).

Because horseplayers prefer large field sizes, Revington turned his attention to the problem of racehorse recruitment in his second year. “You’re on an island — you really have to rely on horsemen who have migrated south for the winter,” he said. Promoting the ‘Winter Capital of Harness Racing’ worked so well that some horses had to be stabled at two nearby training centres and others were turned away. “We all worked together: Our purses had gone up that first year, the handle had gone up dramatically, and the sunshine is always a factor.”

Despite the sunshine, dark clouds appeared on the horizon.

“So I applied to Pennsylvania,” Revington said of his next career change. “The reason I applied is, there’s a movement in Florida called ‘decoupling’. In my second year, it looked like it was coming in. My boss told me to start looking for a new job.”

Decoupling is the separation of racing from other forms of gaming in the same venue, meaning that racinos are no longer obligated to play host to live racing as a condition of eligibility for other gaming licences, e.g. for slots or table games. Revington feared that Pompano would be subject to decoupling within the year (2015), as the Florida House and Senate both proposed decoupling for state greyhound tracks. “I think it was approved and had a lot of momentum to happen (to harness racing) that one year. Thankfully it didn’t, and Pompano is still going strong. I was sole provider for the family, so I didn’t have much of a choice. I talked to people down there who were hearing the rumors for 10-12 years.”

Revington’s new position in Pennsylvania came with some advantages over his jobs in less-prosperous racing jurisdictions. “We did a lot of new things there: We got the out-of-competition testing launched. The purses are high. We don’t really see horse shortage as much as other places due to the strong purse structure ,” he said. “I was the regulator for the three harness tracks — The Meadows, Pocono and Chester (Harrah’s Philadelphia), and the fairs. They have a very strong fair program there as well. Twenty fairs. They have very solid purses, where you can make a living at it. It’s another tier, a grassroots place for people to learn the trade.”

When HRU questioned Revington about the controversy this past summer in Pennsylvania (full story here), he simply stated he stood by the statement the Standardbred Bureau of the Pennsylvania State Horse Racing Commission issued July 31, 2018, which declared that “the State Horse Racing Commission stands fully behind Standardbred Bureau Director Brett Revington and fully endorses his actions to address these issues and prevent any future such occurrence.”

The “issues” were ones which happened in Pennsylvania, while Revington was still director of racing at Pompano. September 11, 2016, Moonshiner Hanover finished second in a PA Sire Stakes event at Chester (Harrah’s Philly), and tested positive for prohibited drug oxycodone afterwards. Prior to February 27, 2018, a threshold of 100 pg/ml of corticosteroid medications betamethasone and flumethasone was permitted in Pennsylvania standardbred racehorses; when a new, lower limit of 10 pg/ml was adopted last year, two results within the former 100 pg/ml limit were erroneously ruled to be positive tests.

“Unfortunately, some lab findings were misplaced before I came in,” he said. “We felt, in talking with legal, we couldn’t legally pursue these findings due to the timing. I arrived in late November 2016; these findings were from prior to my arriving. I think honestly they were just missed.”

He said the matters only came to his attention in May 2017.

“I asked all the tracks if they had any outstanding short-term holds. That means the lab possibly found something, but they were doing more tests to confirm the findings.”

“The Pennsylvania State Horse Racing Commission was in a period of transition from the retirement of the previous director to an acting director, then myself. I implemented measures so this sort of issue won’t happen again.”

He applied for the APHRC job when it was advertised last spring, and, like other top candidates, interviewed for the position last fall. The competition closed Sept. 15, 2018; the incoming director was required to start in January 2019. “I had chosen well before any of this (Pennsylvania situation) had come to light, and then I was offered the (APHRC) position,” Revington said.

His return to PEI comes at a moment when re-envisioning Maritime harness racing is needed. “I think we always have to evolve,” he said. “We have to try new initiatives, like new technologies, to look into getting new fans, and just in general.”

Balancing innovation with a natural strength of the region is key: “What I found out in the Maritimes is we don’t lack for a good solid base. We just need to build upon it. I really feel (harness racing) is ingrained in the Maritime culture.”

The man leading the APHRC into the new year said he’s already noticed profound changes to Island life, including increased population and greater commercial/residential development, plus region-wide demographic and economic realities (e.g. aging racing participants and bettors; precarious jobs outpacing steady blue-collar employment). Revington agreed the sport’s one-time local “monopoly on the entertainment and gambling dollar” was impacted by these shifts, but he’s faced the challenge before. He met with former Red Shores colleagues Lee Drake and Adam Walsh recently, to discuss current industry issues. “I was just really fascinated with both state-of-the-art facilities,” said Revington, on the Red Shores-branded tracks he helped launch. “They aren’t afraid to take some risks, try new things. They are still that way.”

The well-travelled Revington seems to be putting down roots. He said he’s already looking into important regional matters, from the loss of race dates in neighbouring New Brunswick, to the prospect of an apprenticeship program. “It’s a win for all of us to be closer to family,” he said. “When I arrived here, Dec. 30, it was breath of fresh air. It’s home. It’s where I’m supposed to be.”